Think of Instant Pot Matzo Brei as Jewish French Toast or Fried Matzo. During Passover, we only eat unleavened bread. Matzo Brie is eaten for breakfast. 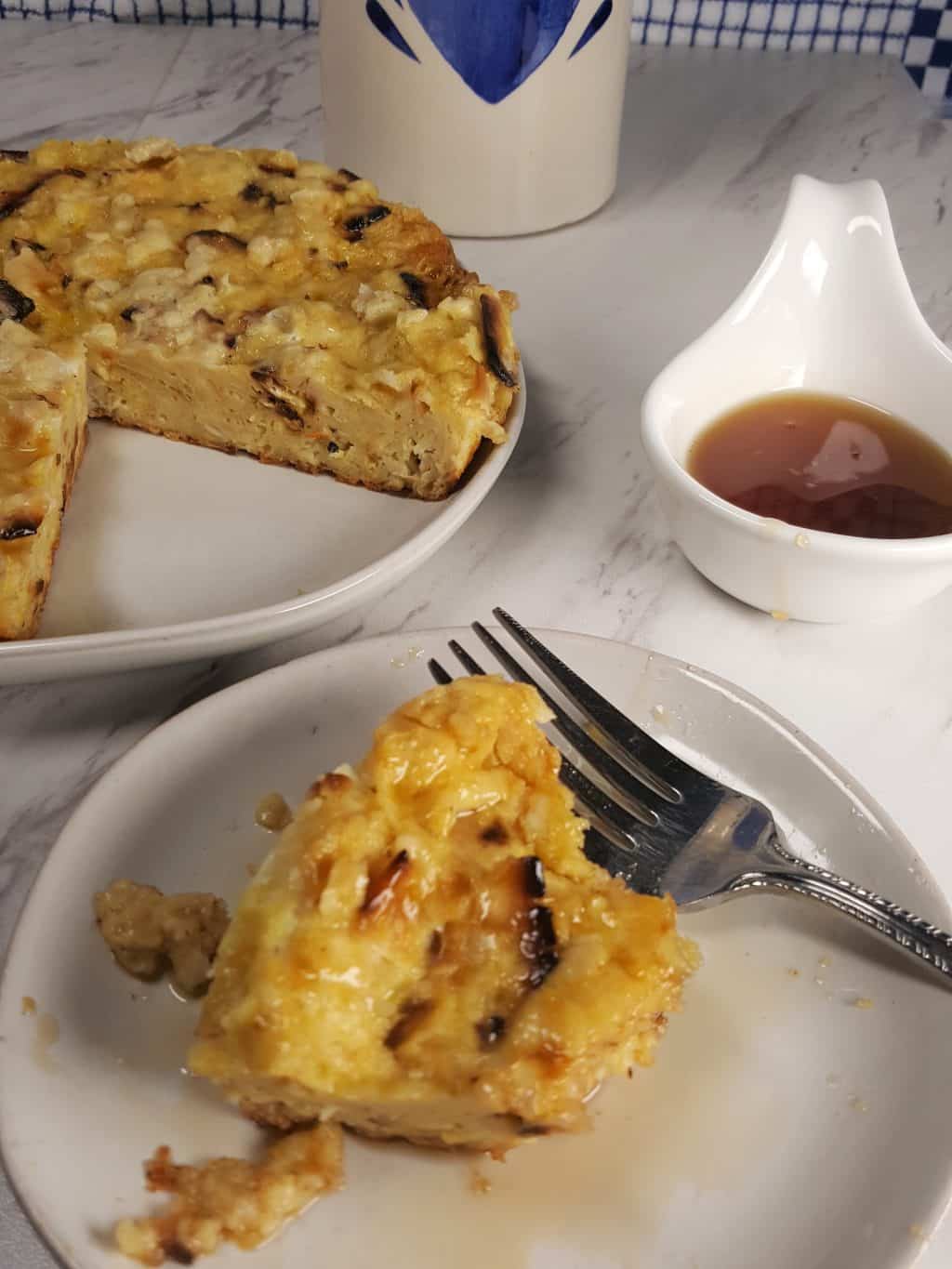 Passover is the commemoration of the Jewish people’s exodus from Egypt.

Matzo symbolizes the Israelites quick haste to leave Egypt and not waiting for the bread to rise. It symbolizes freedom and redemption. During Passover, Matzo is used in place of bread. There was no leavening agents, so the Matzo doesn’t rise and remains flat. I love Matzo so much and eat Matzo any time of the year. The more religious Jews will not eat Matzo Brie during Passover, since it comes in contact with water.

Traditionally matzo brei is cooked in a skillet on the stove. It just happens to be fantastic prepared in an Instant Pot, Ninja Foodi or Pressure Cooker too. My Instant Pot Matzo Brei recipe is so easy and it is totally hands off. Just mix up the ingredients, dump it in and push a button! 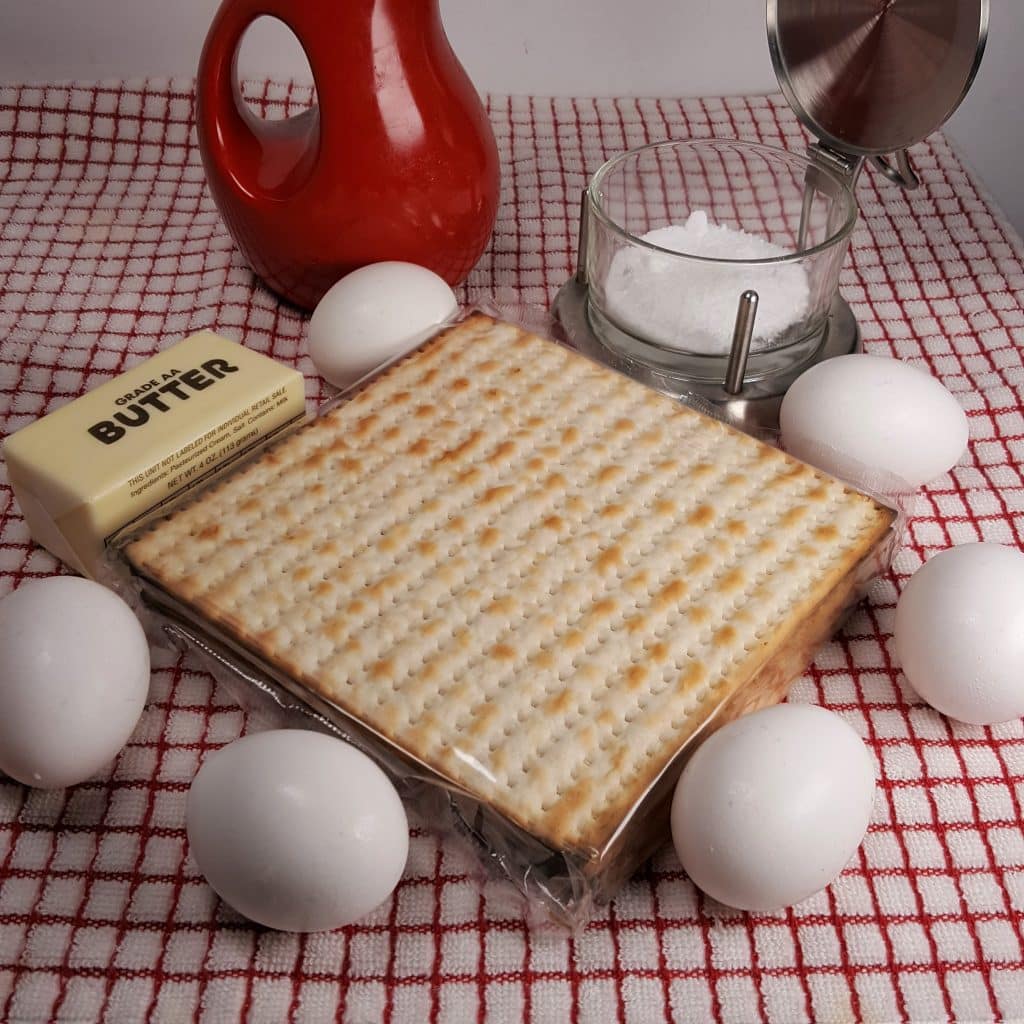 Cast of Ingredients for Instant Pot Matzo Brei for Passover

Matzo Brie is typically served at breakfast with Maple Syrup. Some people love to use Applesauce and Sour Cream. My favorite part about matzo brei is the crust and I was able to achieve a nice crust in the Instant Pot!!!

Occasionally, you will see a savory version with Onions, Salt and Pepper, but mostly, Matzo Brie is served for breakfast with Syrup. I prefer the sweet and simple version. My Instant Pot Matzo Brie only has a few ingredients and is super simple to make.

Pro Tip: Instant Pot Matzo Brei can be enjoyed all year round.

Grab a large bowl and break up the Matzo. To soften the Matzo is soaked in Fresh Water, until it is soft. 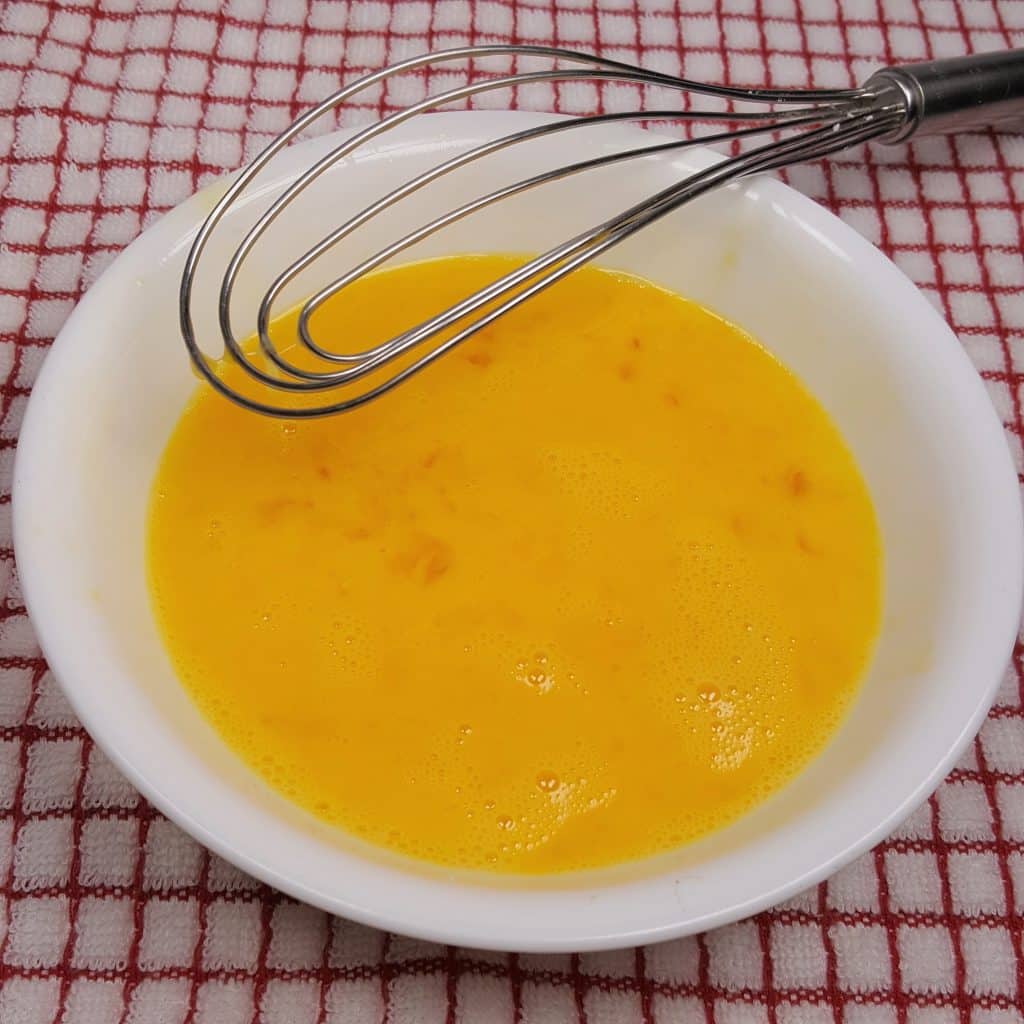 Whisk together Eggs and Water

The eggs are whisked until they are nice and frothy. I suggest my very favorite Rösle Stainless Steel Flat Whisk as it works really well to get a nice and even mix.

Matzo Brie is really awesome when cooked in Cast Iron Skillet on the Stove Top. The edges get nicely crisp, while the center is moist.

Pro Tip: A trick for a fluffier matzo brei is to add a little bit of milk or cream. A touch of ice cold water works well too. 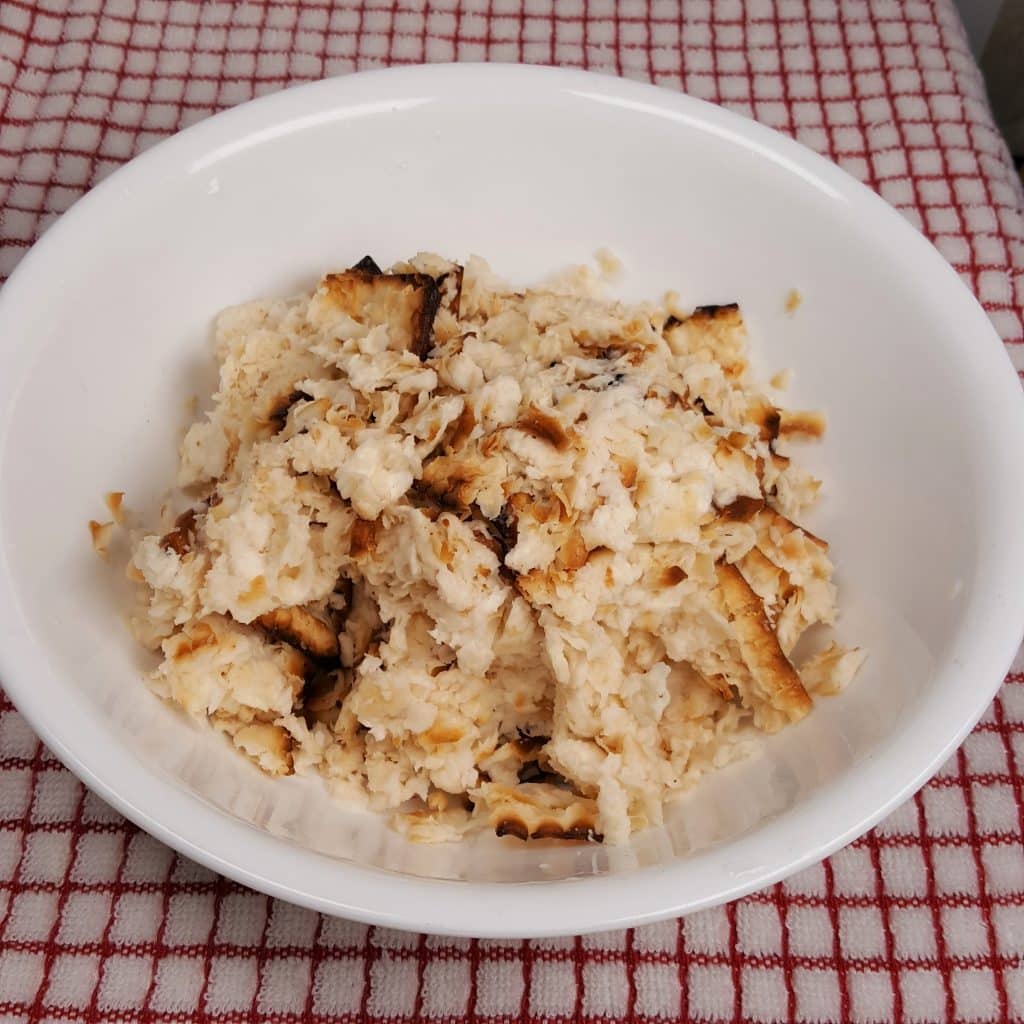 Squeeze out the Water from the Matzo

The water is then squeezed out of the Matzo.

The Secret to Crispy Matzo Brei

As a result, the center of the matzo brei will be slightly soft and the edges will be crisp. 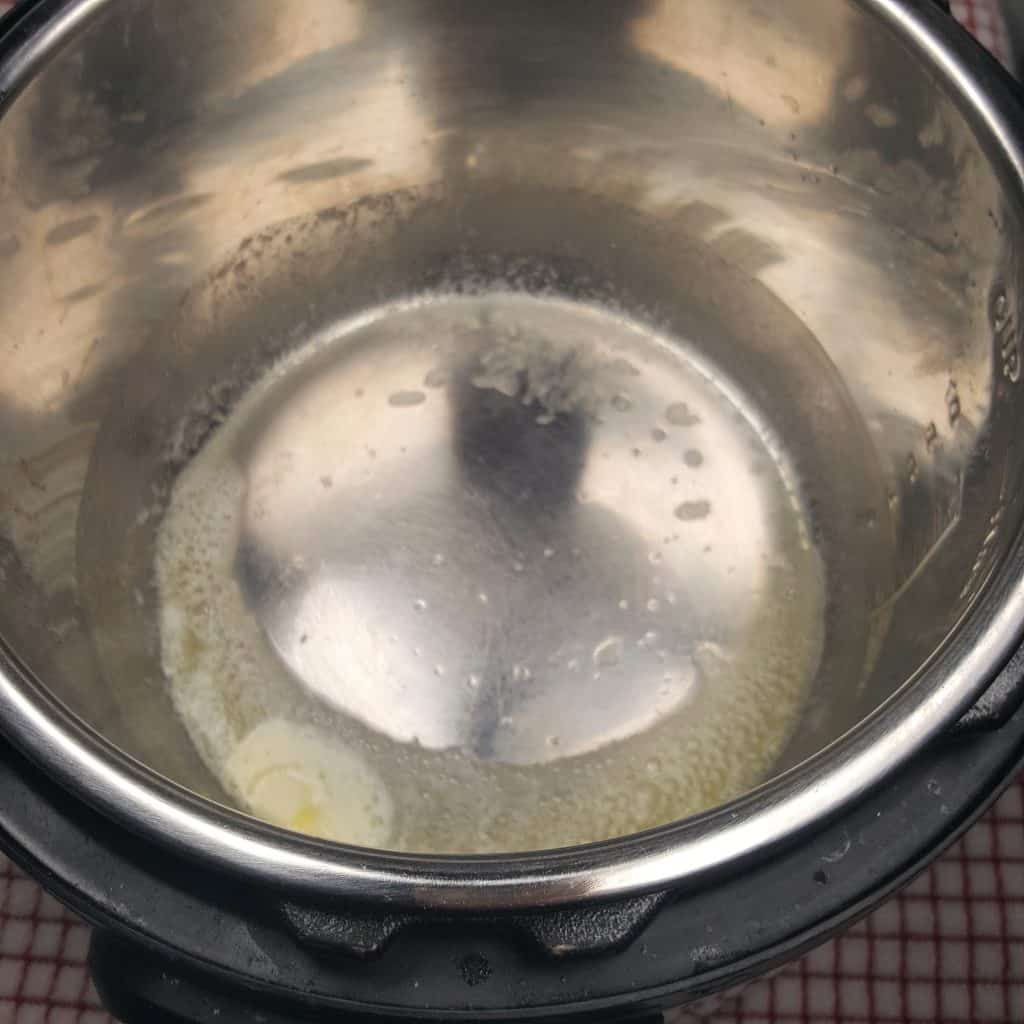 Start with a very Hot Pot

Pro Tip: Always makes sure to heat up the Instant Pot cooking pot. Then add the fat. This will help to make the pot non-stick.

In this case, I used a touch of Extra Virgin Olive Oil and Butter to help with the crisp crust! Swirl the Butter around the pot and a couple of inches up the sides. 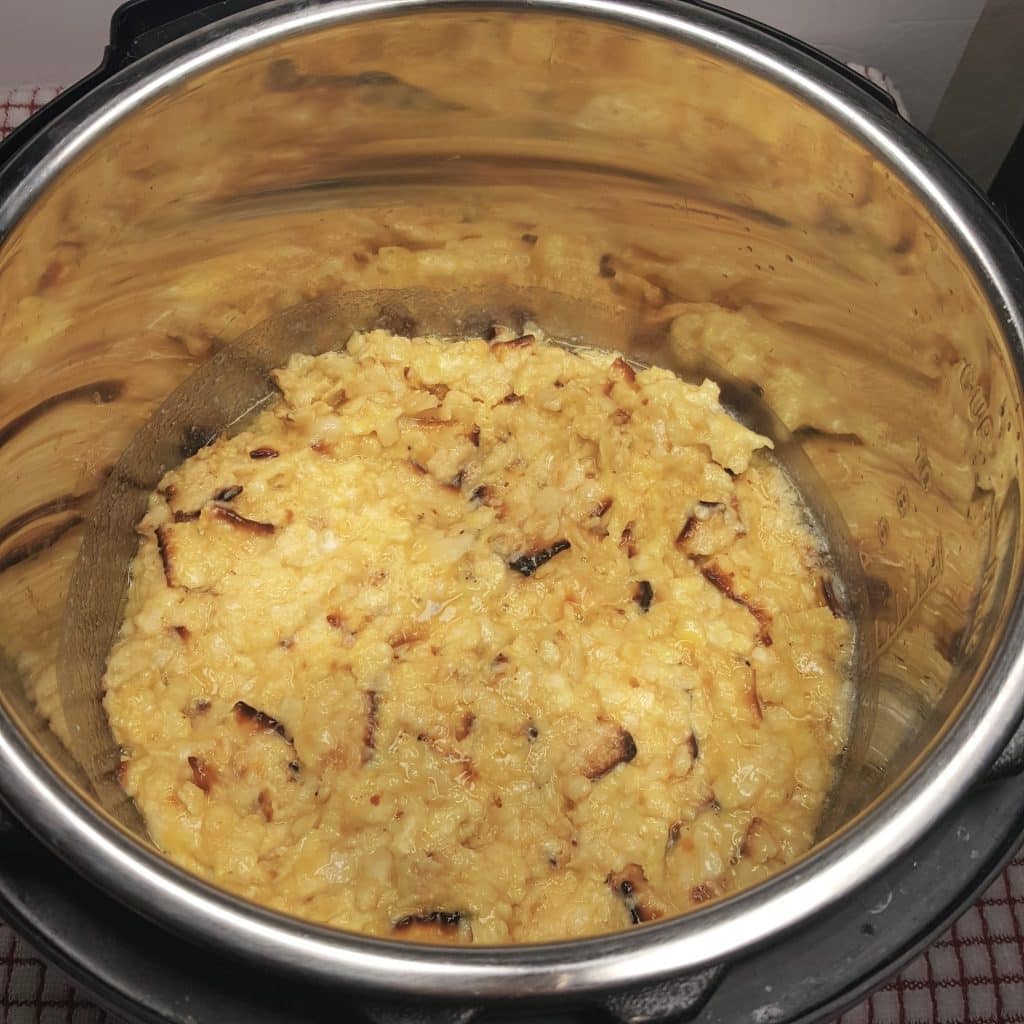 Dump the Matzo Brie right into the Cooking Pot

Right into the pot, goes the Matzo Brei Mixture.

Is Water Needed in the Instant Pot?

My personal preference is to break up the Matzo Brei as it cooks in cast iron, but for a change, it is nice to dump the mixture into the Instant Pot, Ninja Foodi or Pressure Cooker and walk away. 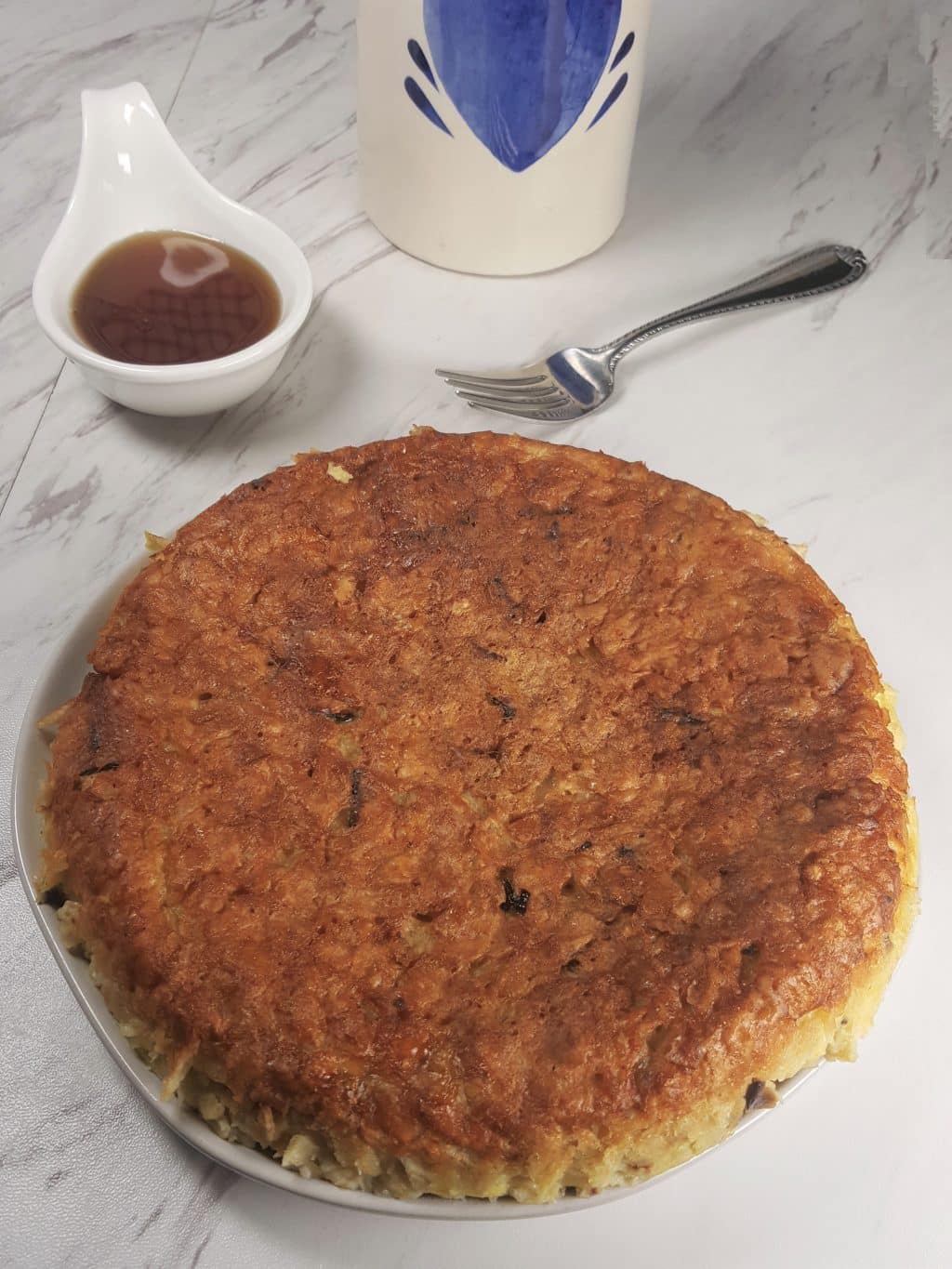 What a beautiful brown crust. This literally flipped right out of the Instant Pot.

If you like Jewish food, check out my Air Fryer Chanukkah Latkes recipes. Those are so delicious.

It is also delicious with Applesauce (there is a fabulous recipe in my new Cookbook) and Sour Cream! Oh yum.

Matzo Brei is traditionally served for Passover, but it awesome any day of the year.

Another way to make matzo brei is to skip the water and instead soak the matzo in the scrambled egg mixture. The matzo will need to soak about 30 minutes, so if you are not in a hurry, try this method. It is also how you would make the matzo brei mixture the night before cooking.

How to Make Matzo Brei In Advance

Nutrition Facts
Instant Pot Matzo Brei for Passover
Amount Per Serving
Calories 167 Calories from Fat 108
% Daily Value*
Fat 12g18%
Saturated Fat 5g31%
Cholesterol 325mg108%
Sodium 151mg7%
Potassium 132mg4%
Carbohydrates 2g1%
Sugar 1g1%
Protein 11g22%
Vitamin A 565IU11%
Calcium 60mg6%
Iron 1mg6%
* Percent Daily Values are based on a 2000 calorie diet.
Tried this recipe?Mention @ThisOldGalCooks or tag #thisoldgalcooks!
© ThisOldGal.com - Sharing the recipe link to any of my recipes posts are both encouraged and appreciated. Unauthorized and improperly attributed or non-attributed use of this material, including screen shots, copy/paste of full recipes to any social media site, website, mobile application or service (e.g., copymethat, recipe keeper, pepper) or cookbook, without the requisite attribution or otherwise with express written permission from Jill Selkowitz is strictly prohibited. You may share a photo with a link back instead. 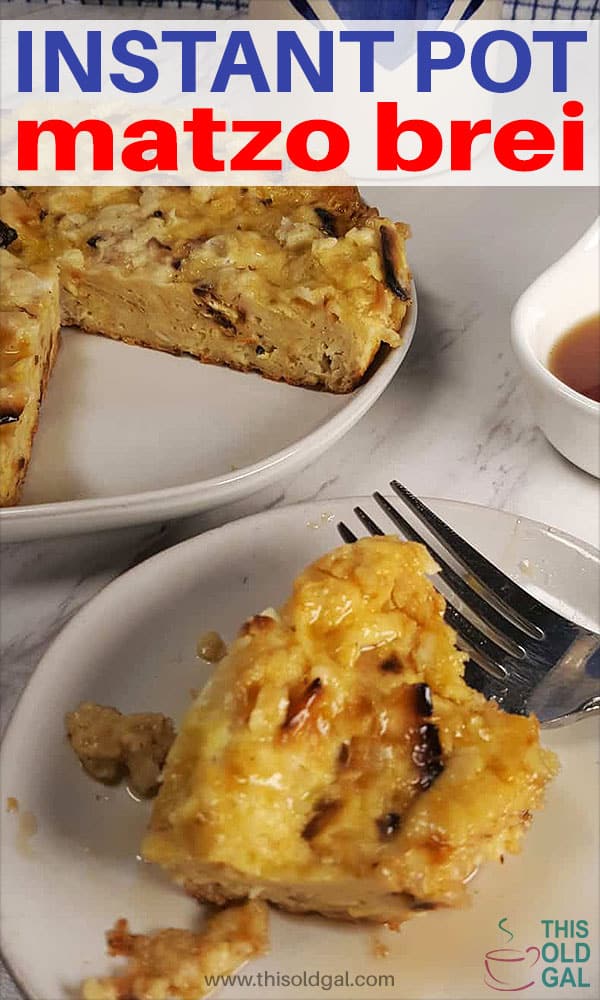