Sold on the streets of Greece, this Instant Pot Greek Gyros recipe made with beef and lamb will make you feel like you are on a Greek island. 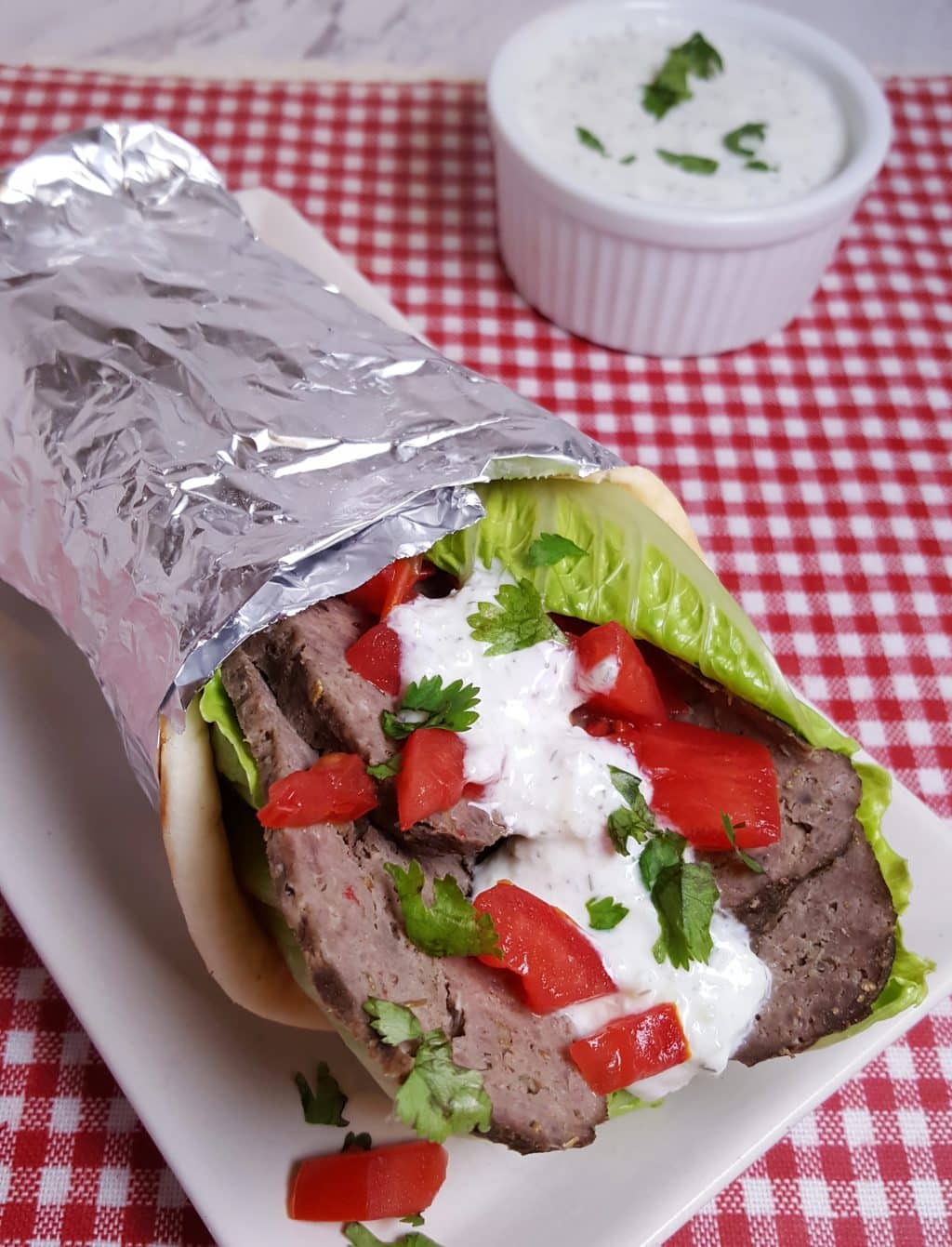 There are so many Greek restaurants around and there is always a big ole skewer of Gyros cooking on a rotisserie in the window.

That gigantic hunk of spinning meat, just enticing you to come in for some freshly shaved Gyro meat. I spent some time in Greece, back in 1985, as I went to The High School in Israel for one semester. It was an awesome program!

We travelled around the State to different places and those places, were our classroom. The school was based on the campus of Beit Berl College (בית ברל) in Kfar Saba. 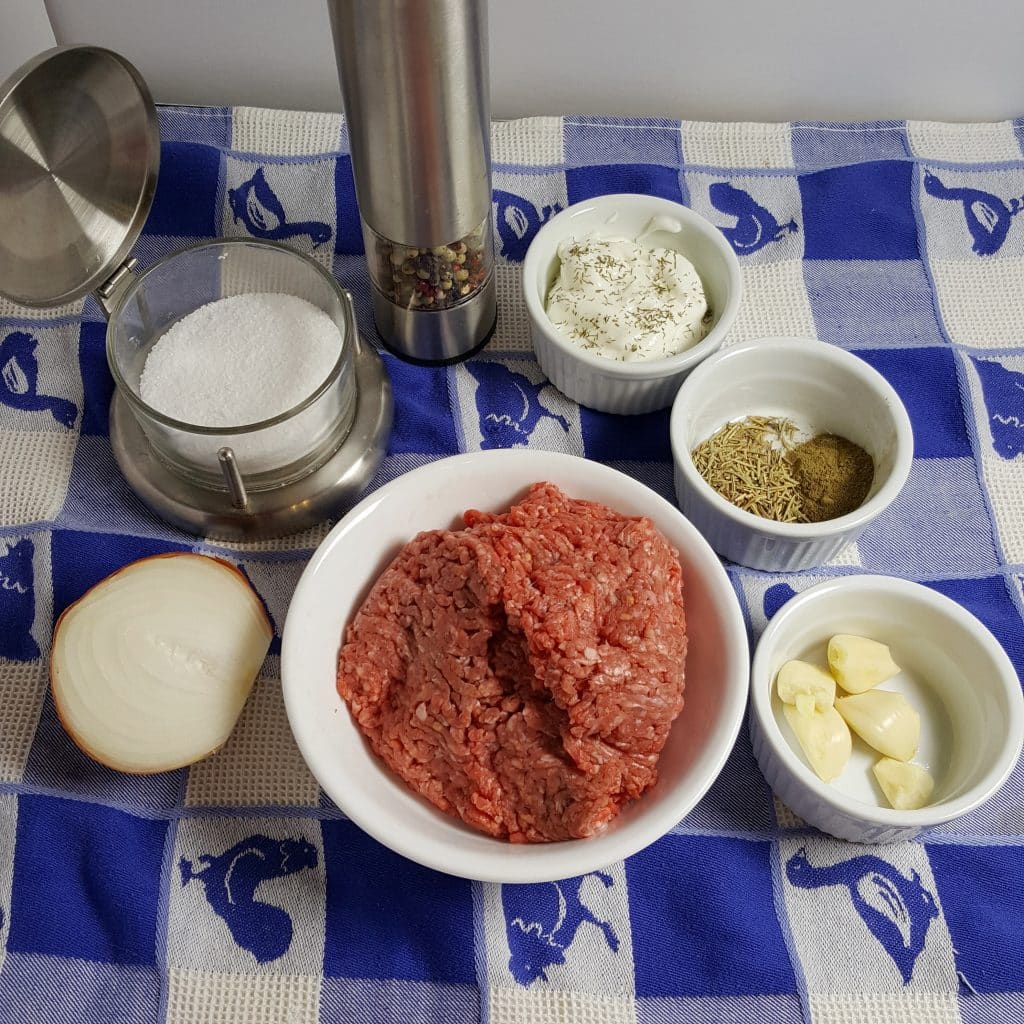 After the semester ended, my dad allowed me to stay throughout the Summer. A few school friends and I, flew to Greece and traveled around for a few weeks. The beaches and food were awesome. We slept right on the beach in Lindos, Rhodes. Three girls. It was so much fun.

We ate lots of French Fries, Shawarma and Gyros. Both Shawarma and Gyro are roasted on a rotating skewer. Gyros and Shawarma differ in flavor and texture. Gyros typically are made with Ground Lamb or Beef and processed into a Loaf.

Shawarma is made with cinnamon, cardamom, cloves and other yummy spices. Chunks of meat are combined together and cooked similarly, just not in a loaf.

As much as we enjoyed Greece, oh my, the Mikonos night life was awesome and the nude beach (a story for another day) we accidently boated to, we missed Israel and our friends. So, we flew back sooner than planned. We were all 15 years old. Things were very different in 1976. I can go on forever, but, I’ll get back to this recipe. 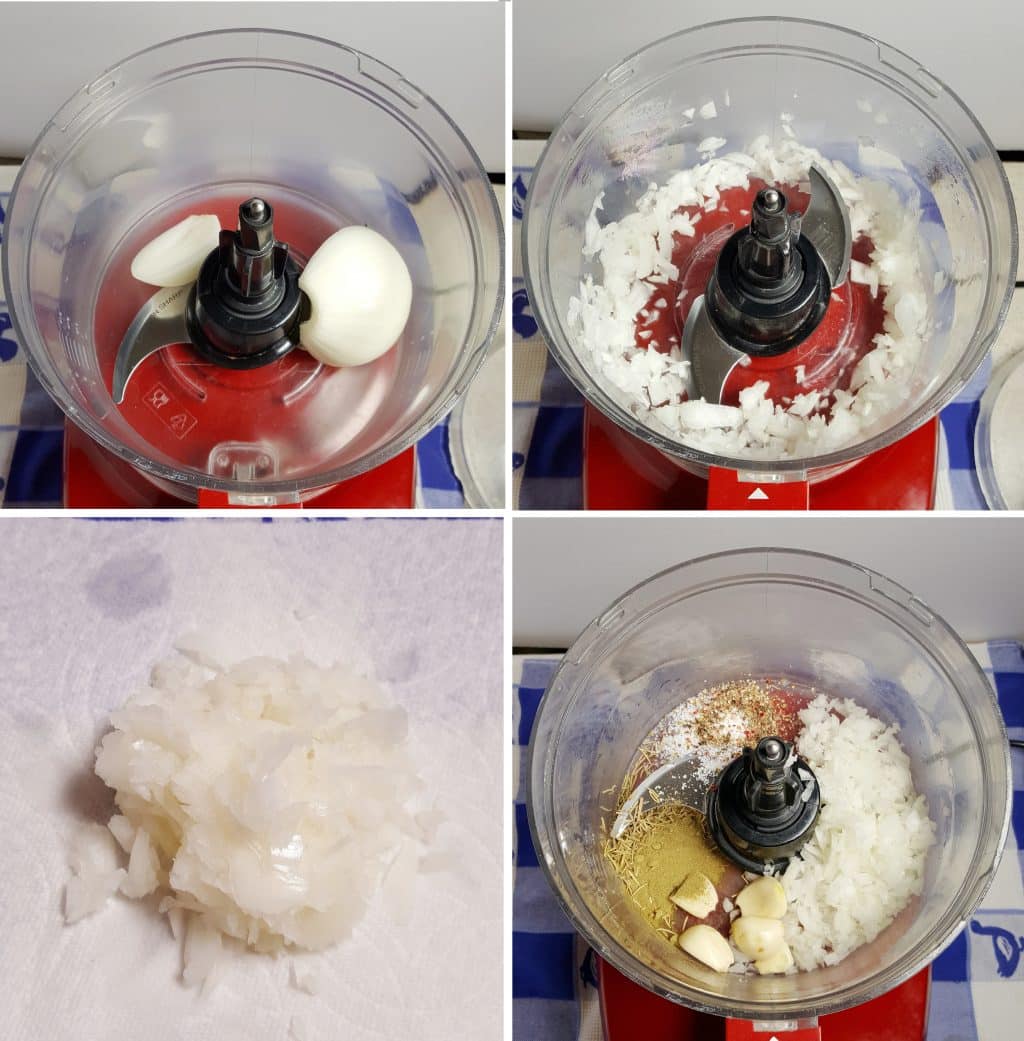 Use Food Processor or Grater for Onion

Unlike my Pressure Cooker Turkey Meatloaf, which is very moist and delicious, this Instant Pot Greek Gyros recipe, uses no fillers, to hold in excess moisture.

Can I Use Beef Instead of Lamb?

Use a Food Processor and chop the Onions well. Onions, when processed, release lots of water. Remove the Onions and put them into a paper towel.

Squeeze out all the water. Return the Onions to the Food Processor and add Oregano, Garlic Cloves, Rosemary, Marjoram, Kosher Salt and Pepper. 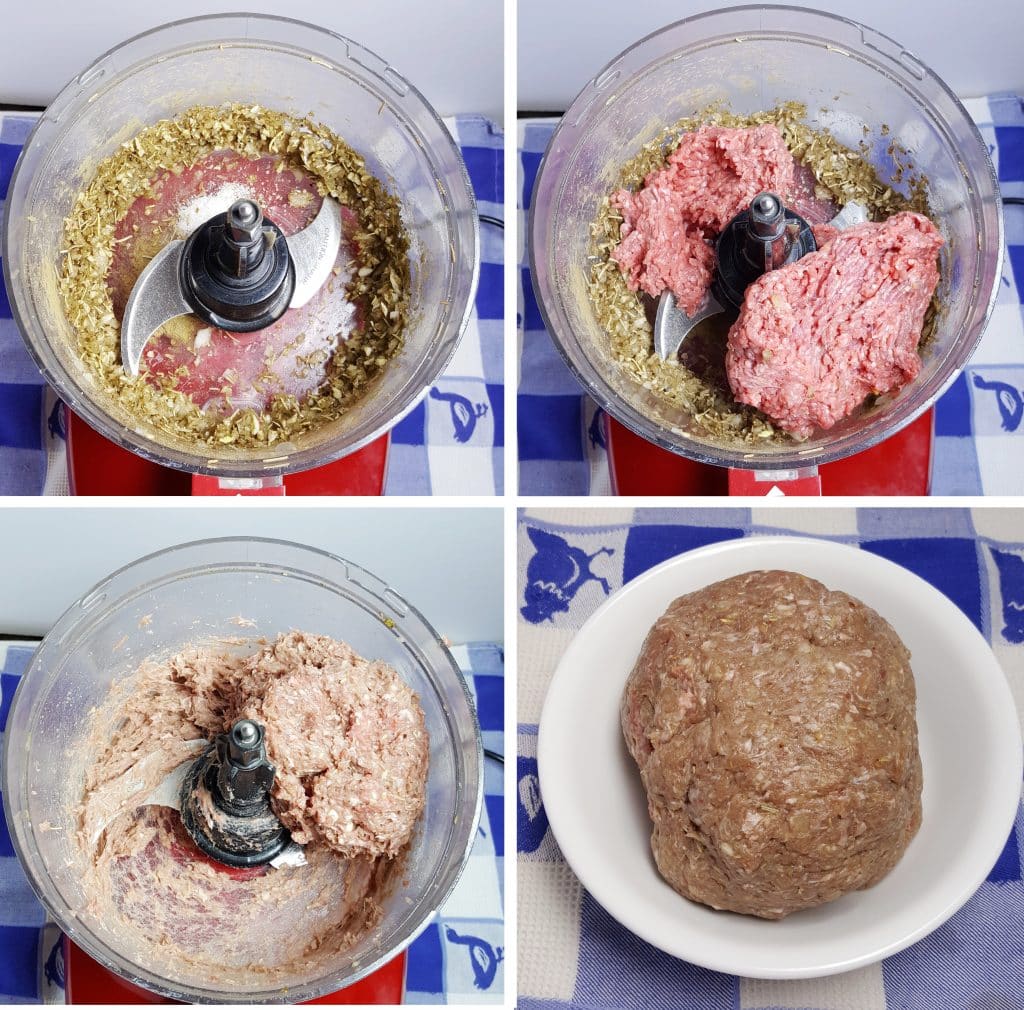 Add the Ground Lamb or Beef

In Alton Brown’s recipe, he processes the Lamb into a Pâté. It’s a great idea, as it will help to compress all ingredients to make a nice and solid, but juicy Loaf.

It will easily stay together on a spinning skewer, so that pieces can be shaved off with a knife. His recipe inspired me to use my Pressure Cooker for Gyros.

Therefore, add the Lamb and/or Beef to the Bowl of the Food Processor and process until smooth, like a Pâté.

Pack the Meat Mixture into a 6 inch Loaf Pan. Push down the Meat, to get it as tight and compact as possible.

Traditionally, Gyro Meat is cooked over an open flame. It can also be cooked in the oven. Both methods, use dry heat, which is not the environment of a Instant Pot, Ninja Foodi or Pressure Cooker.

So, I began thinking how I would keep the Gyro dry and compact and still end up with a Sliceable Loaf. 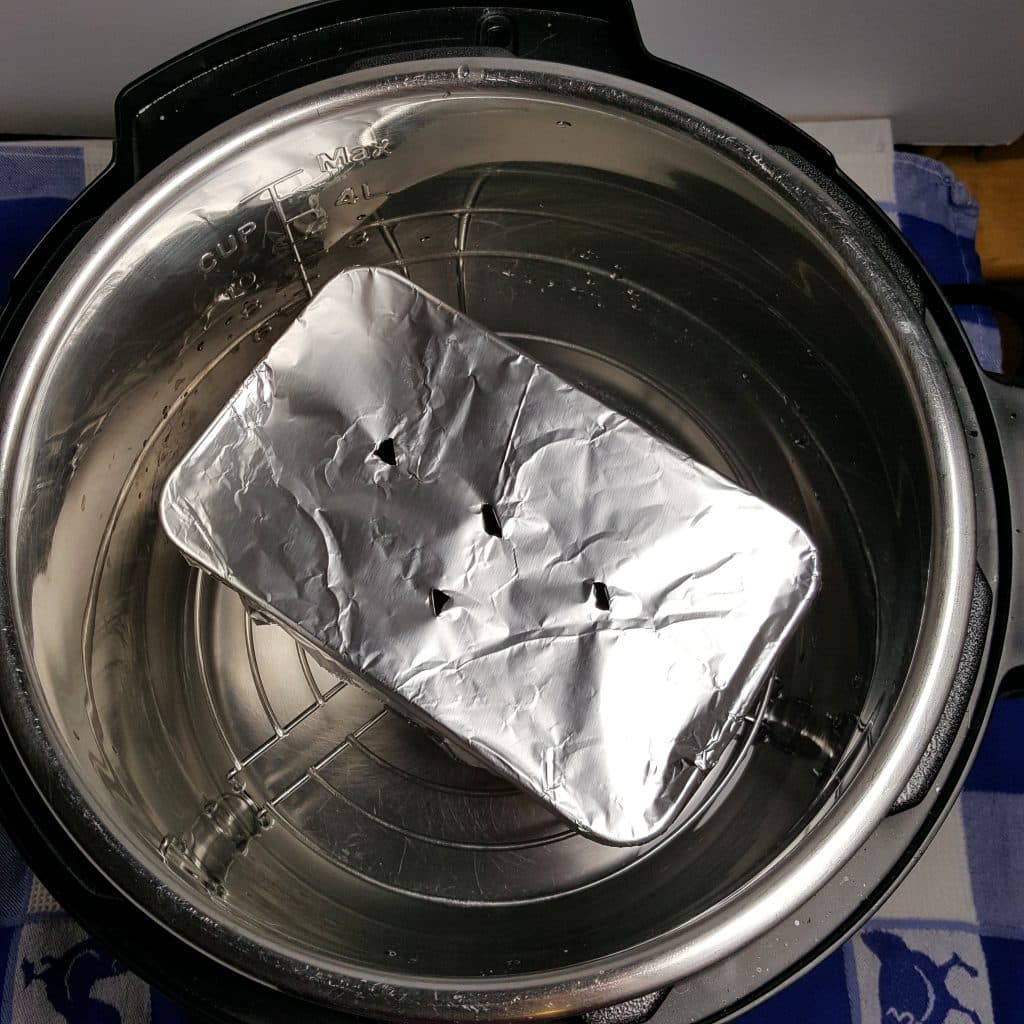 Alton, wraps his Meat in plastic and lets it sit in the fridge for a while, so that it will stay together and then compresses it with a brick.

That’s time consuming and more work than I wanted. So, it occurred to me to Cover the Loaf Pan tightly with Tin Foil, to slow down the cooking and allow the Gyro Meet to self baste, at the same time, keeping out condensation.

Poke some vent holes into the Foil, to allow steam to release.

Use a Short Legged Trivet inside the Pressure Cooker cooking pot over some water. Place the Loaf Pan on top of the Trivet.

The Gyro Meat will shrink down quite a bit and will become very compressed. 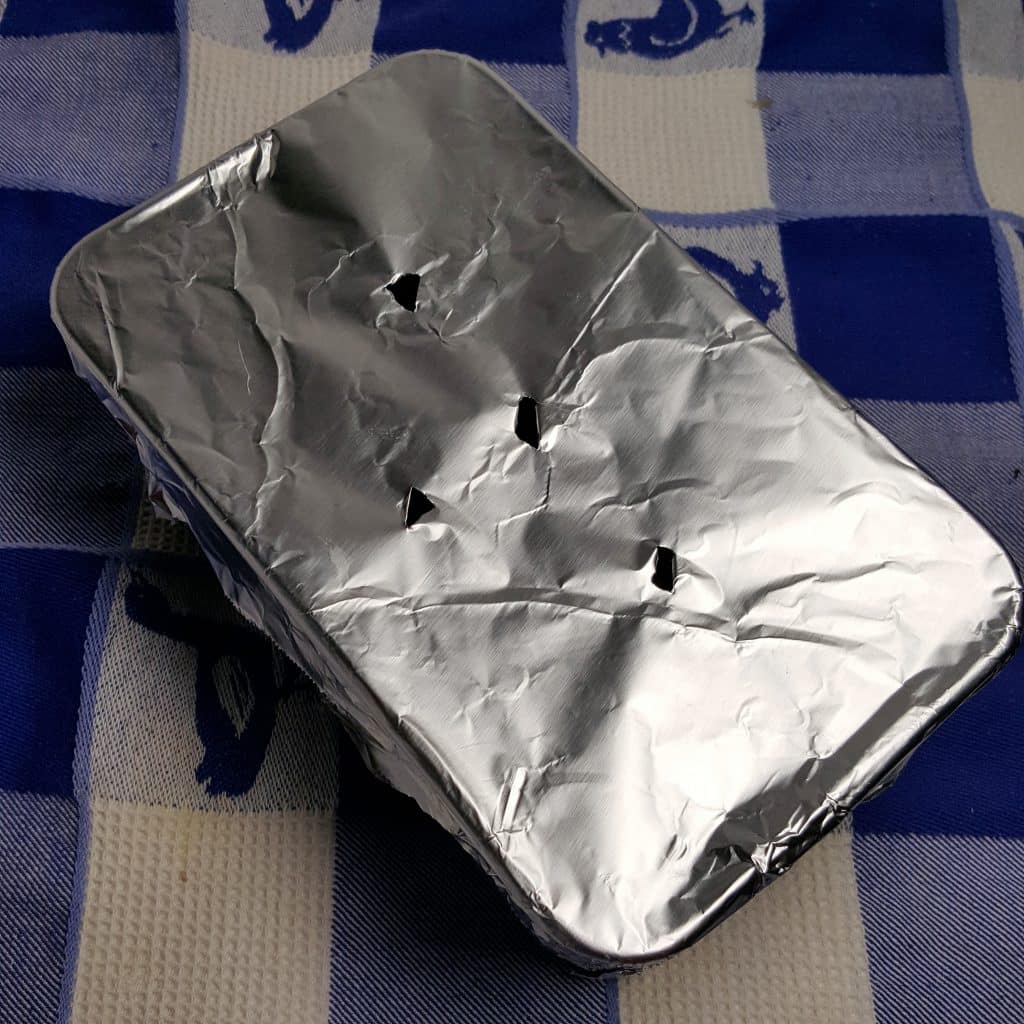 After all Pressure has been released from the Pressure Cooker, remove the Loaf Pan and allow the Gryo Meat to rest for 15 minutes. 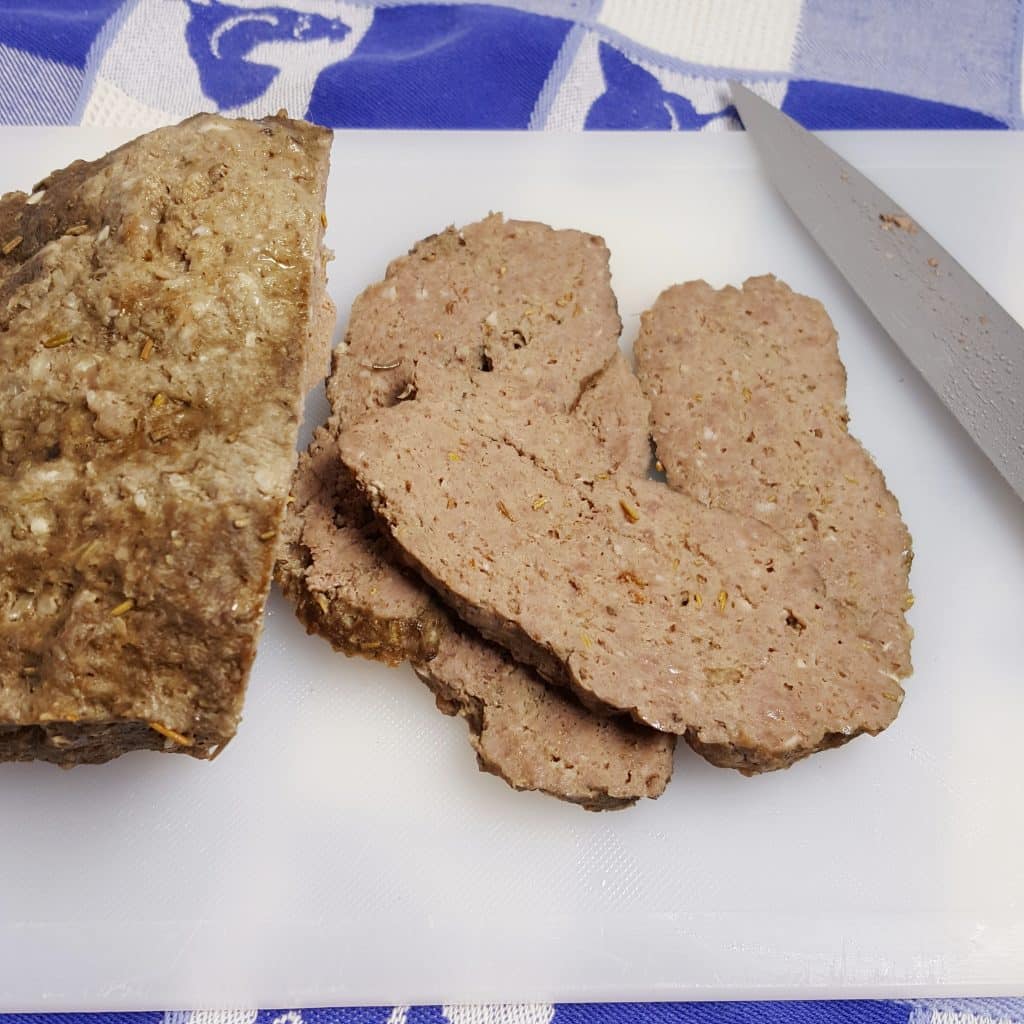 Use a Sharp Knife to Shave or Slice the Gyro Meat

The Juice will redistribute throughout the meat, keeping it moist, but firm. You can see how nice and tight the Gyro Meat is and how easily, you can shave off thin slices.

Use a very Sharp Knife and cut the Gyro Meat into thin slices. It looks like it came off a rotisserie and should be displayed in a window! Hehehe, well, close.

If you wanted to add a crispness to your Pressure Cooker Greek Lamb Beef Gyros, heat up a Cast Iron Skillet and give the slices a quick sear.

Serve your Instant Pot Greek Gyros in a soft Greek Pita on a bed of lettuce.

You will need some chopped tomatoes and of course, some of my yummy Homemade Tzatziki Sauce Recipe {Greek Garlic Cucumber Yogurt Dip}.

Top with Feta Cheese. My favorite is the Bulgarian Feta. 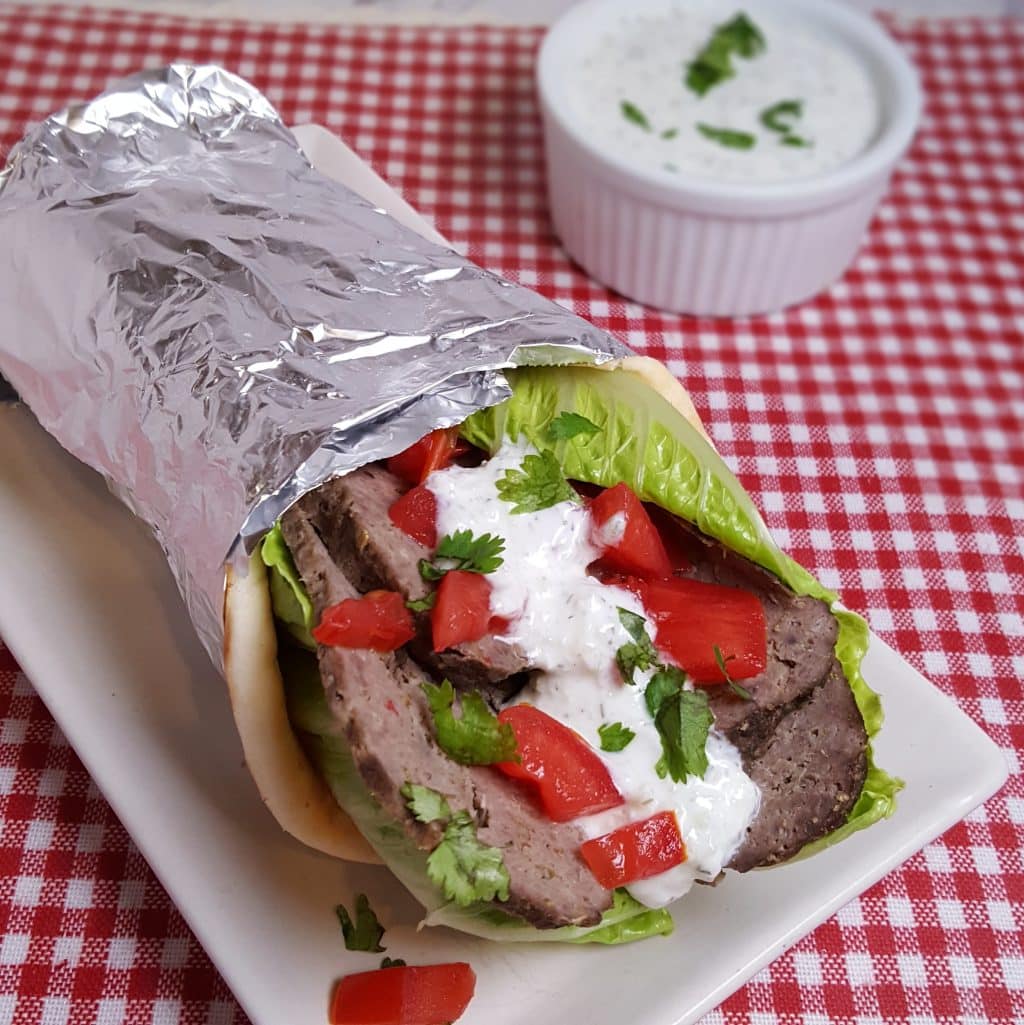 Wrap up your Gyro and you are all ready to eat. Serve it with a side of my Homemade Greek Tzatziki Sauce Recipe.

You probably already have some Homemade Greek Yogurt in your fridge, right?

Nutrition Facts
Pressure Cooker Greek Lamb Beef Gyros
Amount Per Serving
Calories 183 Calories from Fat 144
% Daily Value*
Fat 16g25%
Saturated Fat 4g25%
Cholesterol 20mg7%
Sodium 1754mg76%
Carbohydrates 9g3%
Fiber 1g4%
Sugar 4g4%
Protein 4g8%
Vitamin A 449IU9%
Vitamin C 1mg1%
Calcium 182mg18%
Iron 1mg6%
* Percent Daily Values are based on a 2000 calorie diet.
Tried this recipe?Mention @ThisOldGalCooks or tag #thisoldgalcooks!
© ThisOldGal.com - Sharing the recipe link to any of my recipes posts are both encouraged and appreciated. Unauthorized and improperly attributed or non-attributed use of this material, including screen shots, copy/paste of full recipes to any social media site, website, mobile application or service (e.g., copymethat, recipe keeper, pepper) or cookbook, without the requisite attribution or otherwise with express written permission from Jill Selkowitz is strictly prohibited. You may share a photo with a link back instead.