END_OF_DOCUMENT_TOKEN_TO_BE_REPLACED

Make sure you have first read Page One of this Article, before continuing. There are very important and helpful tips (and things to avoid doing) on the first page, which will ensure that your first yogurt attempt is a huge and great success!

END_OF_DOCUMENT_TOKEN_TO_BE_REPLACED 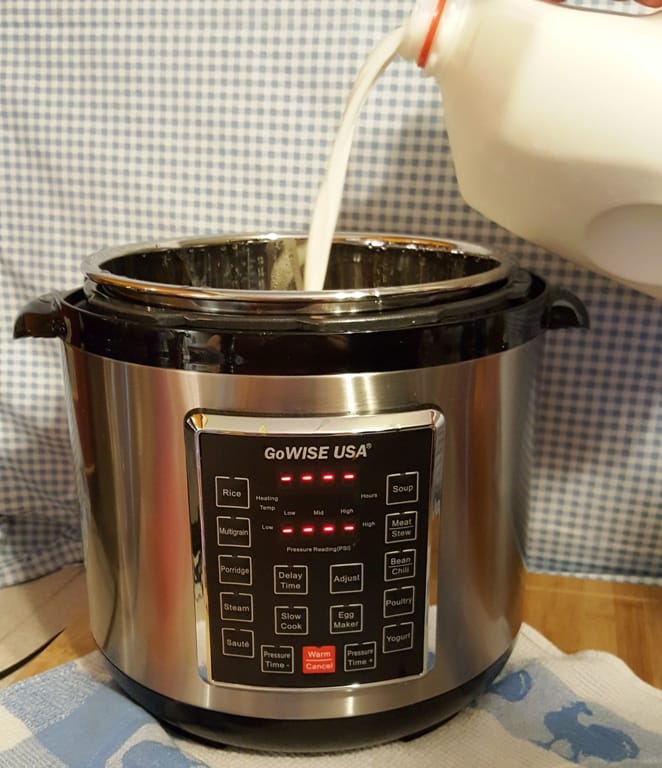 We switch off between 2% and whole milk, but much prefer the whole milk, as it produces a super creamy and thick yogurt. Plus, it’s been said that whole milk is actually better for the body than the fat free or low fat.

Not only do I eat yogurt for breakfast, but I love it as a dessert and I top it with Agave, fresh fruit, nuts, berries, granola, whatever sounds good. 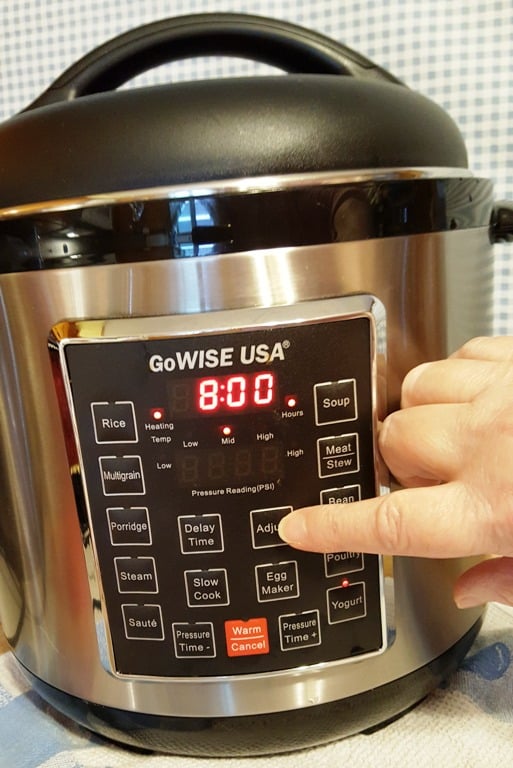 Press the Yogurt button on your  GoWise Pressure Cooker and then the “Adjust” button until the display says “boil.”

By the way, you are all invited to join my This Old Gal Pressure Cooking Facebook Group! 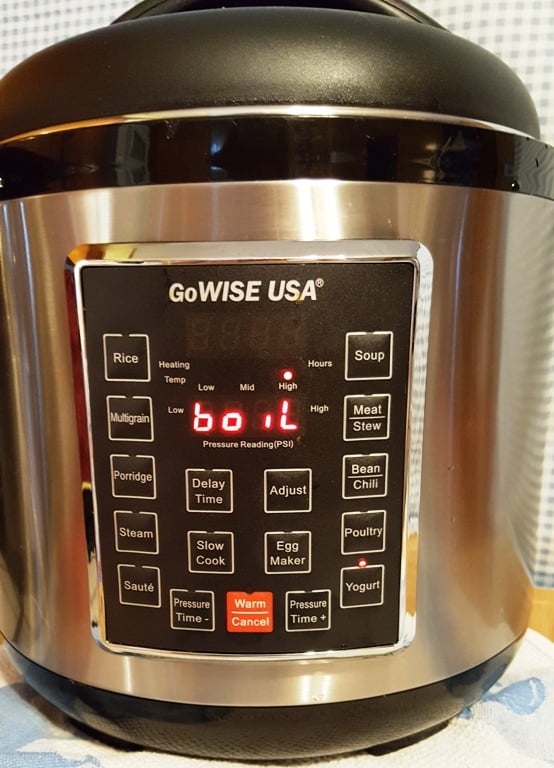 The display will show “boil” and “High.” If you stir your milk during the boil cycle, you have a better chance of getting up to 180 degrees. Your yogurt is not under pressure, so it is fine to remove the lid. If you prefer to use a Glass Lid, that is fine too. 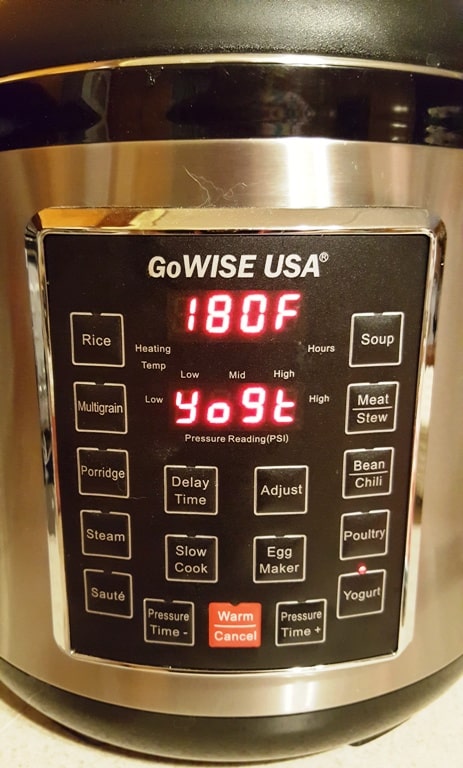 When the boiling cycle is done, a beep will sound and the GoWise Pressure Cooker display screen will say “Yogt” and “180F.” Just a second folks. Make sure you read this next section carefully.

I’ve been seeing more and more that people are ending up with thin Yogurt and I think I have figured out the problem.

First make sure that you allowed your GoWise Pressure Cooker to cool down after sanitizing.

The GoWise Pressure Cooker is ‘supposed’ to scald the milk to a temperature of 180 degrees. When the GoWise beeped that it was finished with the boil cycle, it showed 180 degrees on the display panel.

However, after using a Digital Thermometer, the temperature of the milk was below 160 degrees. If this happens to you, here is the easy fix. 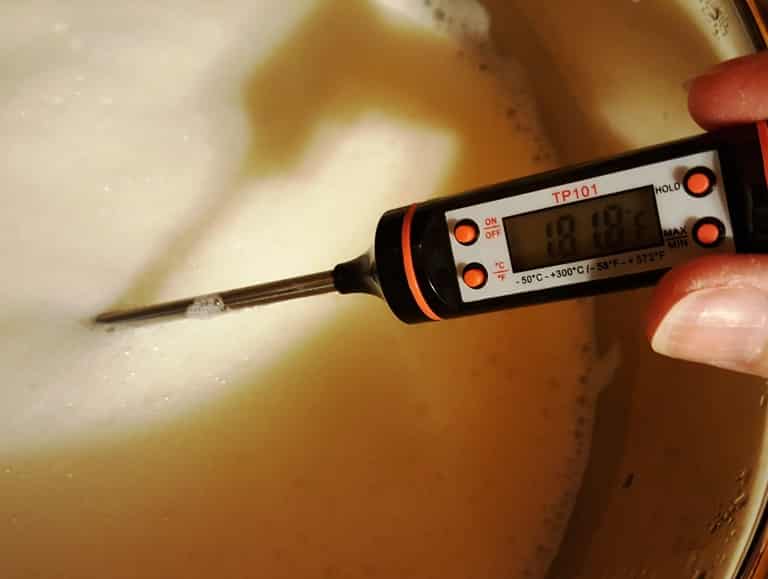 There will be hot spots and the stirring prior to taking the temperature, will give a more accurate reading. Make sure you have a good Digital Thermometer and test the milk after each boil. (I like to get to 182-185 degrees.)

If you cannot get to 180 degrees after your first boil attempt, use the Sauté function on Low and Whisk continuously until you reach 180 degrees or above. I like to hold the temperature at 183-185 for 5 minutes. I find I get a larger yield of yogurt and less whey, doing so.

It is important to whisk around the milk while you are Sautéing, as the bottom will get hotter quicker and you want an accurate reading and you don’t want the bottom of the pot to burn. If you started with a hot pot, rather than waiting for your GoWise Pressure Cooker to cool down, you probably will have a skin or scorching on the bottom. 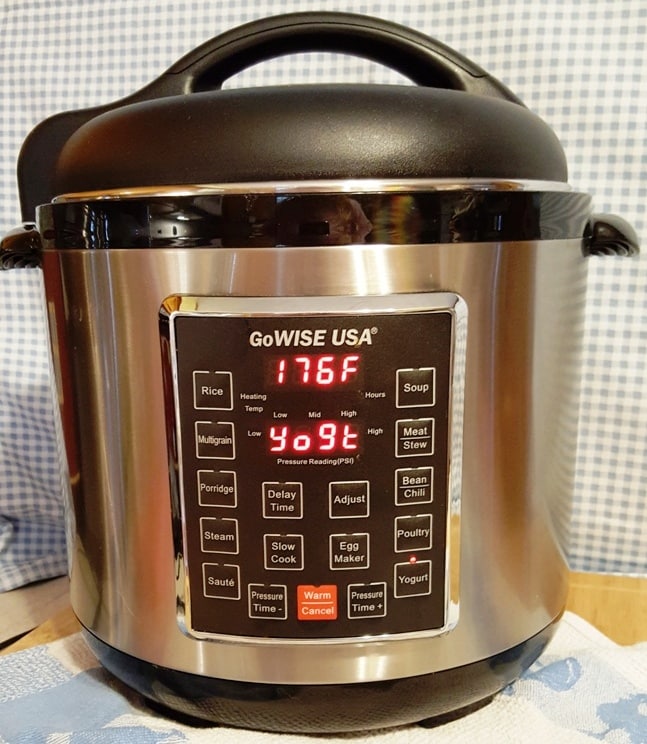 Had I left the inner pot inside the GoWise Pressure Cooker, it would have started to count down after showing 180 degrees.

Since I had to use the Sauté function and the “countdown” was no longer a possibility for this GoWISE USA Greek Yogurt Recipe.

Whisk Milk for a Quicker Cool Down

Remove the Cooking Pot from the GoWise Pressure Cooker and allow the milk to cool down to 110 degrees. Remember to always stir the milk prior to taking the temperature.

During the cool down, use a whisk to aerate the milk, so that it cools down quicker and more evenly, as the bottom of the pot will remain hot for a bit.

I seem to also get better results when I let the milk cool down without the use of an ice water bath. A cool water bath is fine, as is just letting the cooking pot sit on a cooling rack. 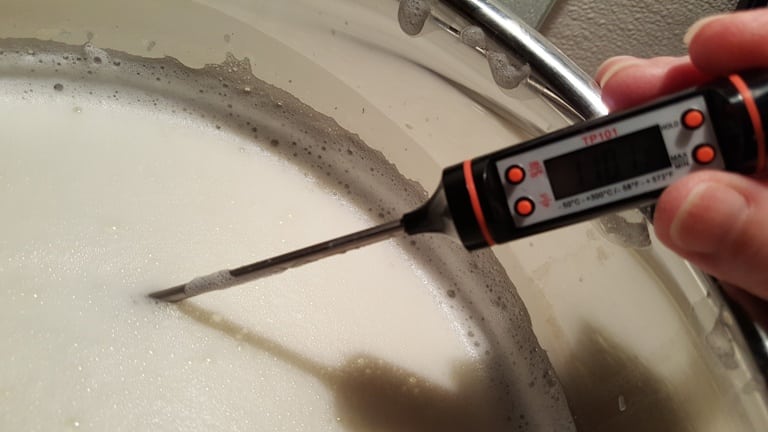 When the temperature reaches 110 degrees, you are ready to add your yogurt starter. To purchase a good and reliable Digital Thermometer, please click here. 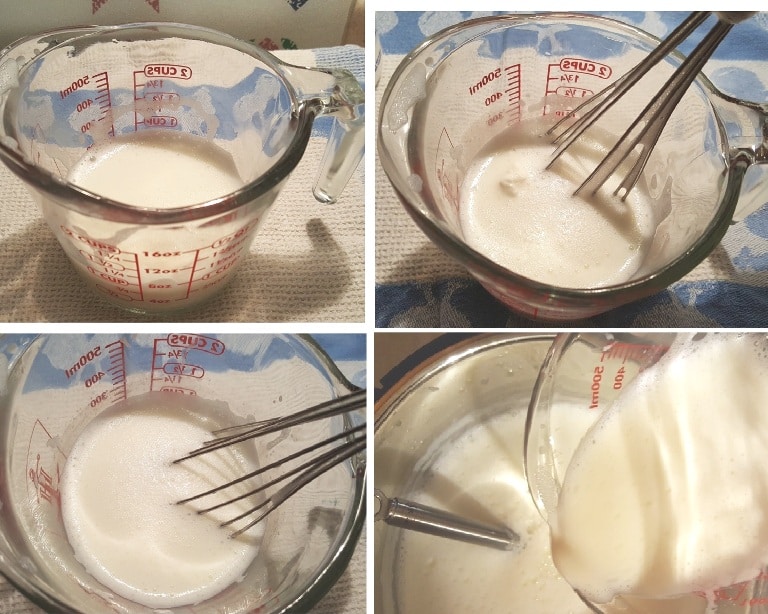 The yogurt that you use as the “starter,” needs to contain live cultures and milk; nothing more.

I like to temper the starter, rather than just dumping it into the pot. So, I remove about a cup of the milk and add the starter and then whisk it in really well, then I pour the milk back into the GoWise Pressure Cooker cooking pot and whisk it up well.

I prefer using a lesser amount of starter, for a longer period of time. It yields a much thicker and creamier yogurt, without being overly sour.

If you want to add a sugar and/or vanilla, now is the time to do so. 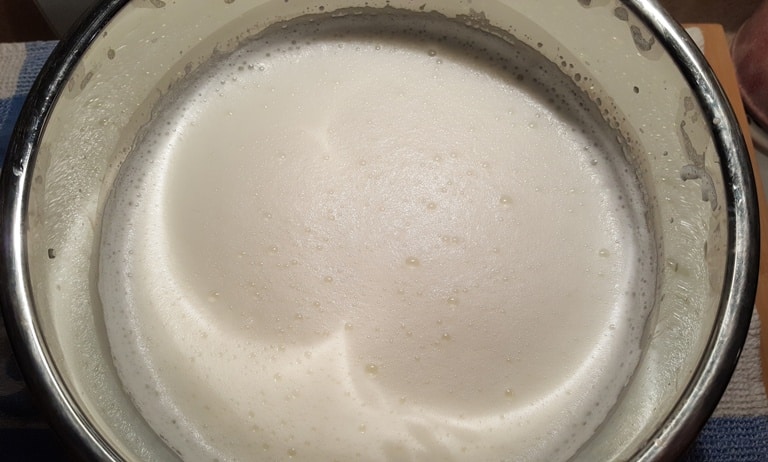 Cooled Down Milk with Starter

The milk will look bubbly, which is fine. Place the cooking pot back into the GoWise Pressure Cooker. 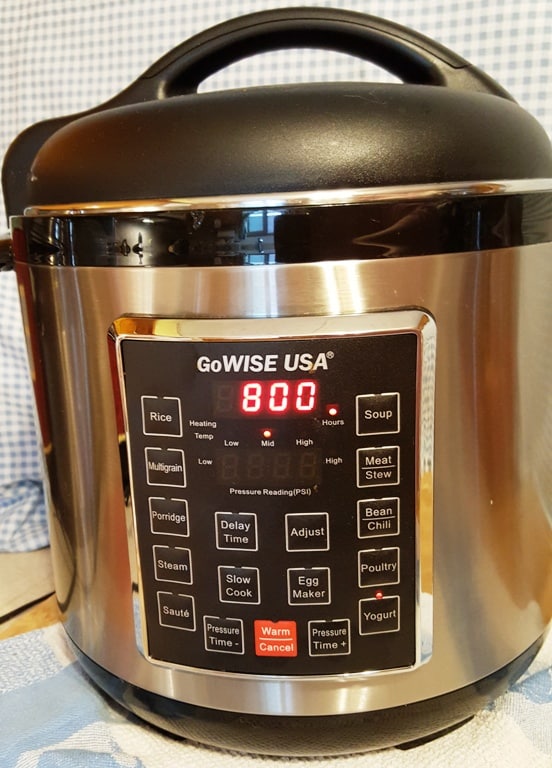 Push the Yogurt button and the GoWise Pressure Cooker display will say 8:00. Adjust the time up to 10:00. Since we are using just 2 Tablespoons of starter, it needs more time to incubate.

I prefer using a lesser amount of starter, for a longer period of time.  It yields a much thicker and creamier yogurt, without being overly sour.

The GoWise Pressure Cooker resets from the “Normal” function to the “Less” function!!!!! You don’t want to incubate on the “Less” option. That option is used by many people who make bread and want a warm environment for their bread to rest and rise.

After you set your time, the GoWise Pressure Cooker will start to count up. Since I do 10 hours (many other people use 8 hours), I try to time my yogurt making to have the incubation happen while I sleep. 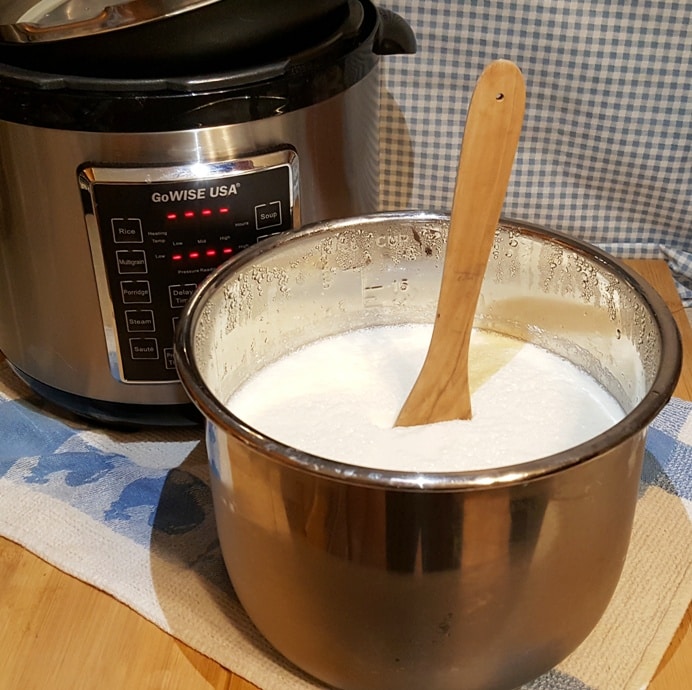 The next morning, when the GoWise Pressure Cooker Beeps, carefully remove the cooking pot.

Don’t feel tempted to stir the yogurt. It needs time to set up. 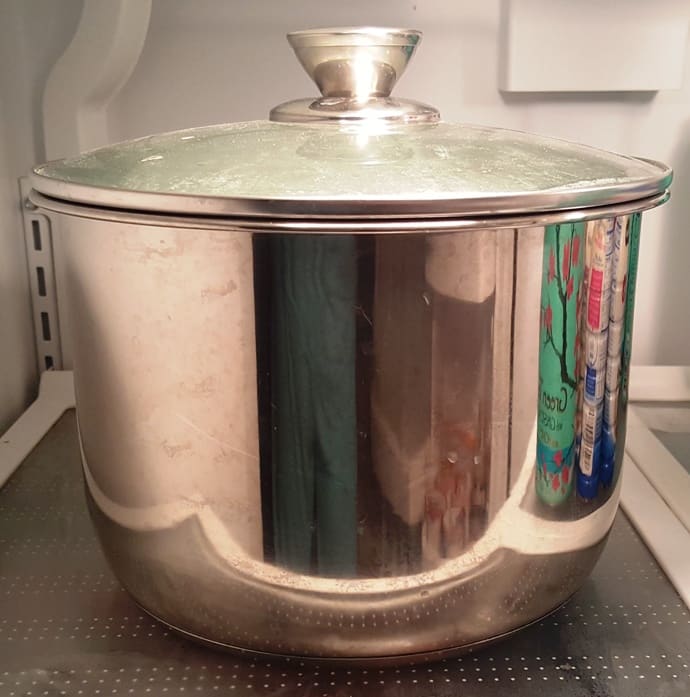 Cover Yogurt and Place into the Refrigerator

Do not stir the yogurt.

Place a cover on your Cooking Pot and place in the refrigerator for at least 8 hours.

Since I start my yogurt in the evening at around 9:00 – 10:00 and I incubate overnight while I am sleeping, my yogurt will go into the refrigerator the next morning and stay there all day long.

For those of you who start your yogurt in the morning and then incubate all day, you would place your pot of yogurt in the refrigerator after incubation, which would be overnight, to chill.

Don’t feel tempted to stir the yogurt. It needs several hours to set up properly. I usually leave it alone until the next morning. 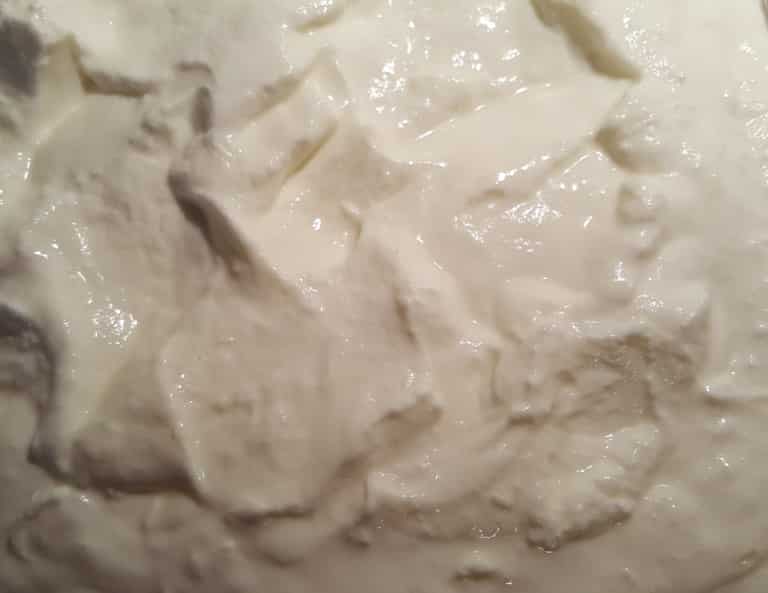 You can eat it a is, as it is now Yogurt, or you can strain out the whey and have Greek Yogurt. You can see how thick it is already. 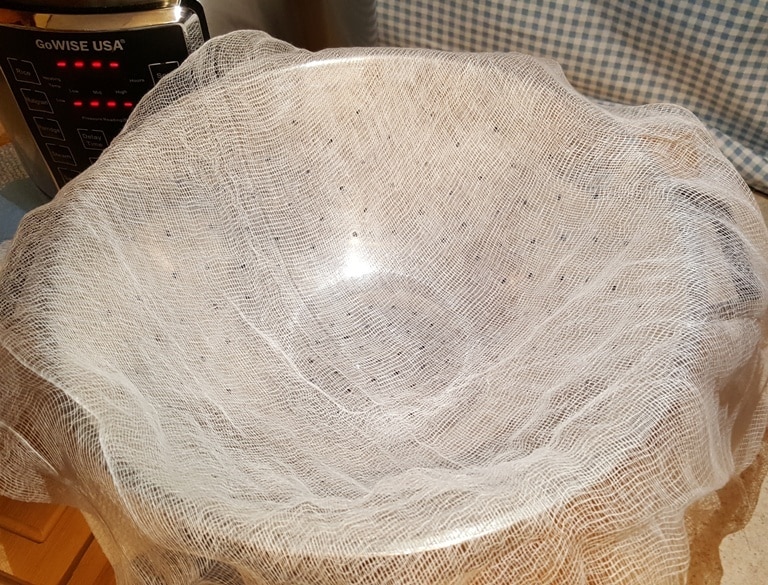 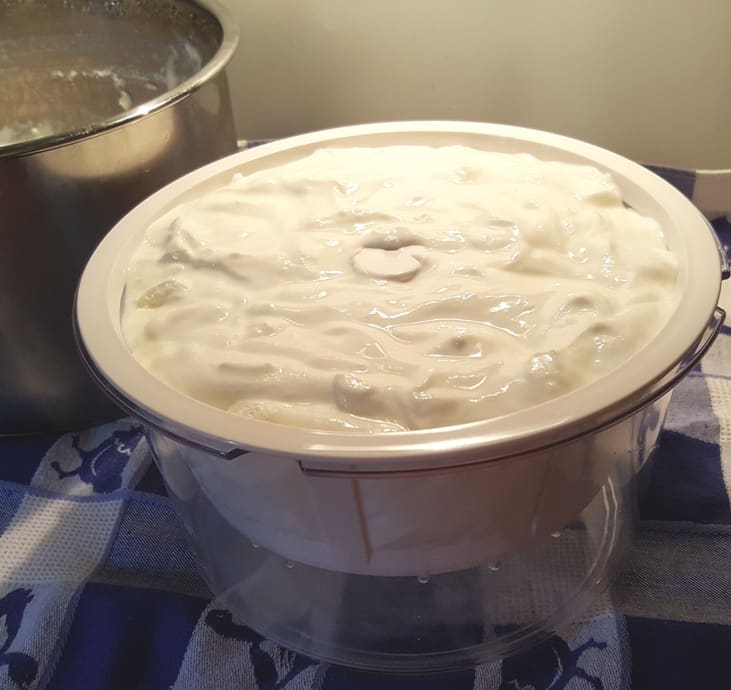 Pour the yogurt into the Euro Cuisine Greek Yogurt Maker or homemade strainer and put back in the refrigerator for at least a couple of hours for Greek Yogurt. The longer it strains, the more whey is removed and the thicker it becomes.

If you prefer a less thick yogurt, just don’t strain as long. Play around with how you like the consistency and make that your go-to method.

My preference is to use my Euro Cuisine Greek Yogurt Maker, but I wanted you to be able to make the yogurt right away.

What constitutes Greek Yogurt is just using milk and the starter (no powdered milk is used) and then STRAINING the Yogurt to remove whey. 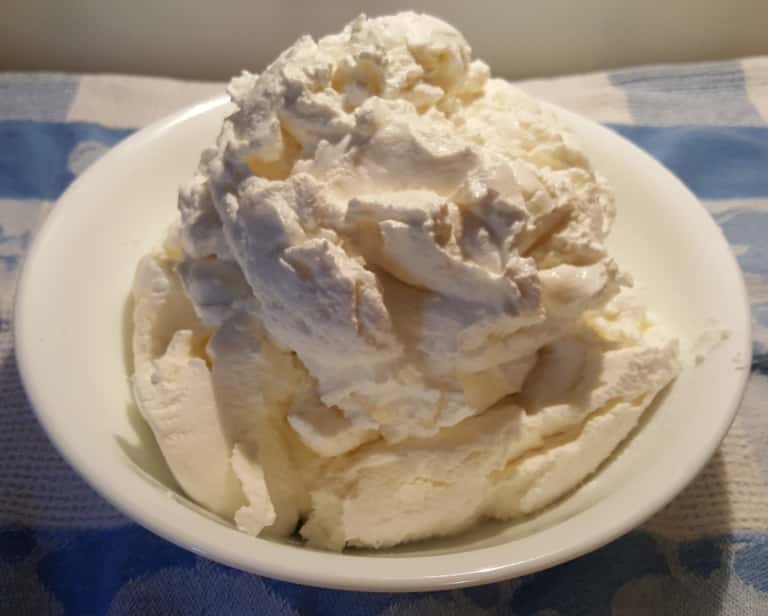 All you need is two to three hours is fine to achieve a nice, thick Greek Yogurt. I love very thick yogurt, so I usually strain mine for about 4-6 hours and I get 15-16  servings. 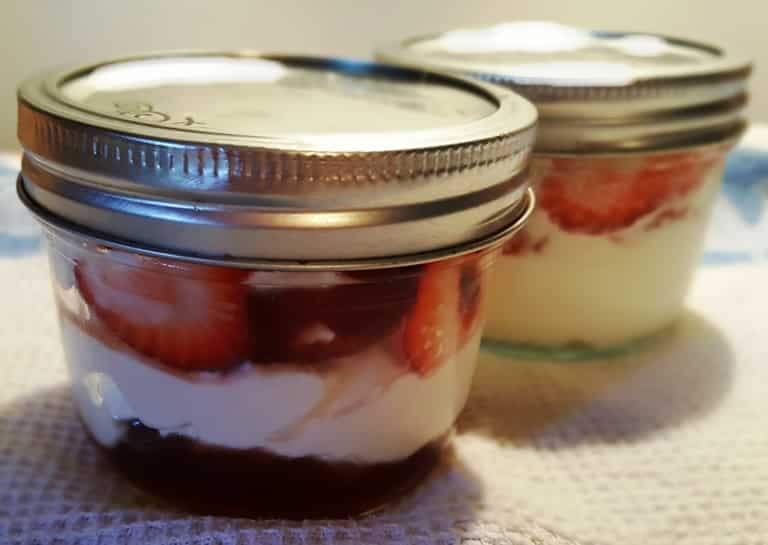 More often than not, I fill my Kerr Half Pint (8 oz) Mason Jars with the Fresh Berry Compote and then add the strained cold yogurt and store in my refrigerator. Makes an easy grab and go breakfast.

For the bulk of the yogurt, I store it in larger containers, so I can take out a dollop and use it on top of my Pressure Cooker Competiton Chili Con Carne, Pressure Cooker Chicken Enchiladas and anywhere else where sour cream is used.

Doesn’t that look yummy? That’s my Orange Ginger Pecan Granola, which is so easy to make and very delicious. The one in the back is for the hubs, just strawberry, remember?

What will you have on your GoWISE USA Greek Yogurt Recipe?

Make Yogurt (Not Under Pressure)

Whisking the milk every 10 minutes during the boil cycle will help the milk come up to temperature quicker.
Getting milk to 183-185 degrees and holding there for a few minutes, will yield a thicker yogurt.
Boil Cycle will take about 45 minutes.
Cool Down will take about 10 minutes. Greek Yogurt is simply yogurt made from milk and a live culture starter and then strained for at least two hours. Don't forget to save some of the strained yogurt in ice cube trays to use as your future starter. Whole Milk works best and give the most creamy and thick consistency.
Tried this recipe?Mention @ThisOldGalCooks or tag #thisoldgalcooks!
© ThisOldGal.com - Sharing the recipe link to any of my recipes posts are both encouraged and appreciated. Unauthorized and improperly attributed or non-attributed use of this material, including screen shots, copy/paste of full recipes to any social media site, website, mobile application or service (e.g., copymethat, recipe keeper, pepper) or cookbook, without the requisite attribution or otherwise with express written permission from Jill Selkowitz is strictly prohibited. You may share a photo with a link back instead. 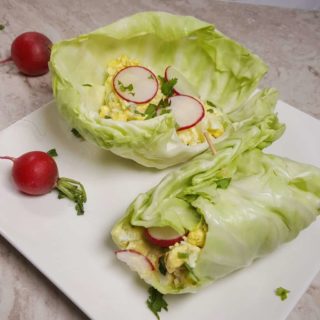