Jump to Recipe Go to Video

Instant Pot Colcannon is a traditional Irish mashed potato and kale side dish, typically eaten on St. Paddy’s day but enjoyed all year round. 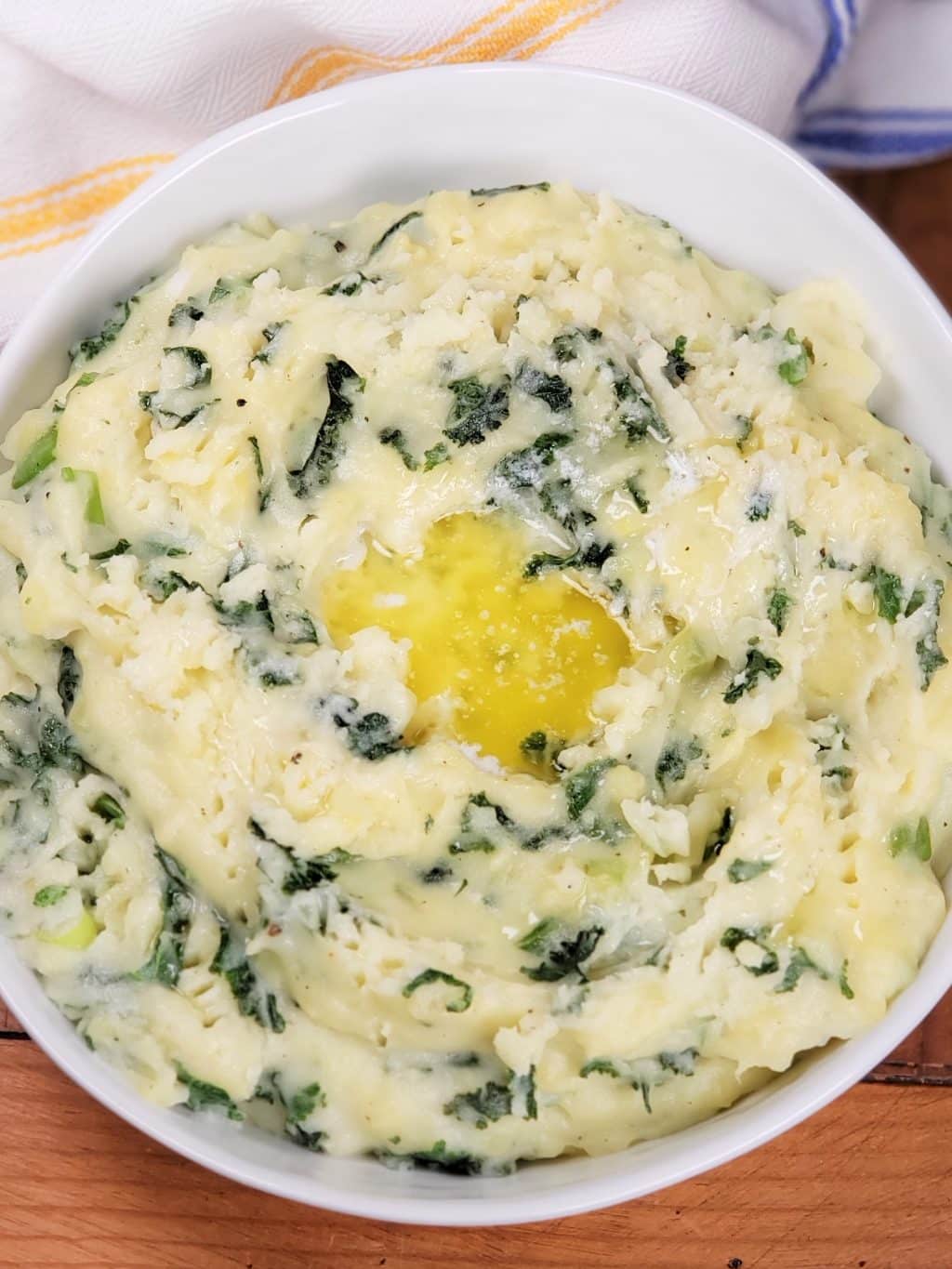 Colcannon is typically eaten on St. Paddy’s day but enjoyed all year round.

Typically, Irish Colcannon is made on the stove by first boiling the potatoes in one pot and then sautéing the greens in a second pot and then mashing them in a mixing bowl. I am going to teach you to make Instant Pot Colcannon using only one pot!

One of the really cool things about using an Instant Pot or Ninja Foodi is that there are more than one use for just this one appliance. Yes, even a stand alone Pressure Cooker can sauté, steam, make eggs, cake, boil and make rice.

Similar to my Instant Pot Mashed Potatoes, recipe, my one pot Instant Pot Colcannon recipes starts out using the steaming method for the potatoes. 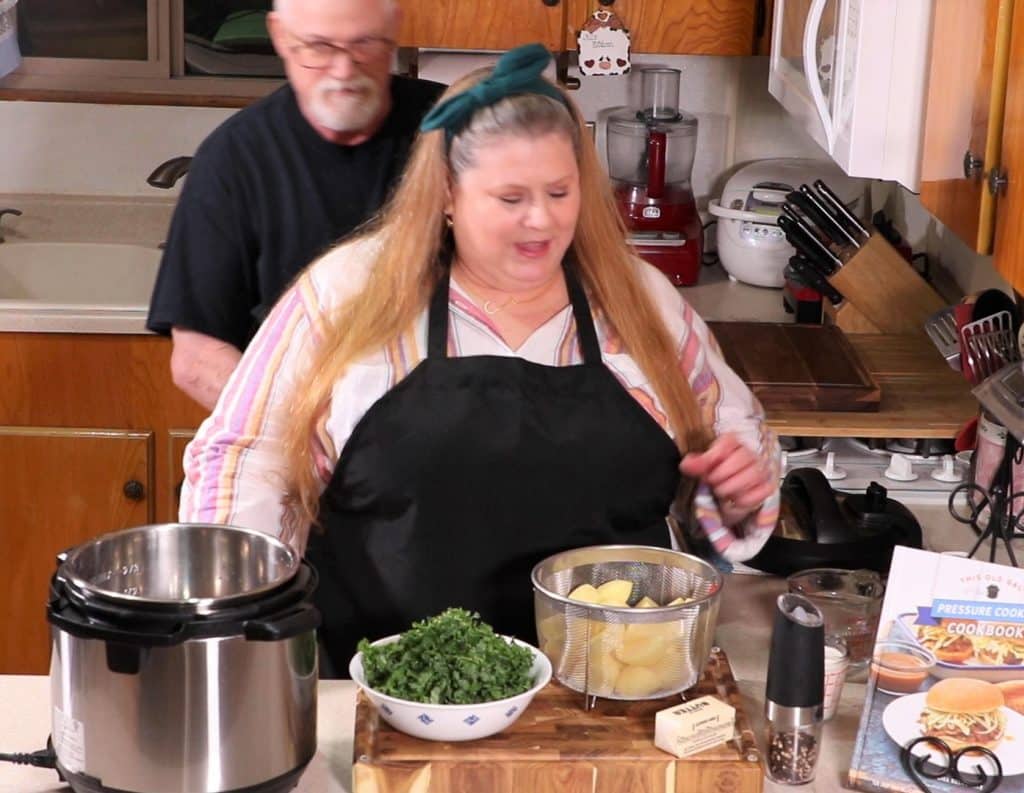 The ingredients are few, but Instant Pot Colcannon packs a big punch. If you are not a kale lover (it’s really good here though), there are good substitutes, which I talk about below.

Instant Pot Colcannon is an awesome side dish to make for St. Patrick’s day and goes especially well with my Instant Pot Corned Beef and Cabbage!

Pro Tip: When potatoes are first soaked in water for about 30 minutes, much of the starch is removed and this allows for a fluffier and nicer tasting potato. I do this in most of my recipes where potatoes are used.

For instance, my Pressure Cooker Japanese Beef Curry Stew {Instant Pot}, which is one of my favorite recipes, also talks about soaking the potatoes. It does make a difference. The potatoes are peeled and cut and then added to my Salbree Steamer Basket (which I recommend). I then place the steamer basket into a large mixing bowl. When I am ready to use the potatoes, it’s easy to just grab the handle and pull the potatoes from the soaking water. 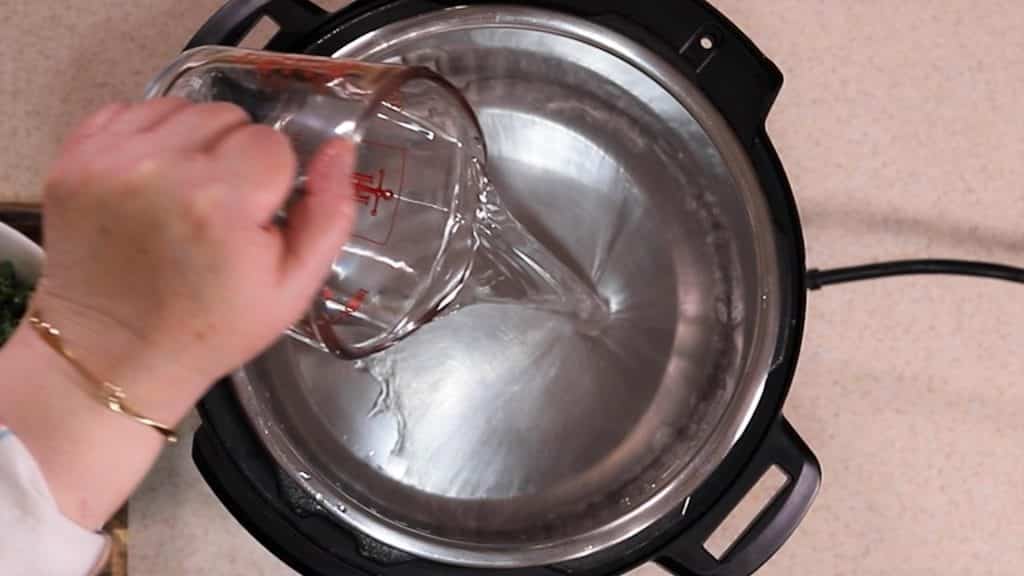 Water is added to the cooking pot with a glass (liquid) measuring cup, so that the potatoes can steam above.

The potatoes sit above the water and won’t become waterlogged and mealy.

Add Basket of Cut and Peeled Potatoes to Pot

It is also very easy to just remove the basket of chopped potatoes right from the Instant Pot, Ninja Foodi or Ninja Foodi. So, basically, get a steamer basket like you see above for yourself! It comes in handy and I use mine all the time. 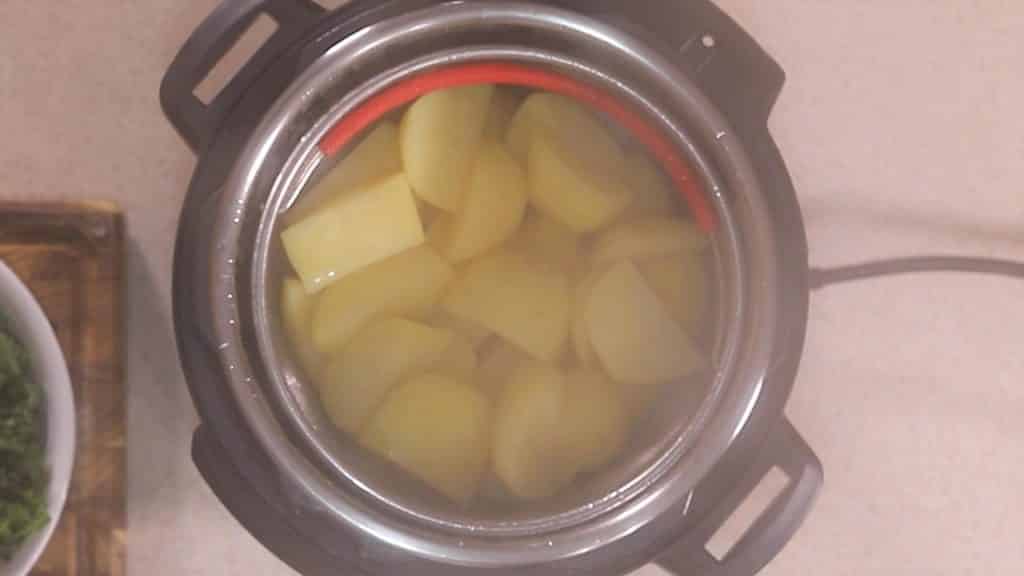 Pull Out the Basket of Potatoes

Pro Tip: Russet and Yukon Gold potatoes are best for Instant Pot Colcannon, as they mash nicely and absorb the butter and milk really well, while becoming very creamy. However, red potatoes can be used as well.

Other greens such as mustard greens and turnip greens can be used in place of kale. We will use butter for this recipe, although back then, butter was expensive and not used as much. Traditionally, I believe the recipe was very simple due to it being “peasant” food and using leftovers.

For this Instant Pot Colcannon recipe, we are going to use just the the pressure cooker feature to first make potatoes and then we will mash them with the kale, which is sautéed right in the same pot. 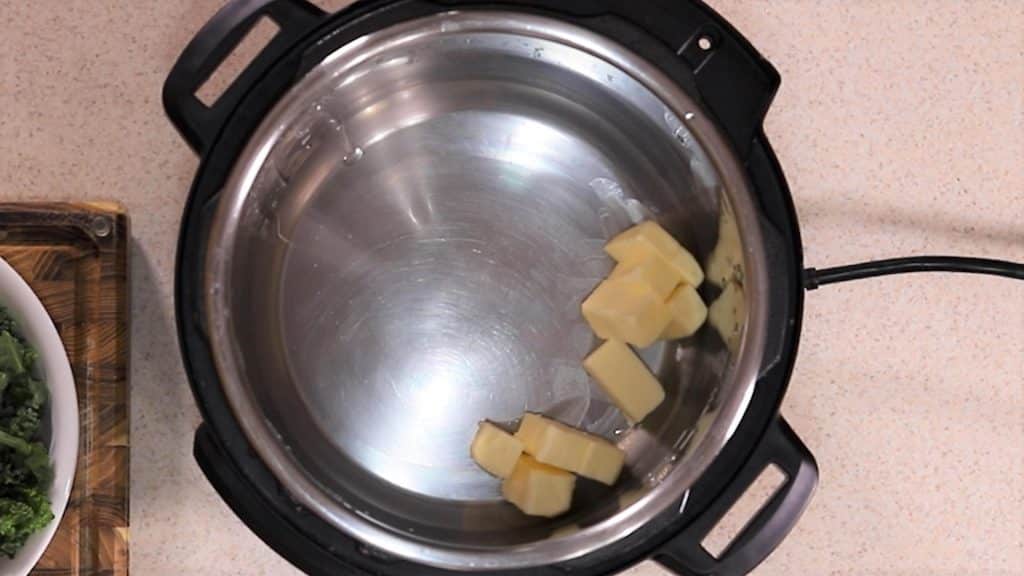 Butter is Used to Sauté the Kale

While the potatoes are draining the Kale will quickly sauté in some butter.

How to Sauté the Kale for Instant Pot Colcannon

Some people like to use bacon grease for sautéing the kale. 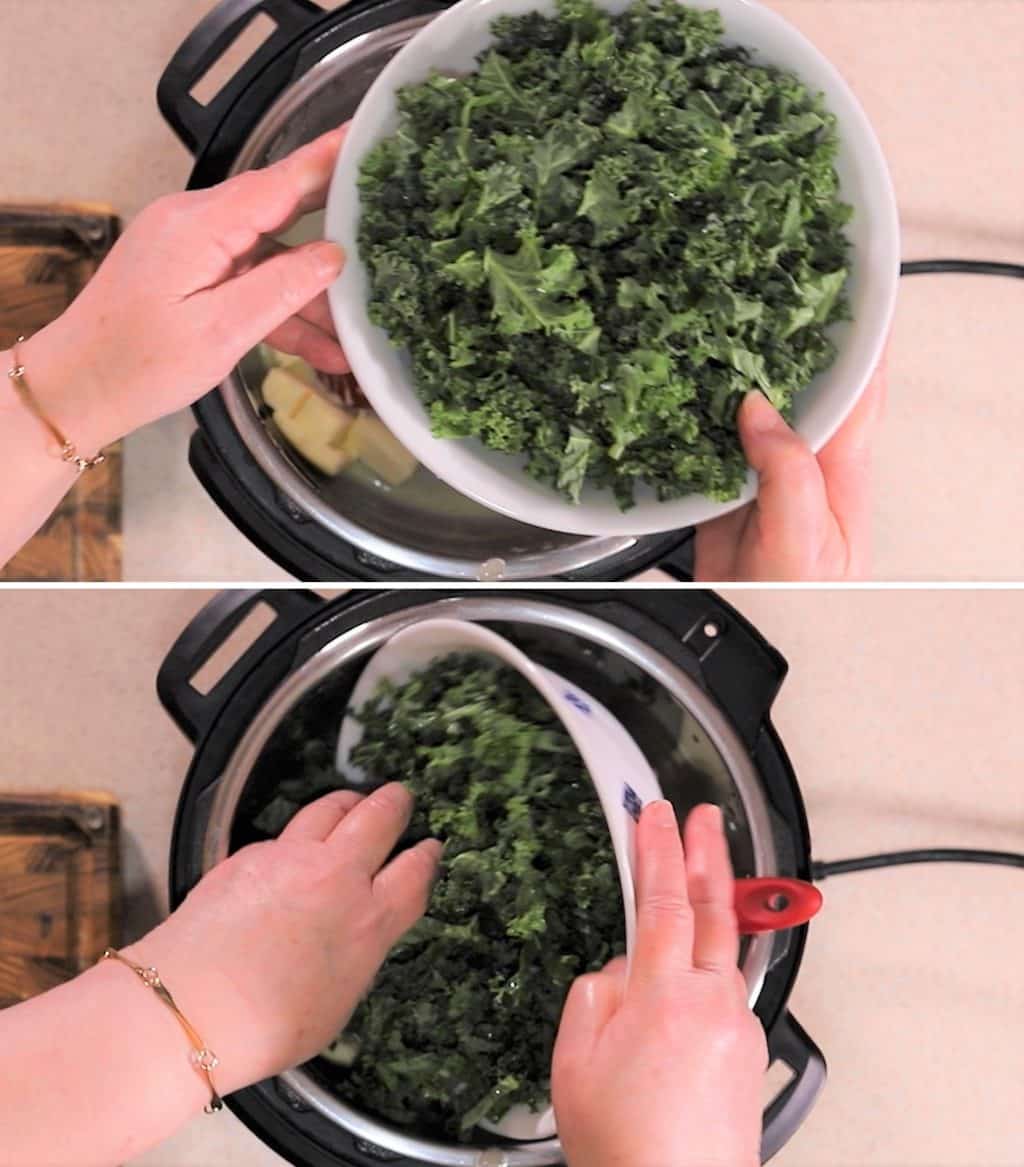 From what I understand, kale is used most often in Ireland. They love the curly kale. Remember, it shrinks up so much, so make sure you buy enough curly kale.

Can Colcannon be Frozen?

It is so wonderful, to make colcannon in just one pot. This is one of the things I love so much about my  Instant Pot, Ninja Foodi or Pressure Cooker. I don’t have to turn on my stove and heat up a skillet. 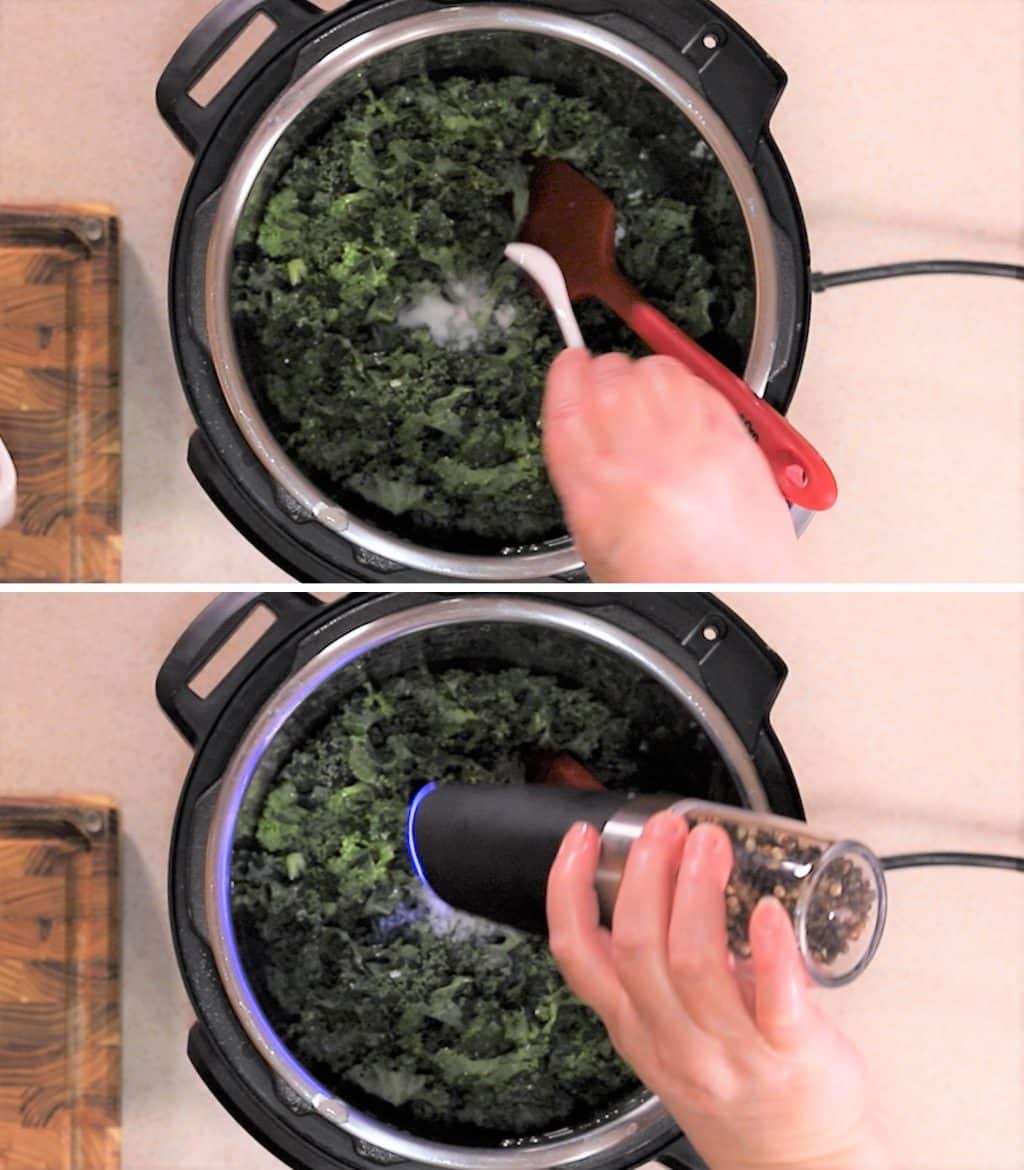 Add Salt and Pepper to Taste

Pro Tip: My recipes usually start with a bit less salt and pepper in order to give you room to add more. You cannot undo the amount, but you can always add more.

So many people ask about my pepper grinder, so click her to buy one for yourself: Gravity Electric Salt and Pepper Grinder. It is so wonderful to have the grinder do all the work!

For kale lovers, try my  Instant Pot Olive Garden Zuppa Toscana Italian Soup. I took their recipe and made it better. 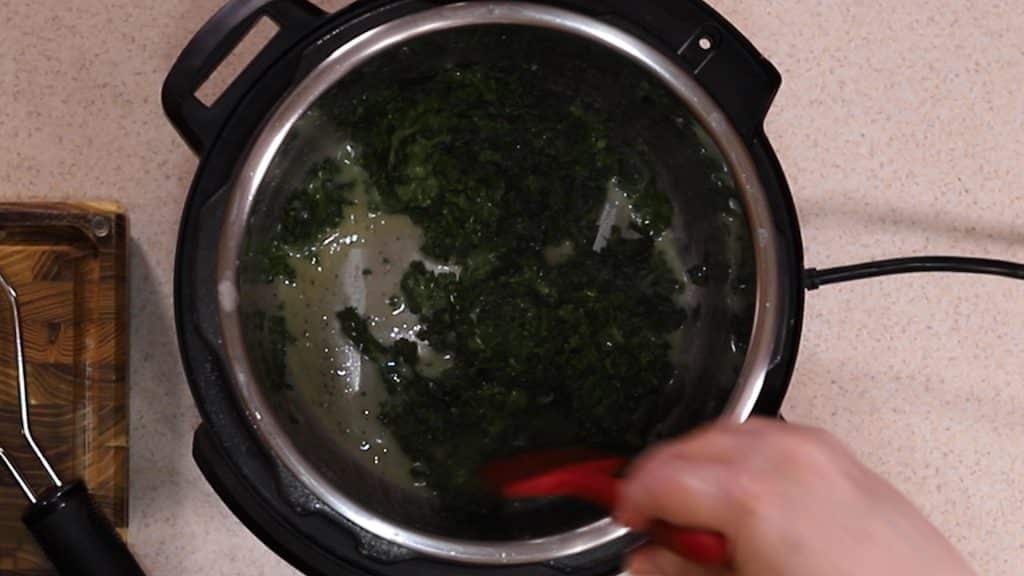 Quickly, the kale is now a fraction of its raw self. Remember the photo from above?

The amount I add to Instant Pot Colcannon varies. If I have more kale, I add more, or if I want to stretch the recipe, I also add more.

How to Reheat Colcannon

If you have used a Vacuum Sealer Bags, you would first cut open the bag and add it to the bowl. 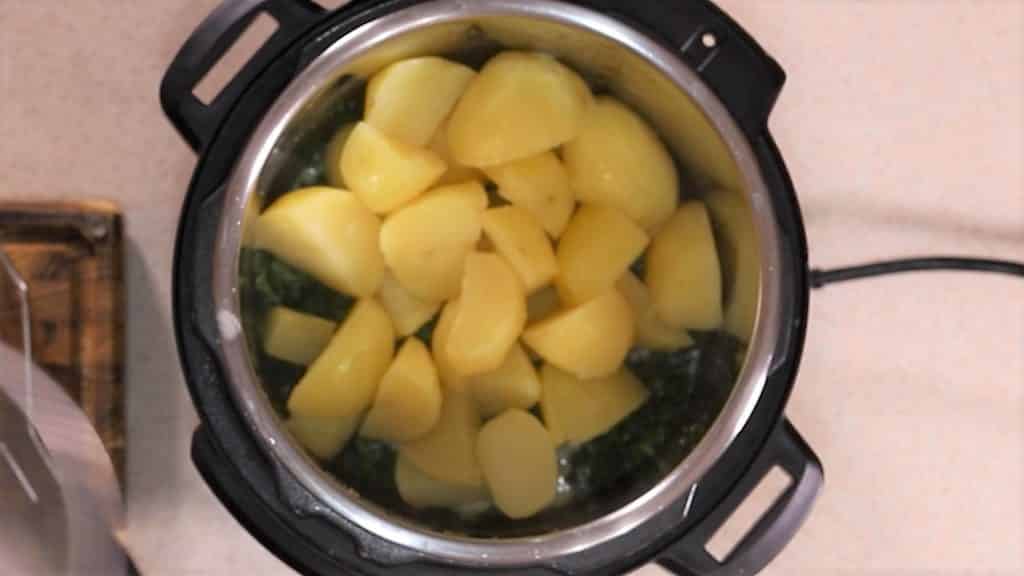 There are so many colcannon recipes around, as every family will customize the recipe.

I like to mix in scallions towards the end of mashing to give the Instant Pot Colcannon some texture and a bit of an onion flavor. 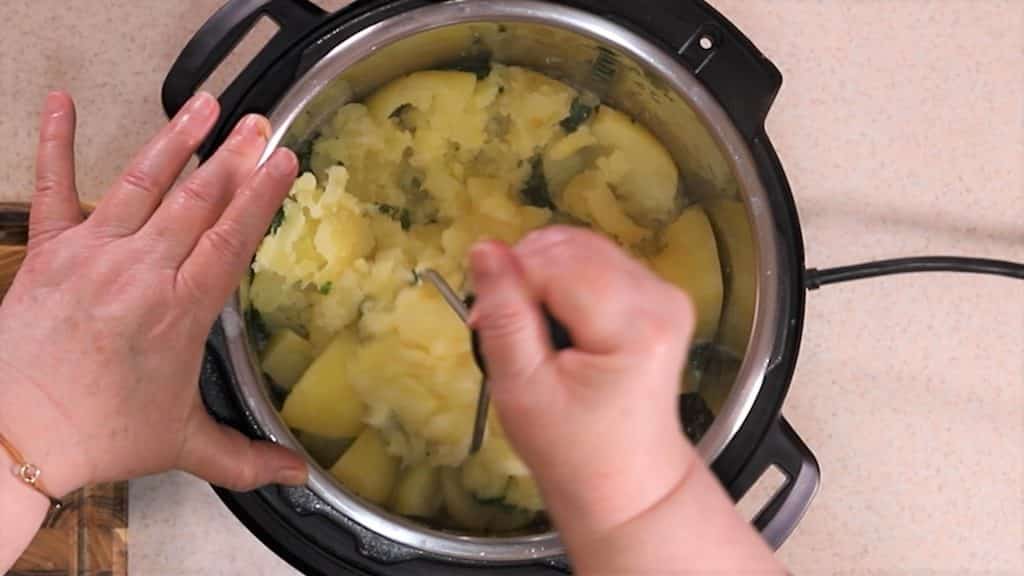 This Potato Masher makes mashing very easy and it is all done in just the one appliance and no bowl is needed.

The height of the cooking pot in the pressure cooker is great. It prevents you from making a mess, which is always a plus. However, if you have a sous chef like Ed, well, the mess would be gone in less than a second. If you follow my videos, you know what I mean. 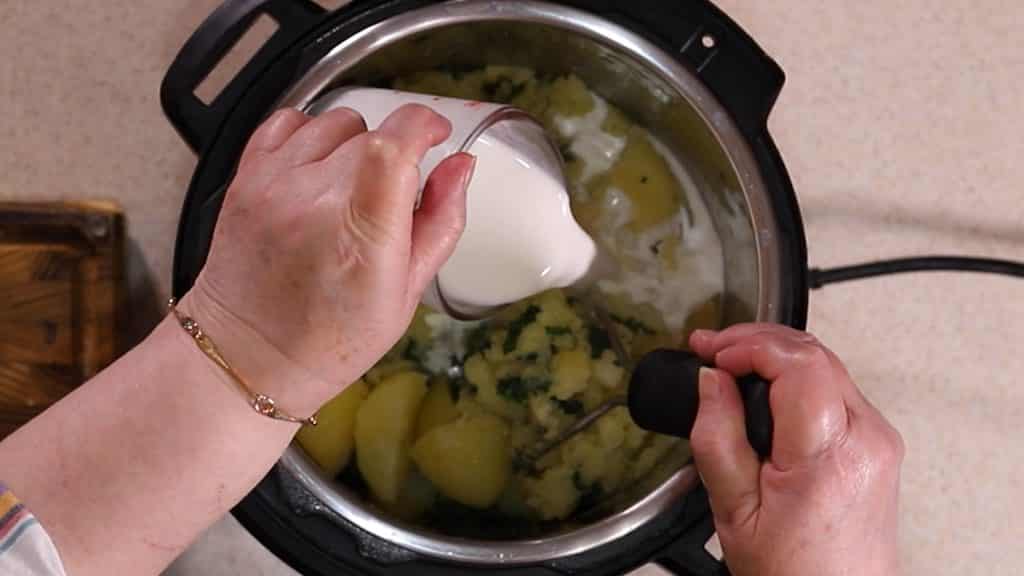 Add Cream, Milk or Half and Half

Pro Tip: Milk, cream or half and half is mashed in with the potatoes and kale.

Obviously, the heavy cream will make give Instant Pot Colcannon a very rich taste. I have used various milks and they are all delicious, so this is a personal choice. The cream really is fabulous though. 😉 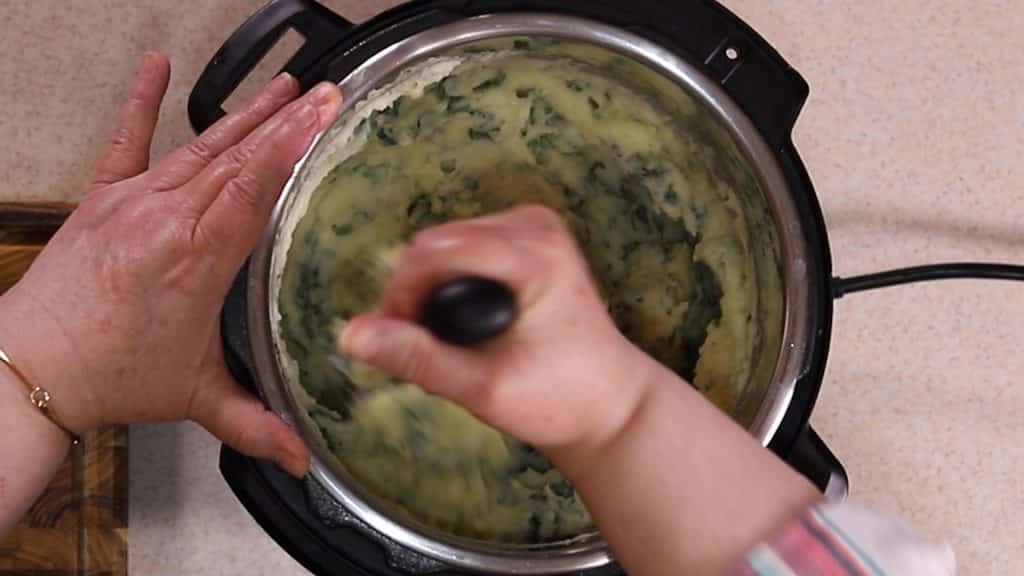 As you are mashing, the colcannon will absorb the milk. For a thinner finish, feel free to add more milk than what is stated on the recipe below.

What are variations to Instant Pot Colcannon?

Cooking the greens or cabbage in bacon grease would be delish. Then use the bacon to garnish the finished dish. 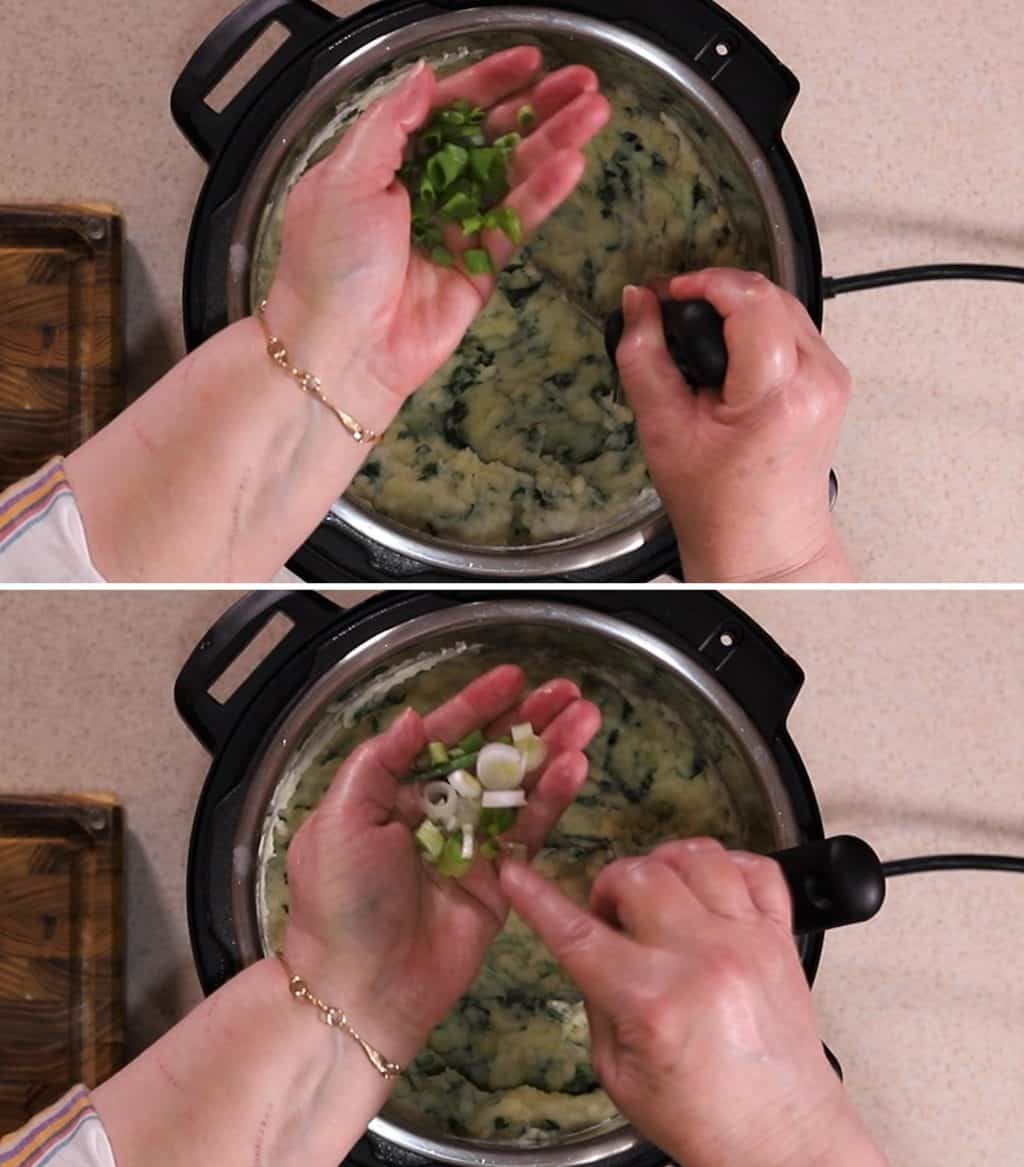 Lots of Chopped Scallions Give Great Flavor and Texture

I love having little crunchies in my colcannon.

Although colcannon originated in Ireland, it found its way to Scotland. It is sometimes referred to as rumdlethumps.

Instant Pot Irish Colcannon is great to use the next morning for breakfast like the English do. Fry up the colcannon and serve it along with meat or eggs. It is called “bubble and squeak.”

Watch the video below as I walk you through every step and detail of this recipe. I’ve given you a ton of information above, but sometimes a live visual of the process helps so you can follow along. I have my own cooking show on my YouTube Channel, so be sure to check it out and subscribe!

Watch my video and then scroll to the bottom for the printable recipe card.

Make Indentation in Center of Serving

In Ireland, the traditional way to eat colcannon is to first make a little indentation in each individual serving. 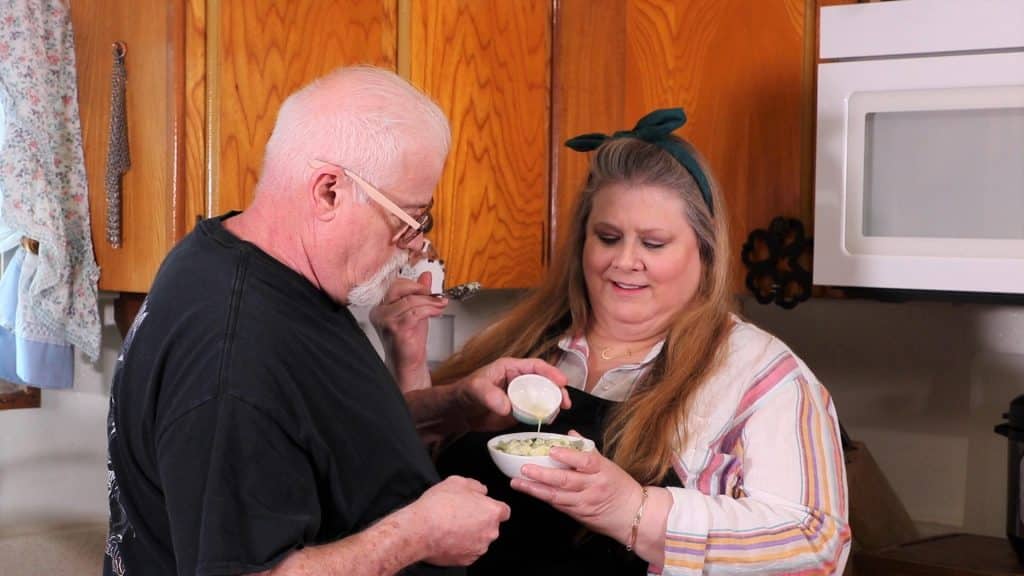 Put Butter into Center of Colcannon

Ed once ate a whole stick of butter when he was a wee little boy. Ed’s cholesterol is perfect. 🙂 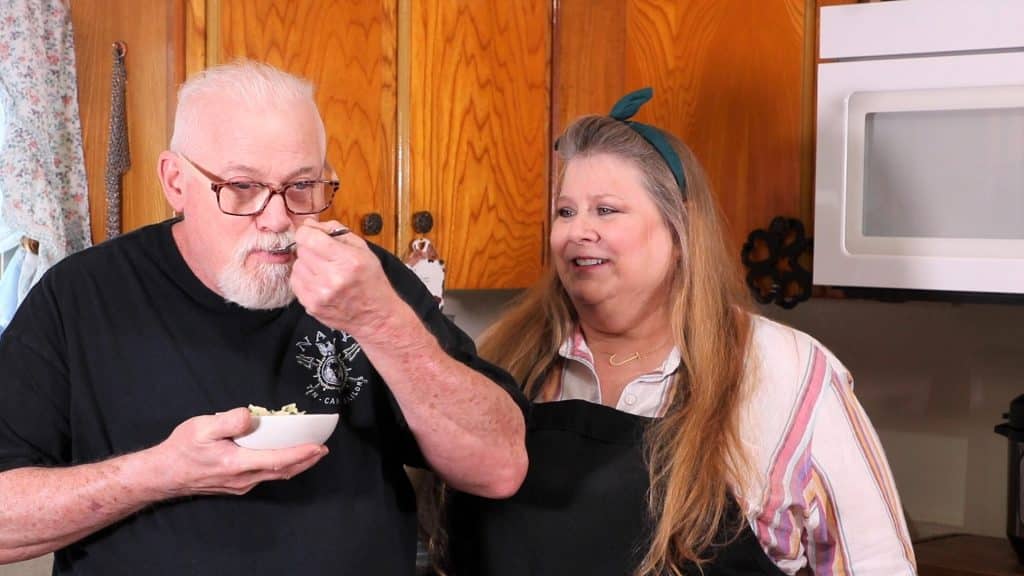 Nothing makes me happier than when someone as picky as Ed, enjoys my cooking.

Start off your St. Patrick’s Day celebration with a pint of Guinness!

Anything we can do in just one pot is great! Don’t you agree? 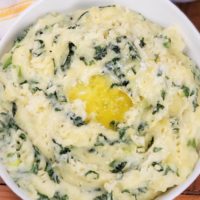 Can Instant Pot Colcannon be Frozen?

Other Greens and Veggies To Use in Place of Kale are:

To make this low carb, substitute celeraic, turnips, radish or rutabaga and following the same recipe. Cauliflower can also be used in place of potatoes, but reduce cook time to 2 minutes.

Nutrition Facts
Instant Pot Colcannon [Irish Potatoes and Greens]
Amount Per Serving
Calories 222 Calories from Fat 63
% Daily Value*
Fat 7g11%
Saturated Fat 4g25%
Cholesterol 18mg6%
Sodium 379mg16%
Potassium 931mg27%
Carbohydrates 36g12%
Fiber 2g8%
Sugar 3g3%
Protein 6g12%
Vitamin A 3635IU73%
Vitamin C 51mg62%
Calcium 114mg11%
Iron 2.1mg12%
* Percent Daily Values are based on a 2000 calorie diet.
Tried this recipe?Mention @ThisOldGalCooks or tag #thisoldgalcooks!
© ThisOldGal.com - Sharing the recipe link to any of my recipes posts are both encouraged and appreciated. Unauthorized and improperly attributed or non-attributed use of this material, including screen shots, copy/paste of full recipes to any social media site, website, mobile application or service (e.g., copymethat, recipe keeper, pepper) or cookbook, without the requisite attribution or otherwise with express written permission from Jill Selkowitz is strictly prohibited. You may share a photo with a link back instead. 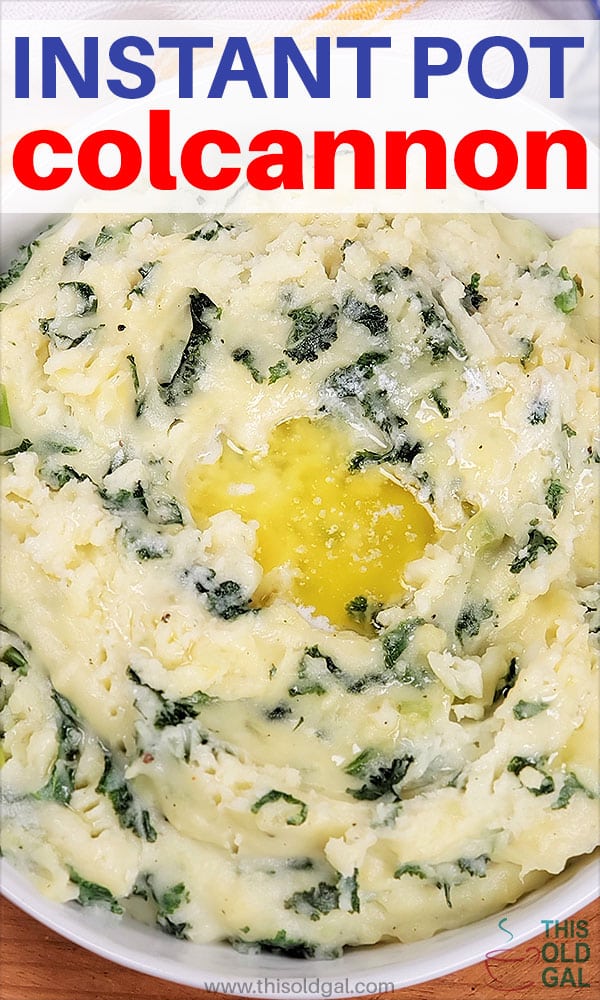