Jump to Recipe Go to Video 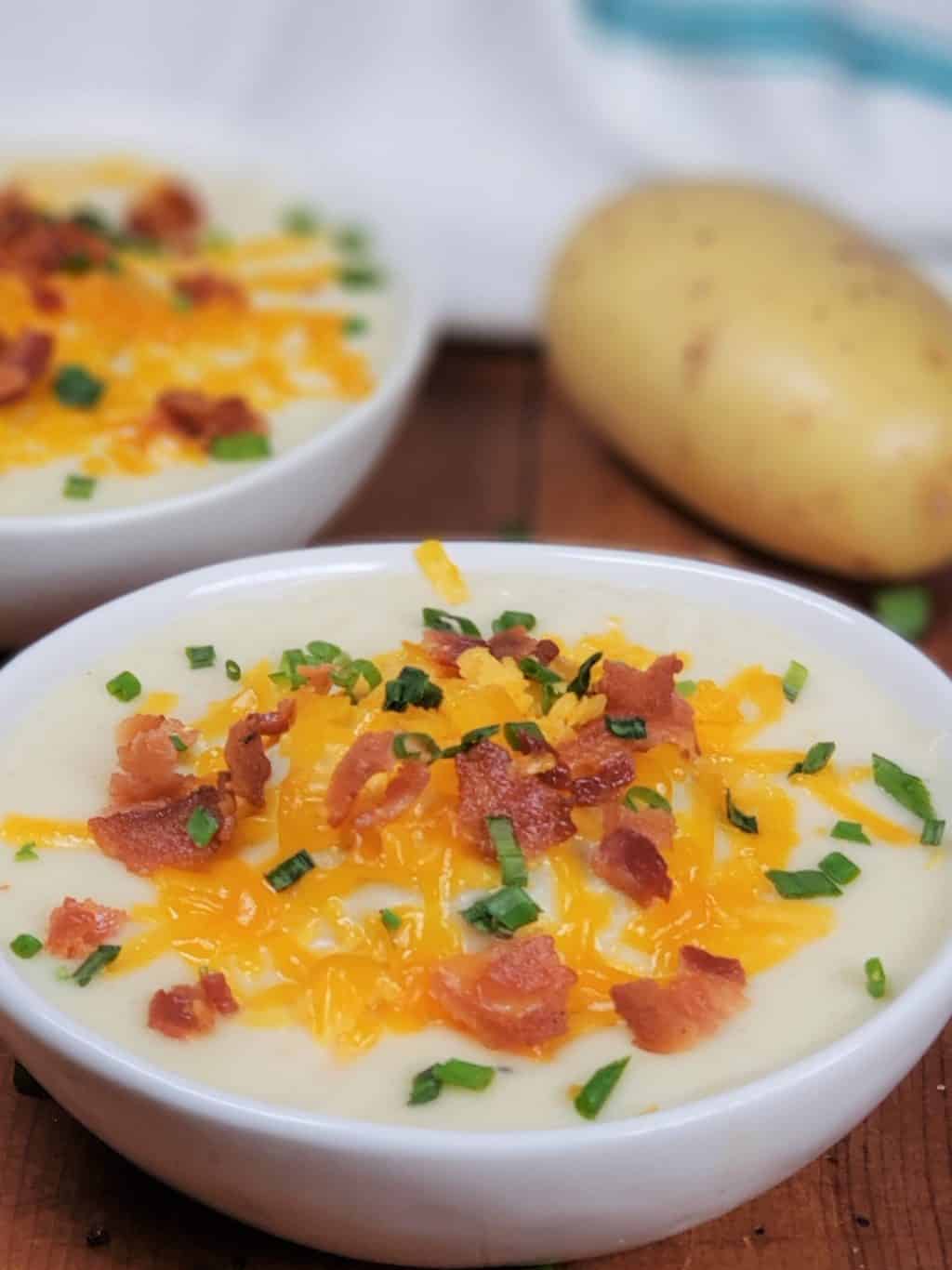 Get ready for the creamiest and best Instant Pot Baked Potato Soup evah!!!!

Imagine a loaded baked potato with all the trimmings, butter, sour cream, cheese bacon and chives and you’ve got yourself one heck of a warm and comforting bowl of Instant Pot Loaded Baked Potato Soup!!!

If you are following a low carb diet, try my Instant Pot Low Carb Cheesy Cauliflower Soup. It’s equally as good as this baked potato soup and just as rich. 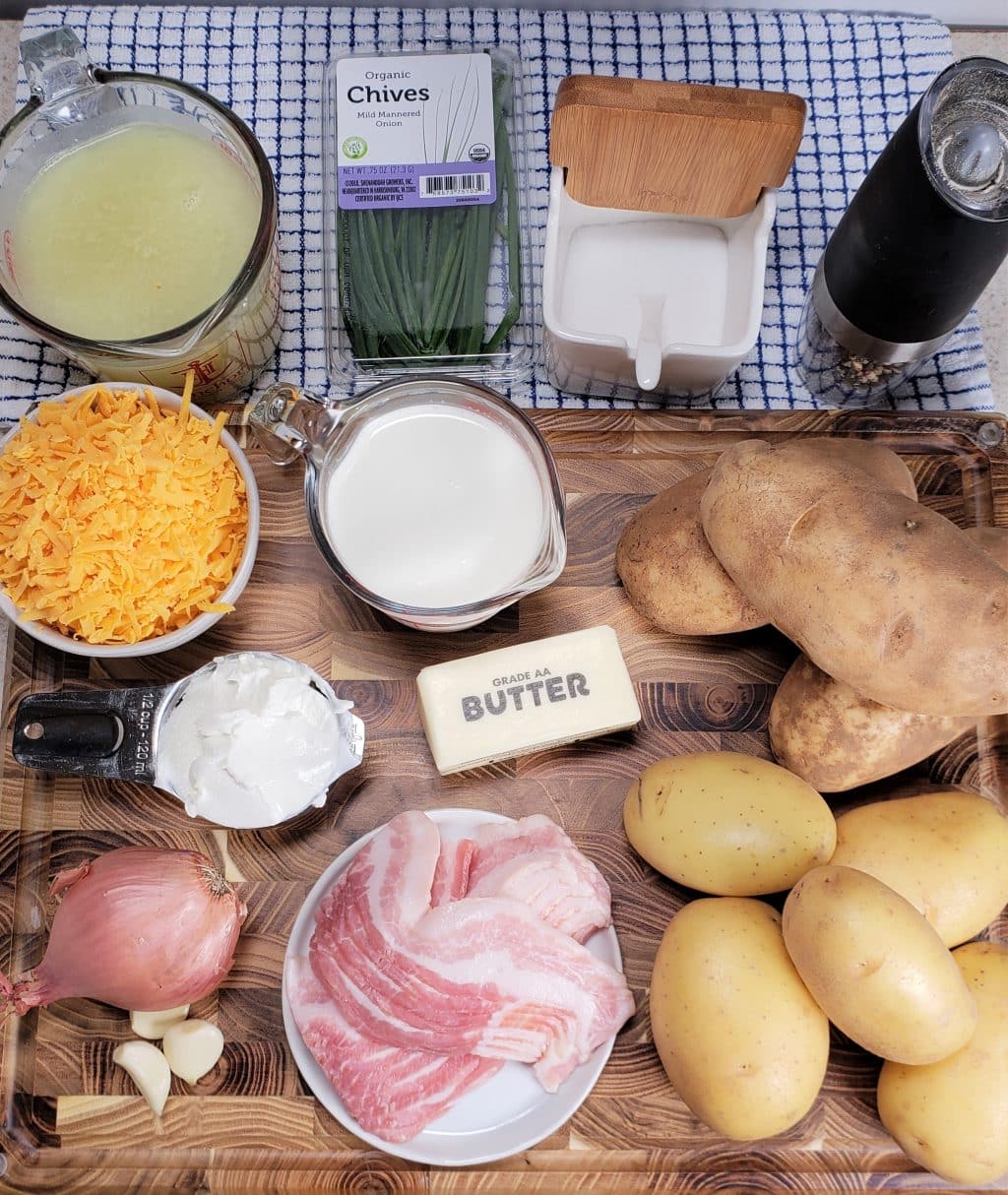 What makes this Loaded Baked Potato Soup so special is the use of two kinds of potatoes and sweet shallots.

Delicious Garnishes for Baked Potato Soup take this recipe over the edge.

Pro Tip: If you see a pressure cooker recipe for potato soup, which has you add in cornstarch or potato starch at the end to thicken the soup, run. Clearly the author doesn’t have a grasp of pressure cooking and probably just took a stove top recipe and tried to cook it in the pressure cooker, not realizing that less liquid is needed and why less is needed. 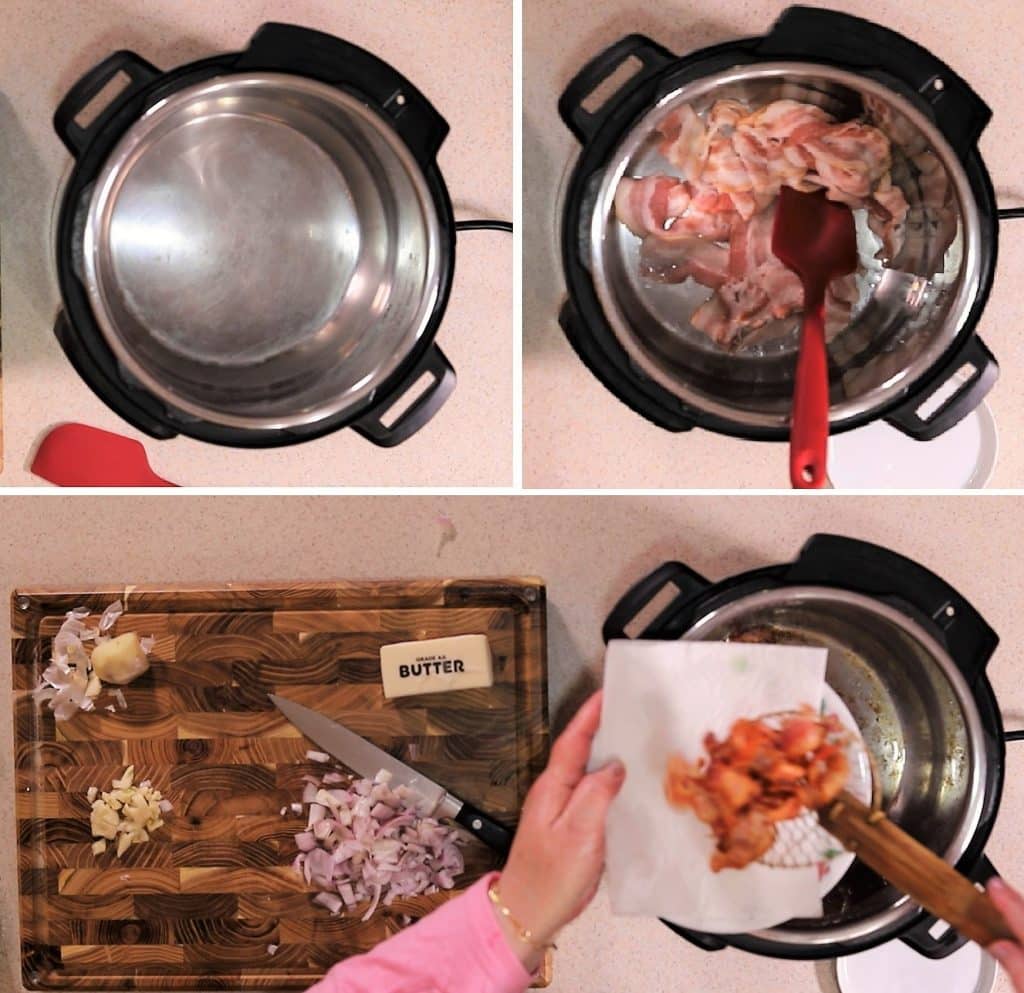 Bacon, bacon, bacon. Cooking bacon in the Instant Pot, Ninja Foodi or Pressure Cooker takes a bit longer than on the stove, but it is worth it to save another pot to clean, plus, the bits left behind in the pot add so much flavor.

Another benefit is that, you don’t have to stand over the skillet and worry about spattering your stove, walls and yourself.

When you dump out the grease (remember to leave about a Tablespoon in the pot), make sure to use a metal container or a Grease Strainer. This is the one we own, although Ed poured the grease into the Cafe Bustelo can. 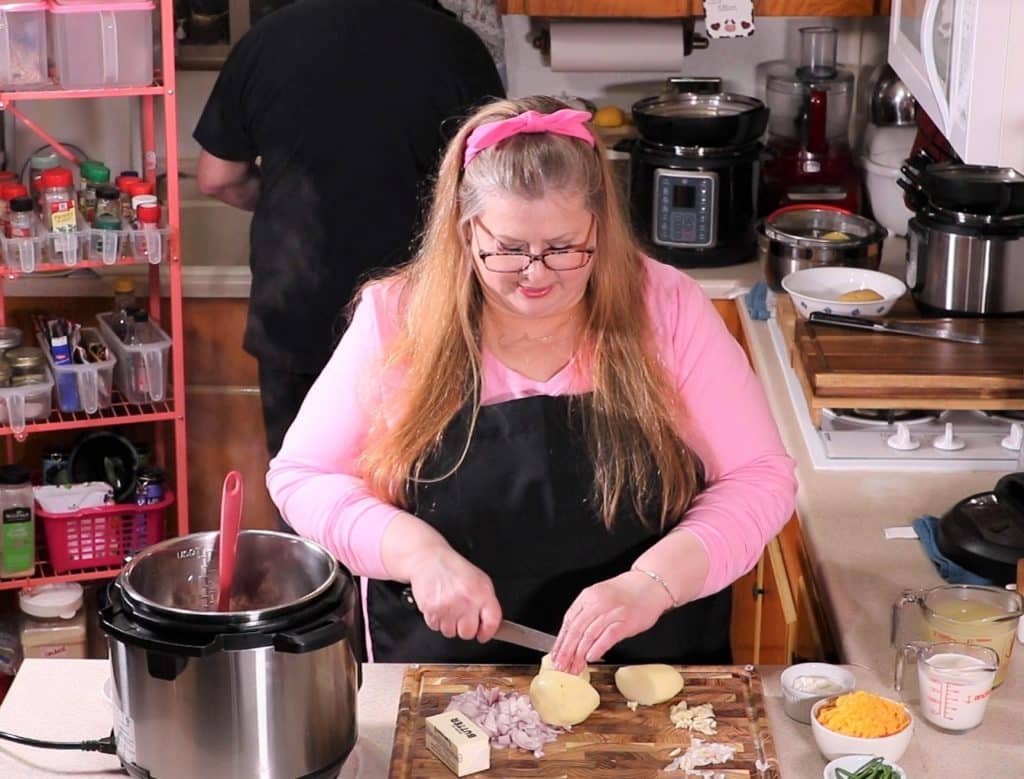 While the Instant Pot, Ninja Foodi or Pressure Cooker is cooking the bacon, all by itself, It is a good time to peel and chop the potatoes. It is like you have a sous chef. Oh wait, I spy another one. 🙂

I like to use both types of potatoes as they compliment each other very well. Instant Pot Baked Potato Soup is made with the perfect combination of potatoes for the best bowl of potato soup you will ever have. 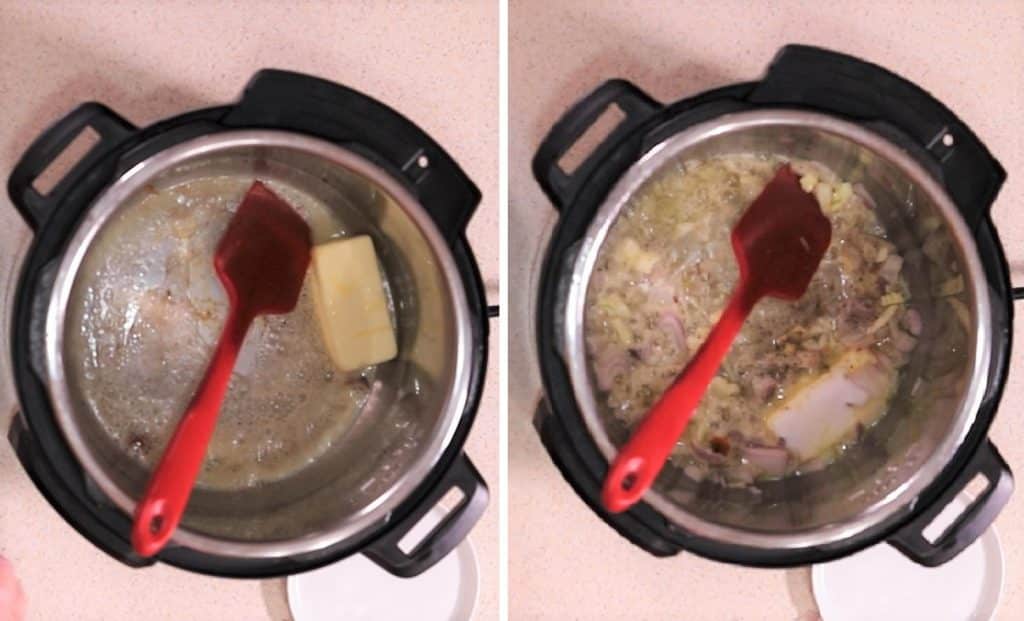 A good silicon spatula with a high heat capacity is great to use when scraping up fond. It won’t discolor or melt. 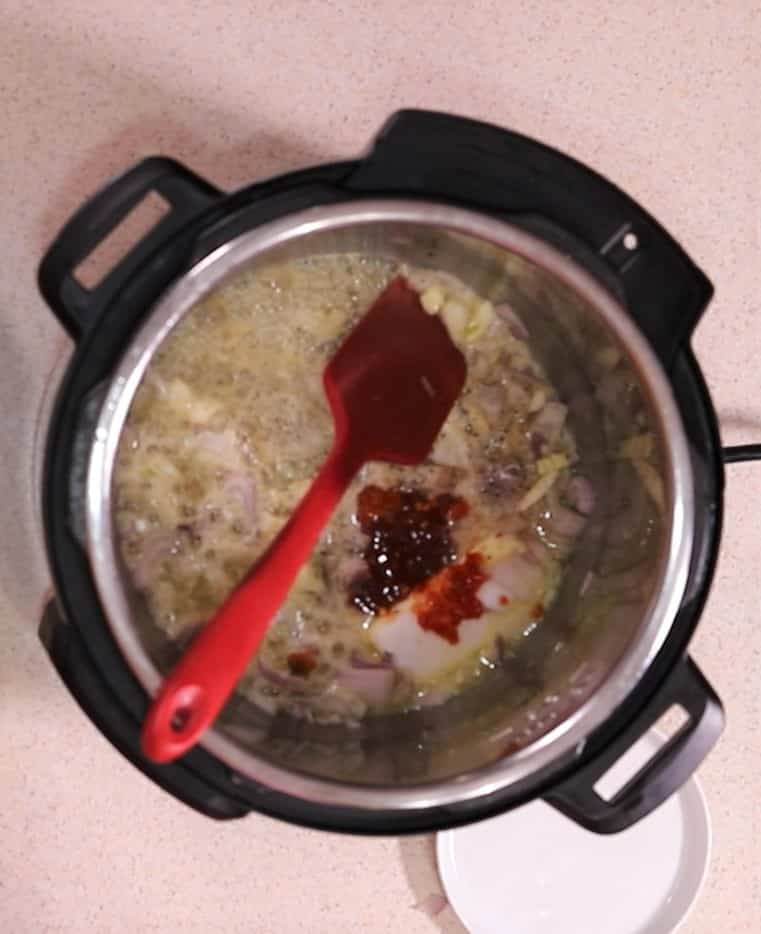 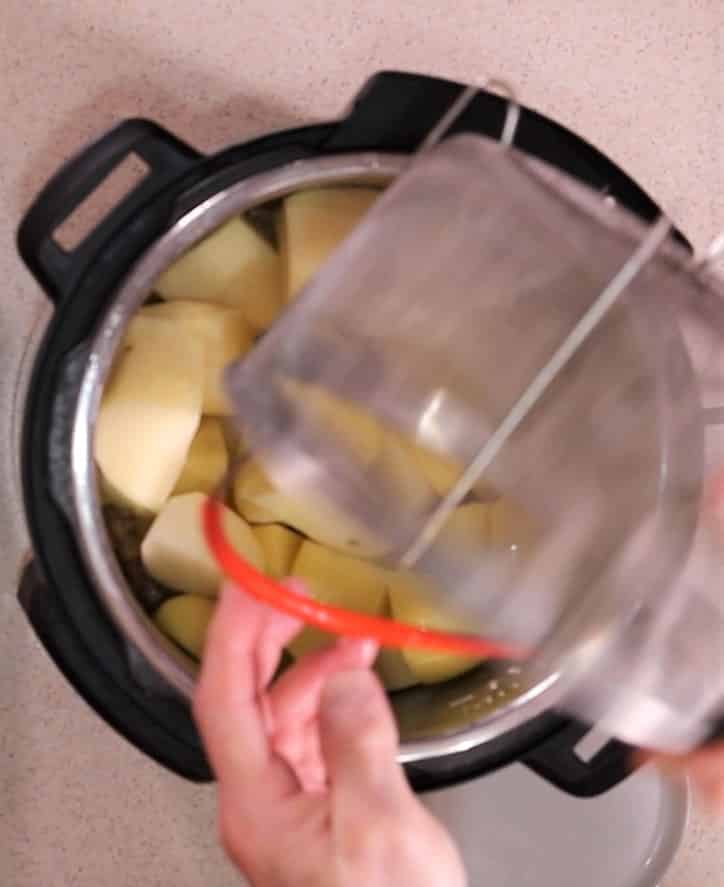 One of the beautiful things about making Baked Potato Soup in the Instant Pot, Ninja Foodi or Pressure Cooker is that you don’t have to worry about dicing up the potatoes. Large chucks will quickly cook to perfection.

No soaking of the potatoes is needed, but if you keep them in your Salbree Steamer/Strainer Basket  is and some water, the potatoes won’t oxidize and turn brown. Yuk! 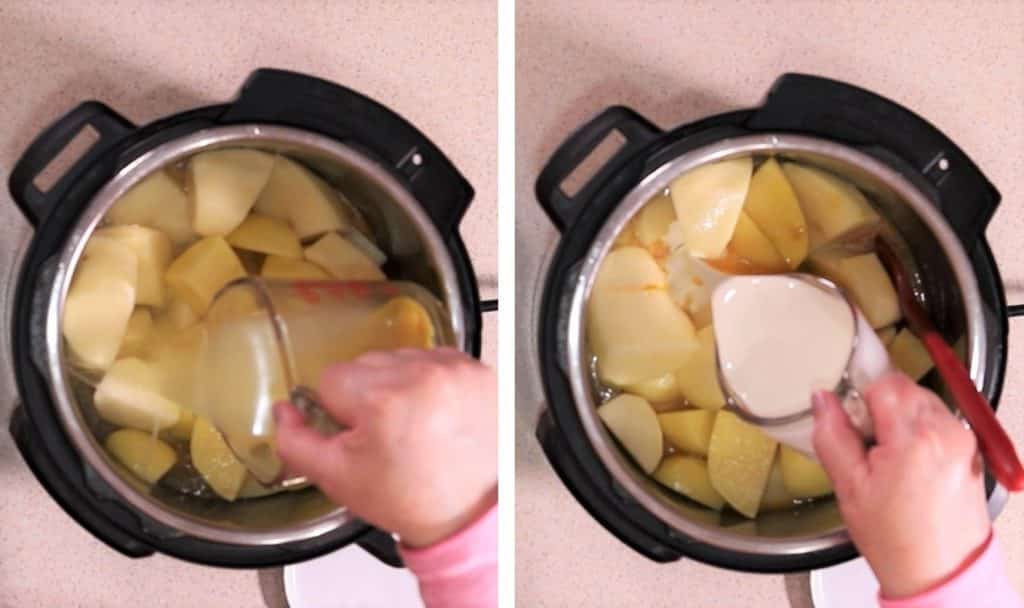 How to Use Better Than Bouillon Chicken Base.

Don’t be afraid to cook with heavy cream in your Instant Pot, Ninja Foodi or Pressure Cooker. There is enough fat in cream, so that the milk will not break. If you want to lighten up Instant Pot Loaded Baked Potato Soup, try using half & half, but add it in AFTER pressure has been released.

If you check out my Instant Pot Baked Ziti recipe, which is delicious, you will see that the noodles cook in heavy cream and help to form the sauce. 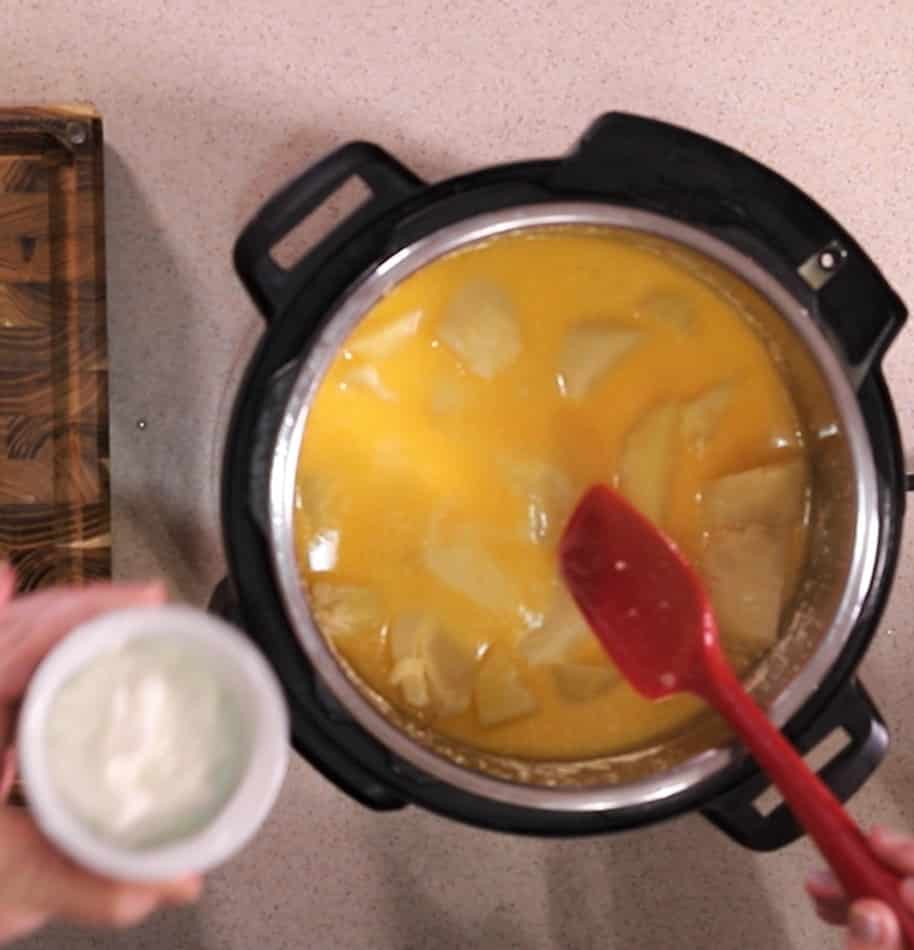 Otherwise, if you want to release it after a minimum of 10 minutes, make sure to do a very slow and controlled release, so that the soup does not come shooting out the pressure valve.

Use Immersion Blender to Blend Soup

You’ll need an immersion blender to blend the soup into utter creaminess. 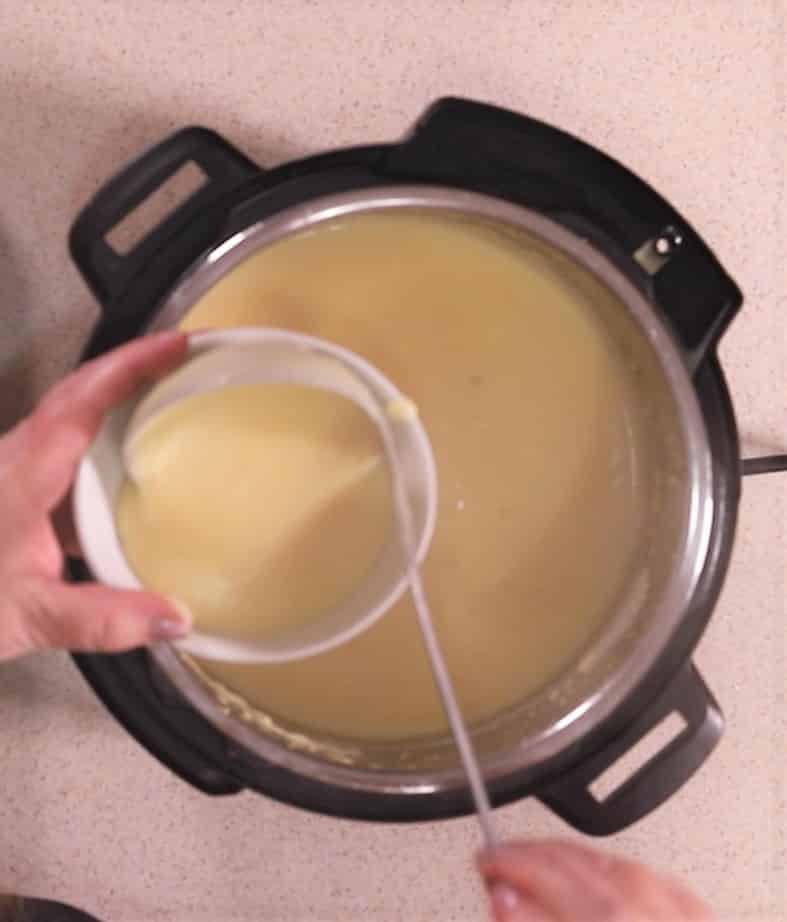 Ladle Instant Pot Loaded Baked Potato Soup into a bowl. You will want to use a big bowl.

Time to load up with toppings! 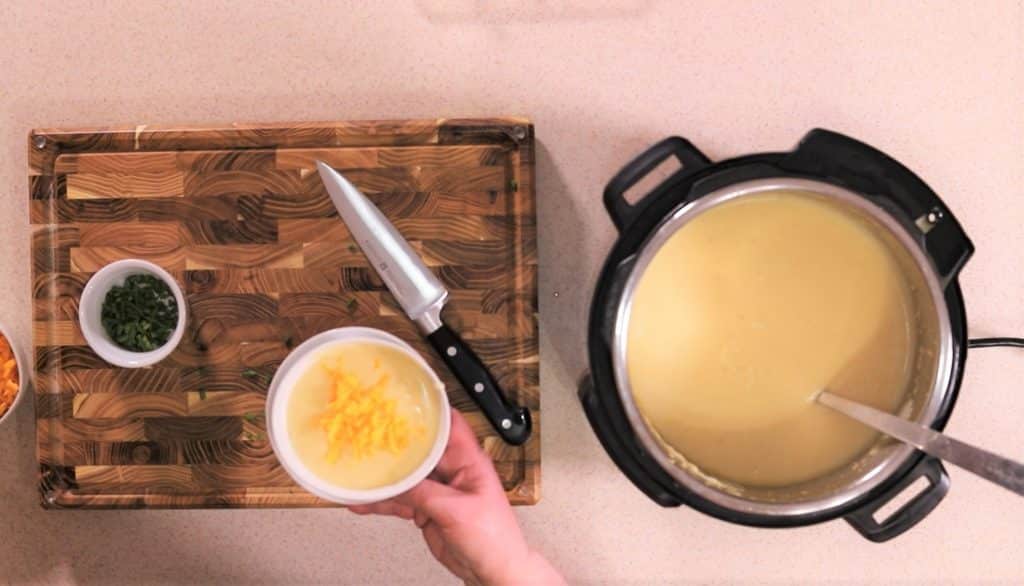 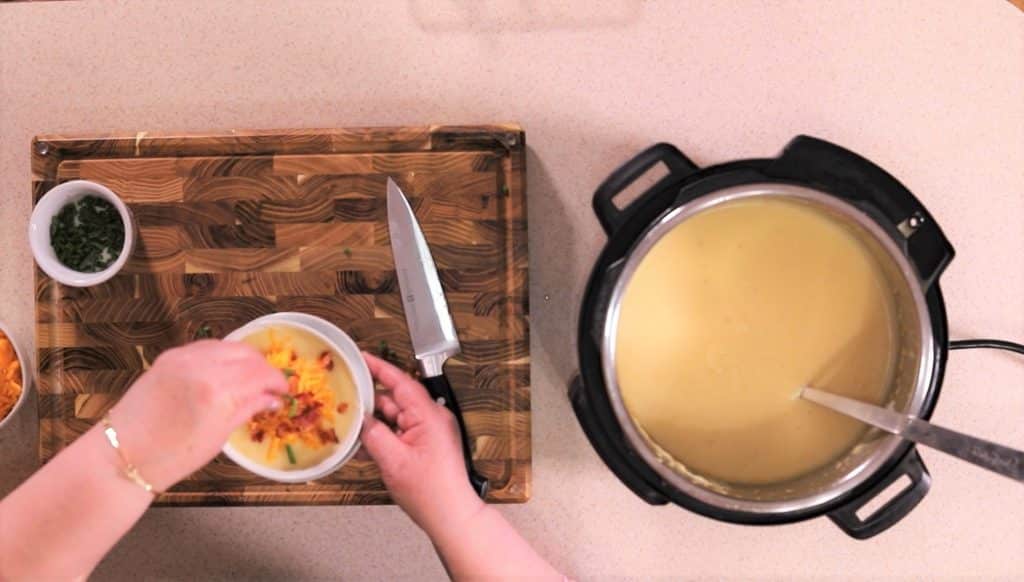 Crumbled Bacon on Top of Cheese

Remember the bacon we cooked? Crumble it up and add it on top of the cheese.

If you are a lover of turkey bacon, there is no problem using that instead of pork bacon. 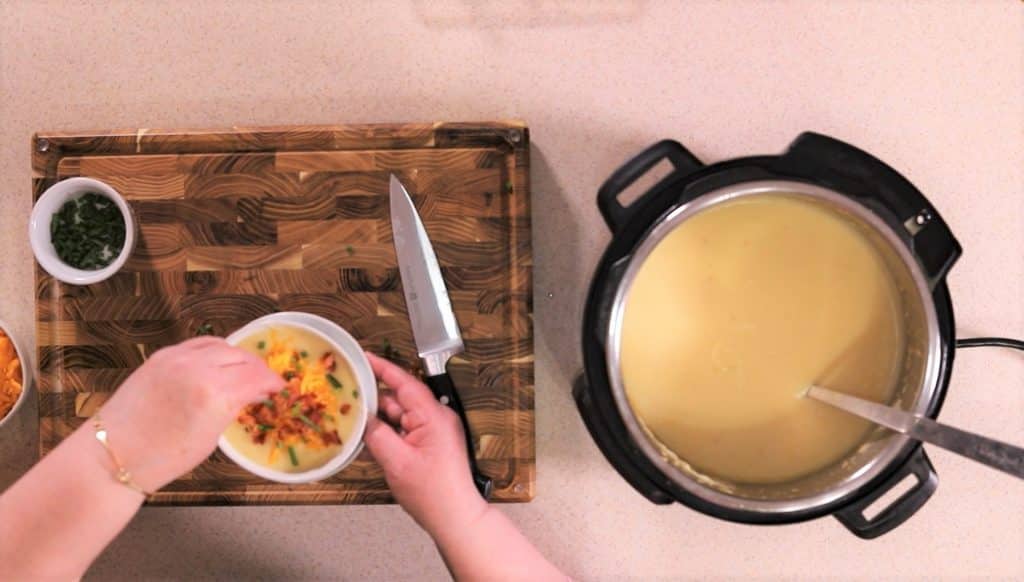 Fresh chives are always the best, but if you don’t have access to the chives, dried chives will also work nicely.

The chives give a bit of an onion tasty. Ed grew these chives! 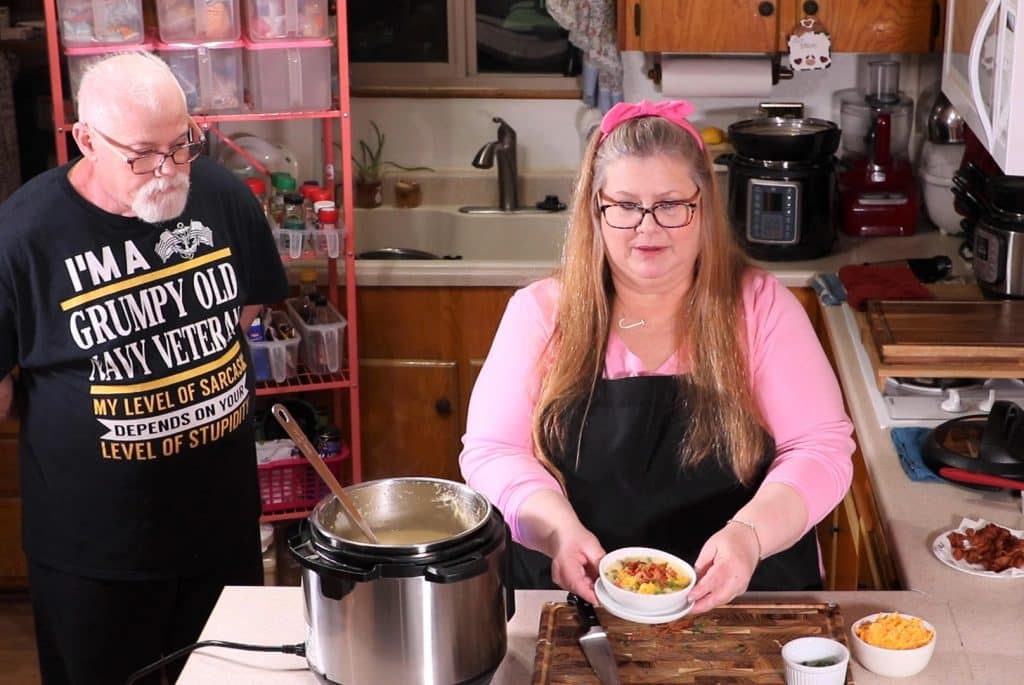 Note to self: put up a mirror, so you can see you are about to be rushed for a bowl of Instant Pot Baked Potato Soup.

But I need to lose weight anyway, so it is probably for the better. That being said, check out my yummy Low Carb Brussels Sprouts in Alfredo Sauce. They are so delicious and they are low carb! 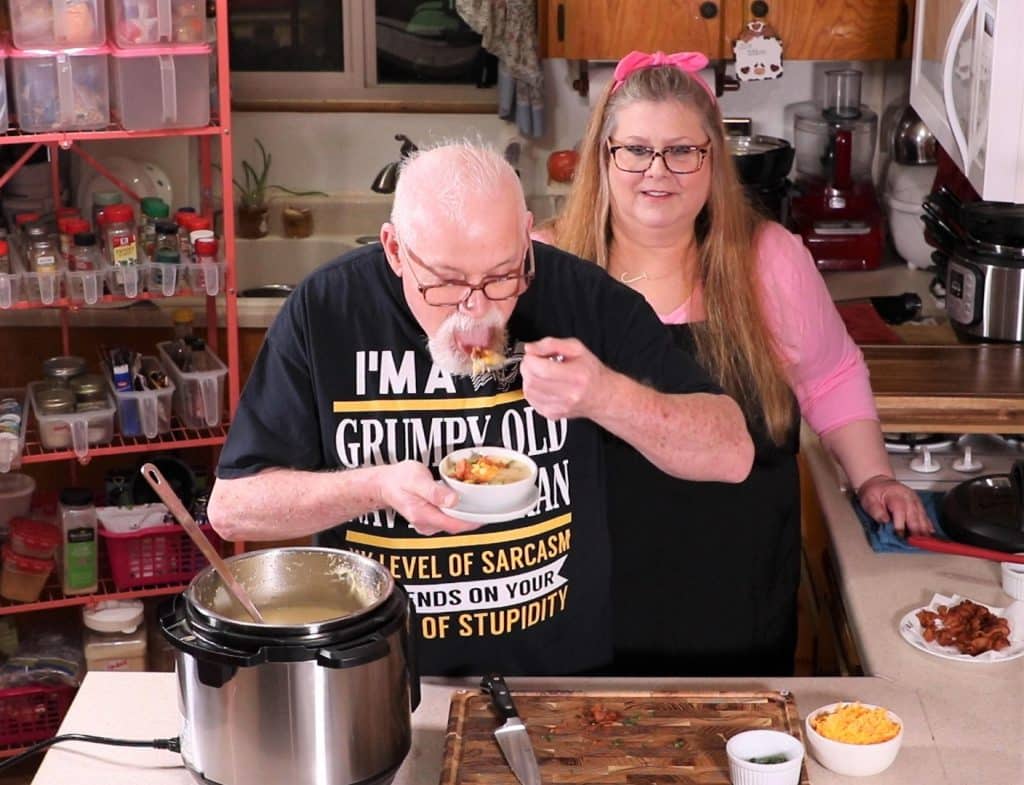 When your picky eater loves the soup so much, he can hardly talk, you just feel so warm and fuzzy inside.


Watch my video and then scroll to the bottom for the printable recipe card.

Let’s load this baby up! Like any good loaded baked potato, you are going to want to add butter, sour cream, cheese, bacon and chives.

With Instant Pot Baked Potato Soup, the butter and sour cream are already in the soup, so just top with cheese, bacon and chives. Lots and lots of chives.

If using a Instant Pot DUO Mini Plus 3 Quart Pressure Cooker, you will want to cut this recipe in half.

Here is the handy printable recipe.: 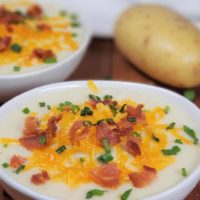 Sambal Oelek Ground Chili Paste will not make this Instant Pot Baked Potato Soup Spicy. It is a very nice and pure chili flavor, which does not interfere with other flavors and will boost up the flavor. You can leave it out, if you like, but I suggest trying it with the chili paste, at least once. Russets are a starchy potato and normally it is recommended to soak them in water prior to cooking. However, in this baked potato soup recipe, there is no need to soak. Since they offer up some starch, you won't have to add any flour or potato starch to thicken. Natural potato starch is built right in. Yukon Gold potatoes have a nice and creamy center with hints of butter. They do very well in liquids too! P.S. If you see a pressure cooker recipe for potato soup, which has you add in cornstarch or potato starch at the end to thicken the soup, run. Clearly the author doesn't have a grasp of pressure cooking and probably just took a stove top recipe and tried to cook it in the pressure cooker, not realizing about the starch from the Russets and also that less liquid is needed and the reason why less is needed. 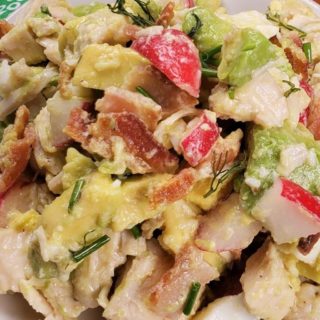