Instant Pot Olive Garden Zuppa Toscana Italian Soup is better then the restaurant and on your table in less than 30 minutes. Use Radishes instead of Potatoes to make it Low Carb and Keto! 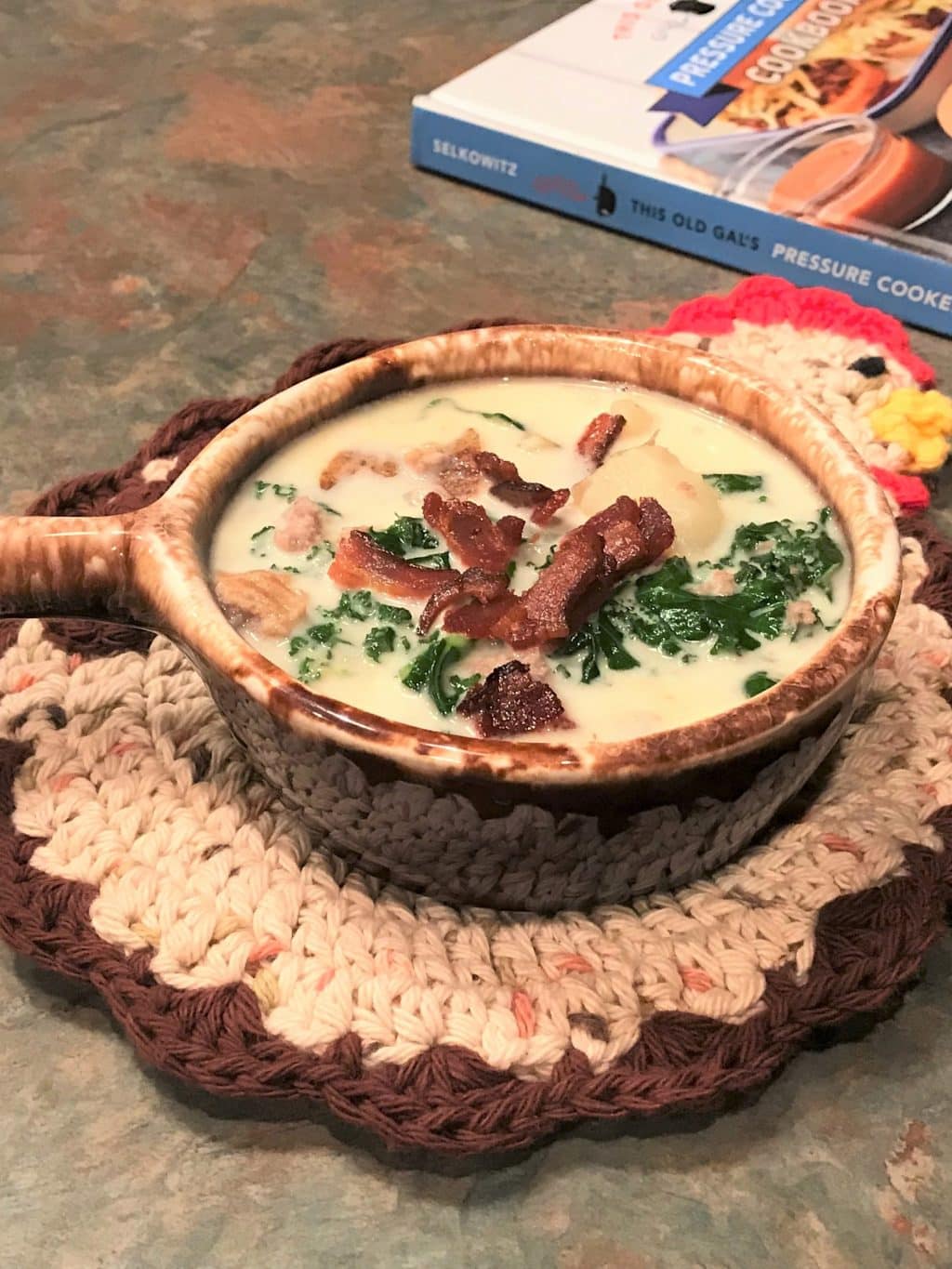 Using your Instant Pot, Ninja Foodi or Pressure Cooker, Instant Pot Olive Garden Zuppa Toscana Italian Soup can be on your table in less than 30 minutes!

In 1990, I taught aerobics at Slimmons, Richard Simmons studio in Beverly Hills and after Sunday’s class, some of us would go to lunch and a movie or shopping. At least once a month we would land at The Olive Garden. Soup, salad and breadsticks. I always ordered minestrone and others got the Zuppa Toscana.

This recipe is like the Olive Garden Garden Zuppa Toscana on steroids!

I’ve never enjoyed the food at Olive Garden, other than what I have mentioned above. Frankly, I am not sure how that chain stays in business. (OMG, did I say that?) That being said, my Instant Pot Italian Chicken Olive Garden recipe is fantastic. Clearly, because of the dressing and everyone loves an Olive Garden salad.

The original Olive Garden Zuppa Toscana Italian Soup uses mild sausage and red pepper flakes, but you can get the same effect using hot sausage only.

There are two ways to cook the bacon.

How to Cook Bacon for Instant Pot Zuppa Toscana

I’ve explained both processes in detail on the recipe card below.

The original Olive Garden Zuppa Toscana Italian Soup uses mild sausage and red pepper flakes, but you can get the same effect using hot sausage only. 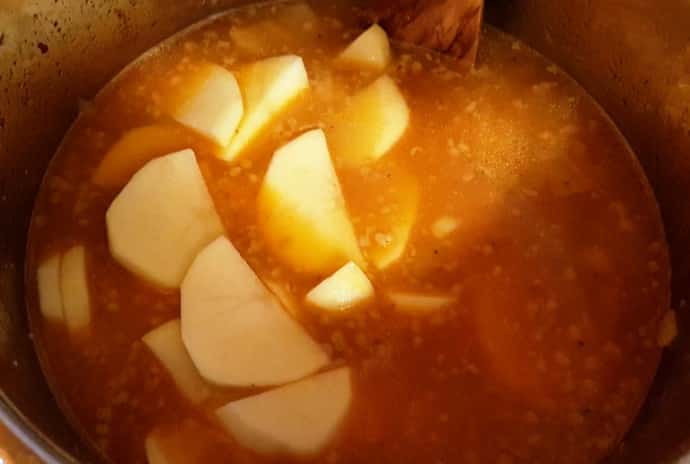 Pretend the potatoes are not peeled. Just close your eyes for a second and try to get this photo out of your mind. My husband was trying to be helpful and peeled the potatoes when I wasn’t looking.

What Type of Potatoes for Instant Pot Zuppa Toscana?

Whichever potato you choose, don’t peel off the skins. The peels give good flavor, so don’t peel them.

I think I like the Zuppa a bit better with Russet Potatoes, rather than red potatoes, but use whatever you like or have in the house.

Cut the Kale into a Chiffonade

After removing the veins from the kale, I like to use a cutting technique called, Chiffonade.

If you don’t like kale and many people don’t, just use spinach instead. You will still get that nice and spicy yummy taste from the soup. 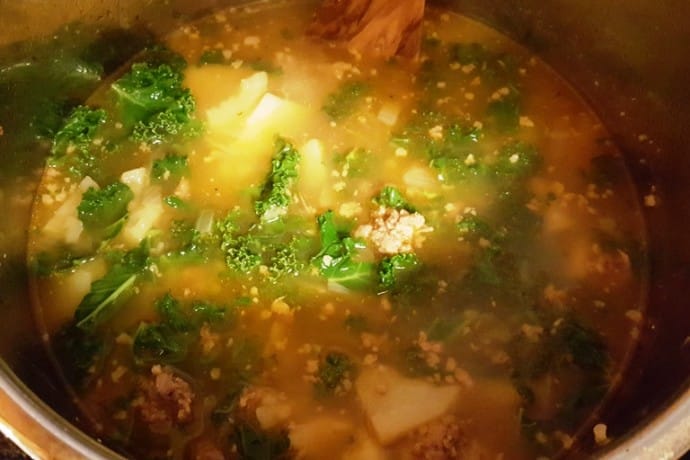 There is only a five minute cook time, but this Instant Pot Olive Garden Zuppa Toscana tastes like you have been cooking all day.

If you keep the ingredients in your freezer, you can whip up a batch on a moments notice.

If you love soup and need a very simple recipe for a delicious soup, check out my Pressure Cooker Nordstrom Tomato Basil Soup recipe.

My Pressure Cooker Seafood Corn Chowder {Shrimp Gumbo} is a meal in itself, with spices you probably already have in your pantry. 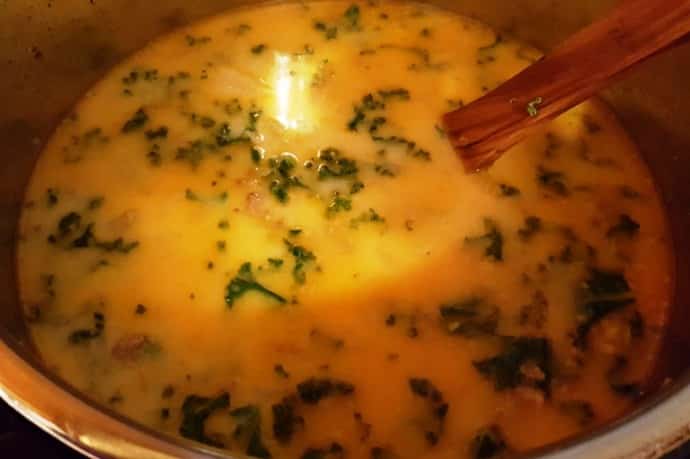 Add Cream and Simmer until Hot

Some people want to save calories and use substitutes for the heavy cream.

It won’t be as satisfying, so I suggest using the full fat and having a smaller portion.

Note that if you do use Half & Half instead of heavy cream, you will want to add the Half & Half to the soup before adding the kale. Otherwise, the heavy cream will cook with the soup.

Pro Tip: Heavy cream does well under pressure and can be added to the raw ingredients. Half & Half and milk would be added after the food has finished cooking and after pressure has been released.

Don’t forget to serve with Breadsticks or a Crusty Loaf of Bread or with some Nordstrom Parmesan Garlic Crostini.

Another soup you may like is my Pressure Cooker Nordstrom Tomato Basil Soup.

Dorinda, one of the members of my This Old Gal Facebook Group, purchased my This Old Gal Pressure Cooker Cookbook and made the soup from the book. It is slightly different. Dorinda is a much better photographer than me. Plus, don’t you love the chicken hot pad?

Mild Sausage can be substituted for the Hot Sausage and add Hot Pepper Flakes to get the heat. If using Half & Half instead of cream, add it in after you have released all the pressure. Heavy cream has a high enough fat content, so it can be cooked under pressure.

Crisping Lid - Which to Use