Instant Pot Three Ingredient Japanese Cotton Cheesecake is a creamy, yet light and airy cheesecake which wiggles and jiggles and is made in a pressure cooker.

With the cheesecake craze going on, and people messaging me about a Japanese “Cotton” Cheesecake, I just had to see what all the fuss was about and if I could convert the Japanese Cotton Cheesecake to the Instant Pot, Ninja Foodi or Pressure Cooker.

This recipe went viral when Chef Ochikeron brought it to the attention of the World, using just three ingredients. This is Chef Ochikeron’s “Three Ingredient Japanese Cotton Cheesecake,” converted to the Instant Pot, Ninja Foodi or Pressure Cooker.

Don’t use Hershey’s or Nestles and try to get a good Swiss chocolate bar. Really most European and Australian chocolate bars are better than any US chocolate.

The chocolate in the US hasn’t been very good for years. Too many fillers and ingredients to prevent the chocolate from melting in the warm weather.

Ingredients Should Be Room Temperature

When making regular cheesecakes, it is important to check out my article on Instant Pot Perfect Pressure Cooker Cheesecake Tips Guide. There are more helpful tips and you will always have perfect cheesecake.

The chocolate can be melted using a 1-1/2 Quart Stainless Steel Saucepan or in the pressure cooker.

You know that white chocolate isn’t actually chocolate, right? It’s just a bunch of flavoring and oil, but, oh, how I love it. Another recipe which uses white chocolate is my Instant Pot Peppermint Milkshake Cheesecake. It is a fantastic recipe and is very popular, especially for Christmas dessert!

How to Melt Chocolate In Instant Pot

While the chocolate is melting prepare the egg whites. 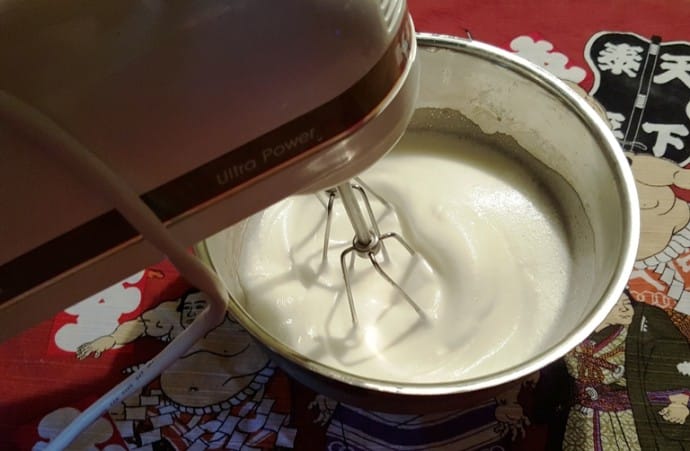 Egg Whites and Their Peaks

In working with egg whites, there is a term called “peaks.” It has to do with the firmness of the egg whites after beating. This is a very important step in making cakes and pies and the proper peak is needed for success.

What are Soft Peaks?

What are Medium Peaks?

What are Hard or Firm Peaks?

Pro Tip: If the egg whites are mixed past the hard peak stage, they will soften up and become useless for making any firmness of peak.

Add the melted white chocolate to your room temperature cream cheese and whisk it together well.

Check out my Instant Pot Greek Yogurt recipe to see tempered starter. Want to hear a joke? After seeing so many IP yogurt failures, I set off to figure out why and documented all issues in my 2016 yogurt post. Because so many people copy recipes (and take credit), I added in the tempering step, which is totally not necessary as the milk cools down enough. I just put that step in there to see who would copy that step and guess what? You guessed it…..so, now you know.

How to Temper Egg Yolks

The egg yolk and hot cream cheese mixture should be nice and smooth and free of lumps.

Often times you will see an instruction telling you to “fold in” an ingredient. It is usually used for baking cakes and delicate egg dishes like a quiche. Speaking of quiches, try my Pressure Cooker Frosted Egg Cupcakes Frittata recipe. It’s not a quiche, but it sure is delish.

What Does it Mean to Fold In? 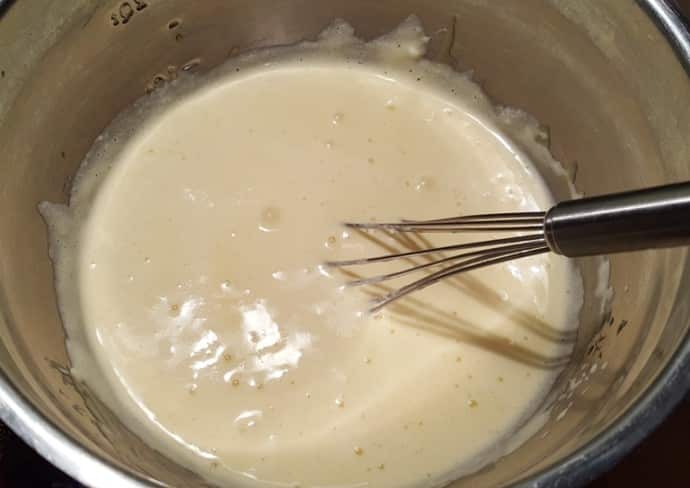 Take time to incorporate the egg whites with the cream cheese mixture. You want to make sure to use a spatula, not a whisk. (Yes I know, I accidentally put my whisk in there before snapping the photo)

A Three Ingredient Japanese Cheesecake should be very light and airy unlike my famous Instant Pot New York Cheesecake with is dense and heavy.

A 6″ Fat Daddio’s Push Pan is ideal for this recipe. It will give you a nice height.

Place a Parchment Round on the bottom of your pan and place Parchment Paper around the pan. 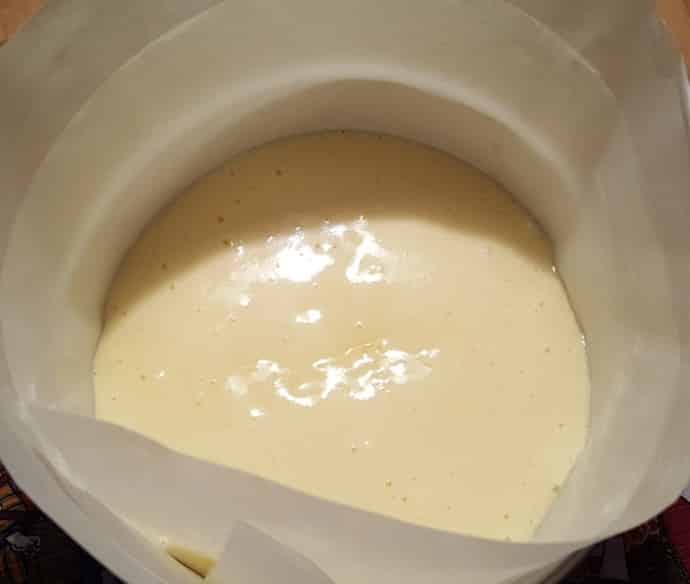 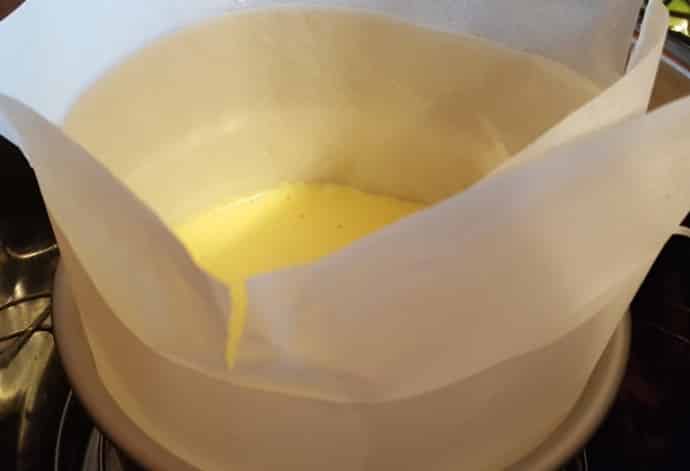 Gently use your Homemade Foil Sling and lower the Pan into the Pressure Cooker.

Pro Tip: Cut four slits in the parchment paper, so that when you close the lid, it will protect the cake from too much condensation. 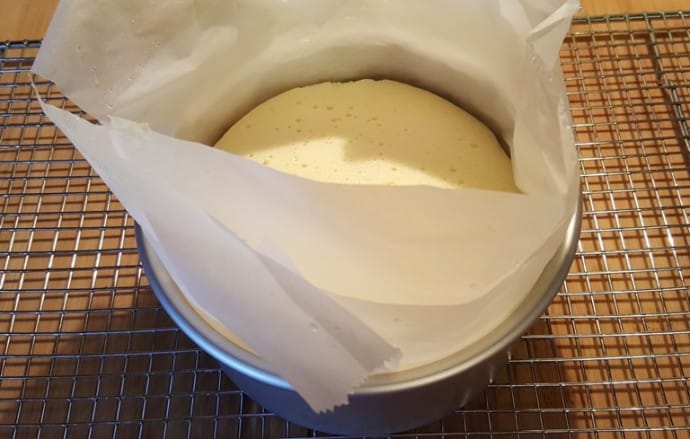 After cooking, the Instant Pot Three Ingredient Japanese Cheesecake should completely on a baking rack.

This ensures that the bottom is up off the counter and air can circulate around the pan. During the cooling time, the heat inside the cake will gently allow the cake to finish cooking and then cool.

Some people like to sift powdered sugar on top. A dollop of Lemon or Lime Curd would be delicious on top of each slice! 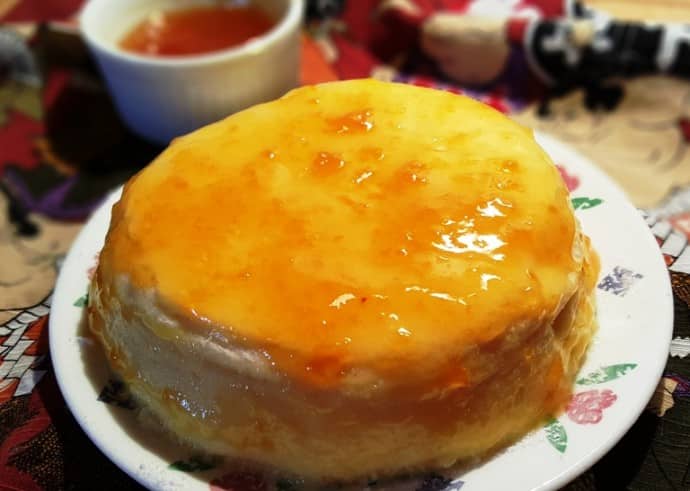 Some people like putting an Apricot Glaze on the top and sides.

Allow the cheesecake to become room temperature. Put egg whites in refrigerator to keep cold. Place the beaters from your electric hand mixer in freezer so that making medium peaks is quick and easy. If the egg whites are mixed past the hard peak stage, they will soften up and become useless for making any firmness of peak.

Nutrition Facts
Instant Pot Three Ingredient Japanese Cotton Cheesecake
Amount Per Serving
Calories 127 Calories from Fat 63
% Daily Value*
Fat 7g11%
Saturated Fat 4g25%
Cholesterol 84mg28%
Sodium 149mg6%
Potassium 114mg3%
Carbohydrates 10g3%
Sugar 10g11%
Protein 6g12%
Vitamin A 123IU2%
Calcium 94mg9%
Iron 1mg6%
* Percent Daily Values are based on a 2000 calorie diet.
Tried this recipe?Mention @ThisOldGalCooks or tag #thisoldgalcooks!
© ThisOldGal.com - Sharing the recipe link to any of my recipes posts are both encouraged and appreciated. Unauthorized and improperly attributed or non-attributed use of this material, including screen shots, copy/paste of full recipes to any social media site, website, mobile application or service (e.g., copymethat, recipe keeper, pepper) or cookbook, without the requisite attribution or otherwise with express written permission from Jill Selkowitz is strictly prohibited. You may share a photo with a link back instead.