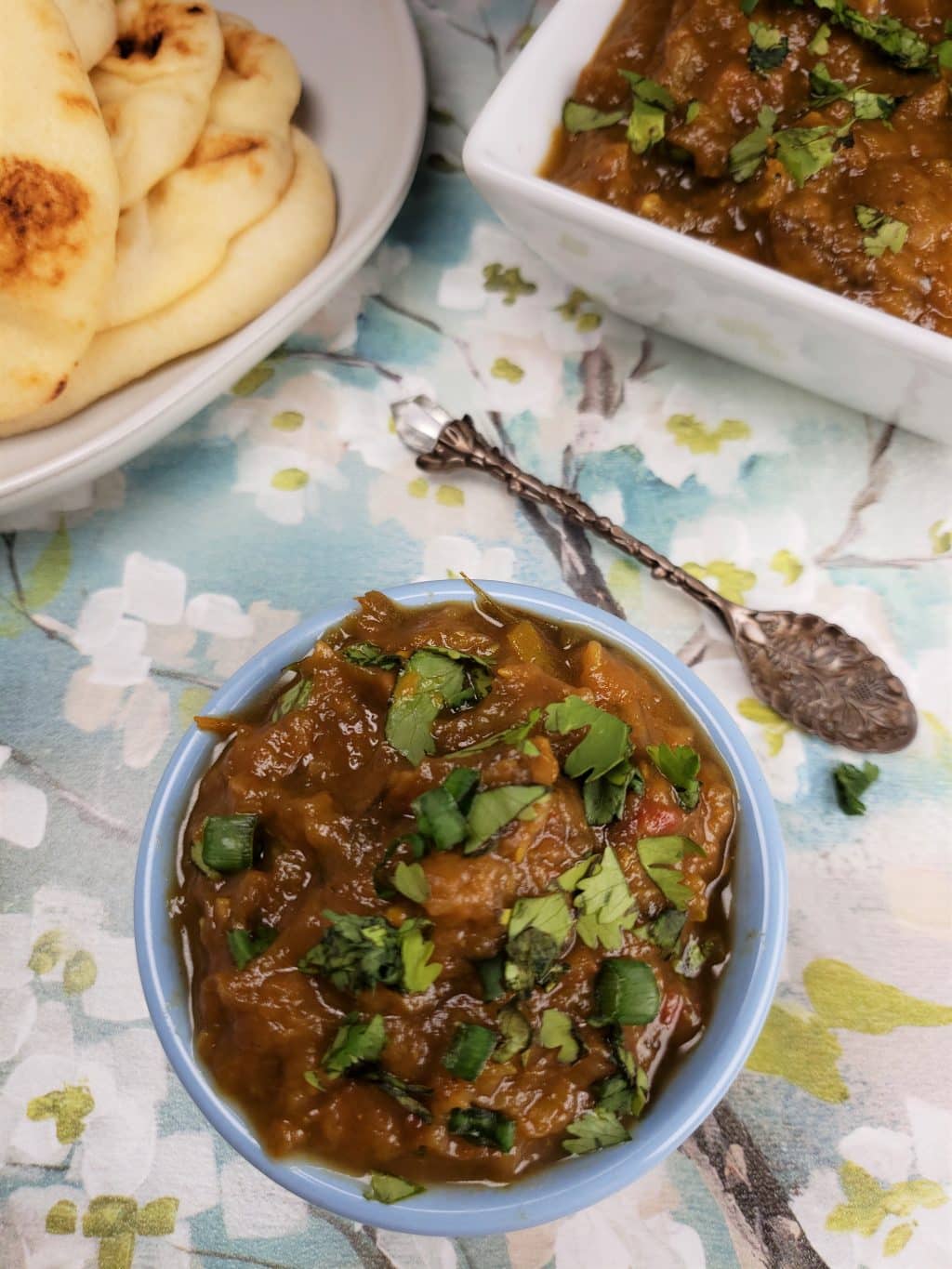 Anyone who knows me, knows how much I love vegetarian Indian Food.

For years, a friend and I ate vegetarian Indian food at a cute little hole in the wall off of Venice Boulevard, in Los Angeles, California.

Pressure Cooker Baingan Bharta {Smashed Eggplant} is one of the greatest vegetarian Indian food creations of all time.

That, along with Saag Paneer, which is spinach and Indian cheese (recipe for the Panner is in my new cookbook, called This Old Gal’s Pressure Cooker Cookbook) and Matar Paneer {Indian Peas and Cheese in Gravy) are my three favorites. The Matar Paneer will be in the cookbook, as well.

I’ve created this very easy version of Instant Pot Baingan Bharta, which is made in the Instant Pot, Mealthy MultiPot or Pressure Cooker in just one step. 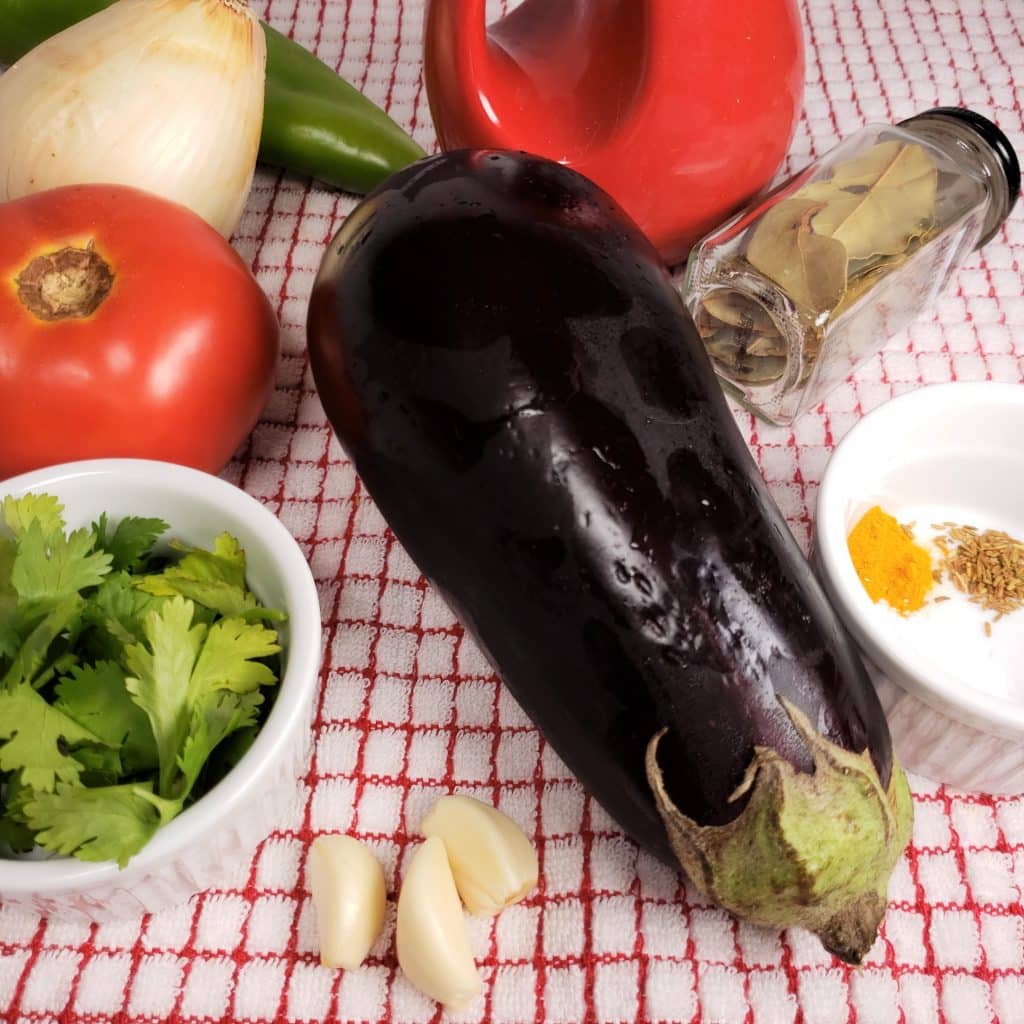 I talked about how much I love vegetarian Indian food in my Pressure Cooker Butter Chicken recipe, which is incredibly delicious.

People tell me it is the best they have ever had!

What is Baingan Bharta?

It is served with Naan or Rotis (Chapatis), which are Indian flatbreads.

My Indian recipes are very authentic and delicious, as Indian food is in my top five favorite cuisines. 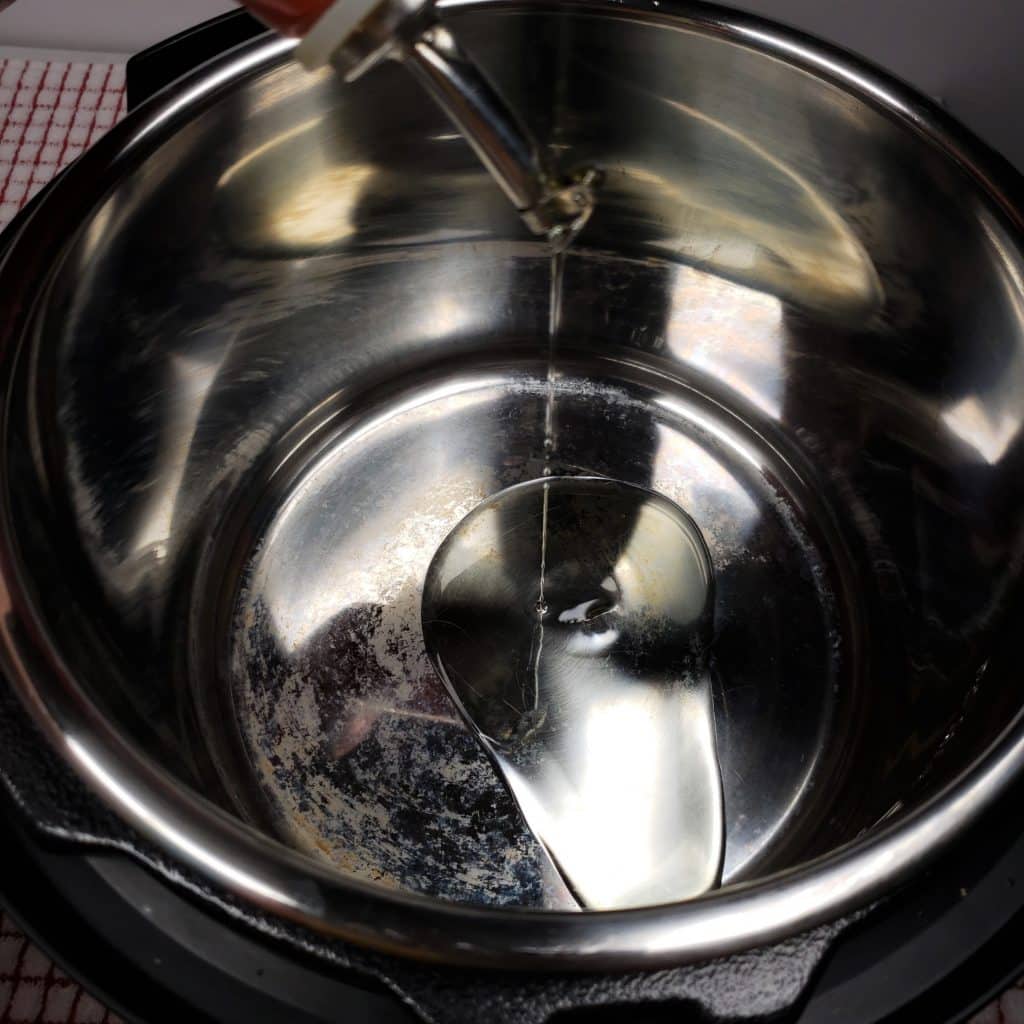 As usual with stainless steal cookware, you want to make sure the pot is nice and hot, before adding in the oil or fat.

My pot is not dirty. The bottoms get discolored and the lights are throwing shadows.

As this recipe is being quickly cooked in the Instant Pot, Mealthy MultiPot or Pressure Cooker, we’ll have to find another way to roast and impart a smokey flavor on the eggplant. 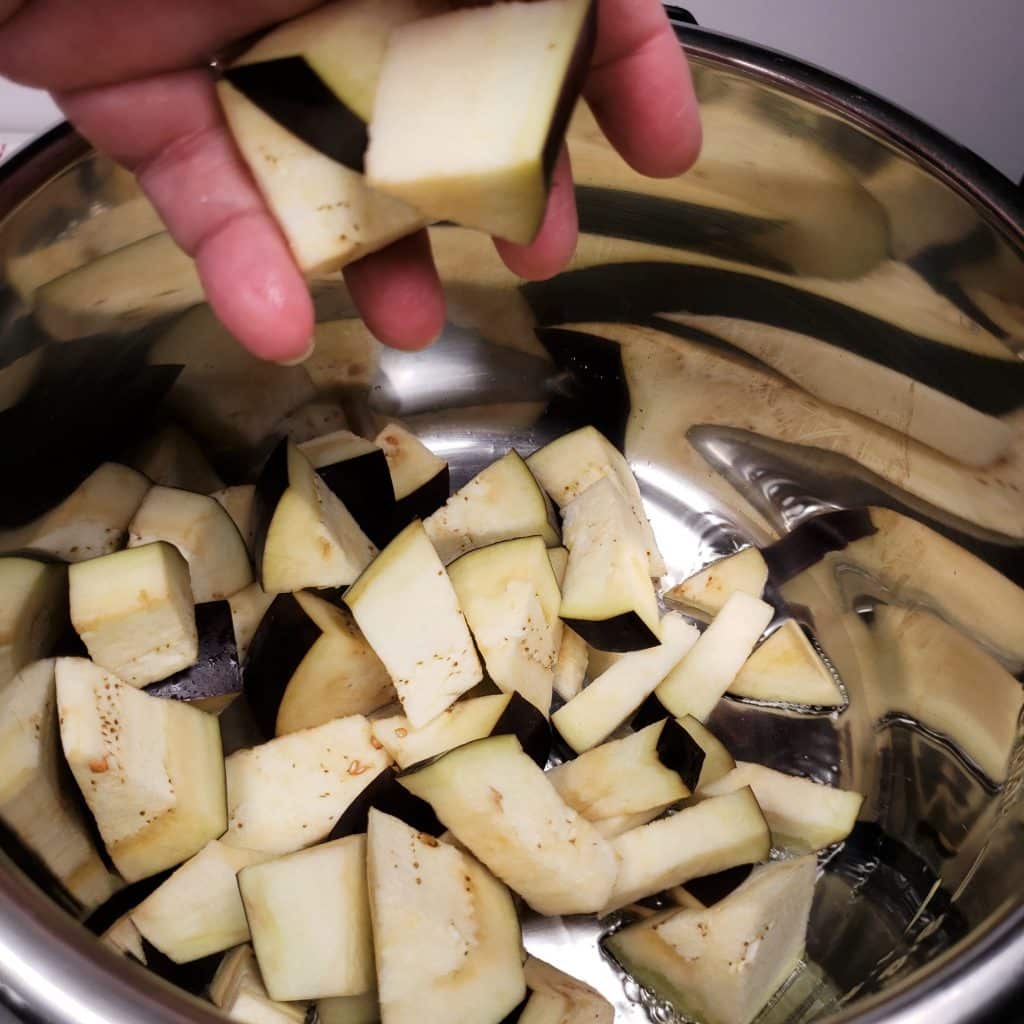 Eggplant Roast in the Hot Oil

After the eggplant is charred, the skin is removed. Since we are not actually charring the eggplant over an open fire, there is really no reason to peel the Eggplant.

The skin will become soft and it’s added nutrients, so, why not?

If you prefer to roast the veggies on the stove top or in the oven, that’s fine too.

But, this is a Pressure Cooker Baingan Bharta version and I wanted the entire dish to be very easy and totally done in the Instant Pot, Mealthy MultiPot or Pressure Cooker.

The Spices Roast Right Along with the Veggies

Smoked Paprika, while not a traditional ingredient, will bring some smokiness to the eggplant.

As the eggplant begins to cook in the oil, it will begin to brown and wilt.

I’m adding in some of the seasonings early, plus a couple of Bay leaves, to impart nice color and also add a nice flavor.

They will toast, right along with the eggplant.

This will prevent the Cumin Seeds from popping out and all over the place. Ground Cumin works also, but the seeds really add a nicer flavor and wonderful aroma! Buy them in small amounts, so that they are always fresh. 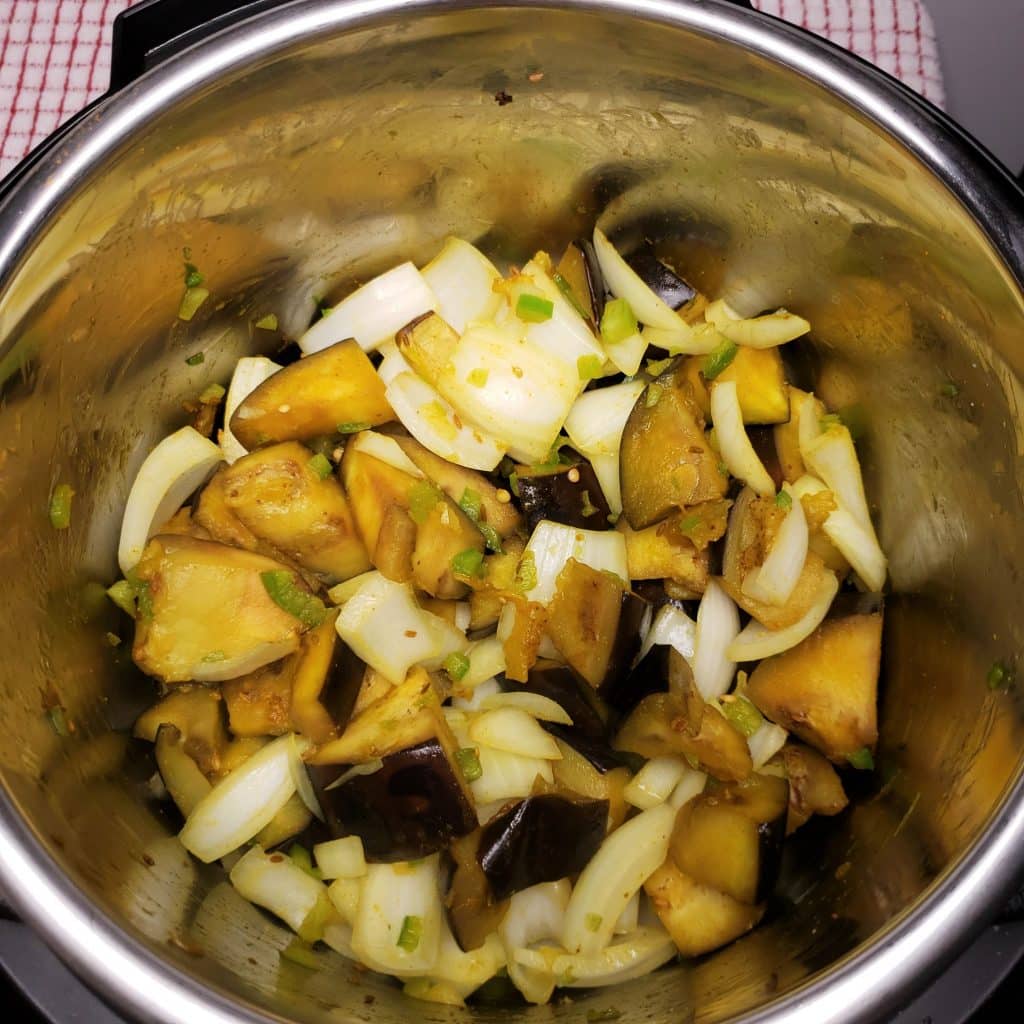 Any type of green chili pepper is fine to use.

Jalapeno, Anaheim, Serrano, all work. It is what determines the heat, so use whichever heat level you like.

For me, one Jalapeno is perfect. 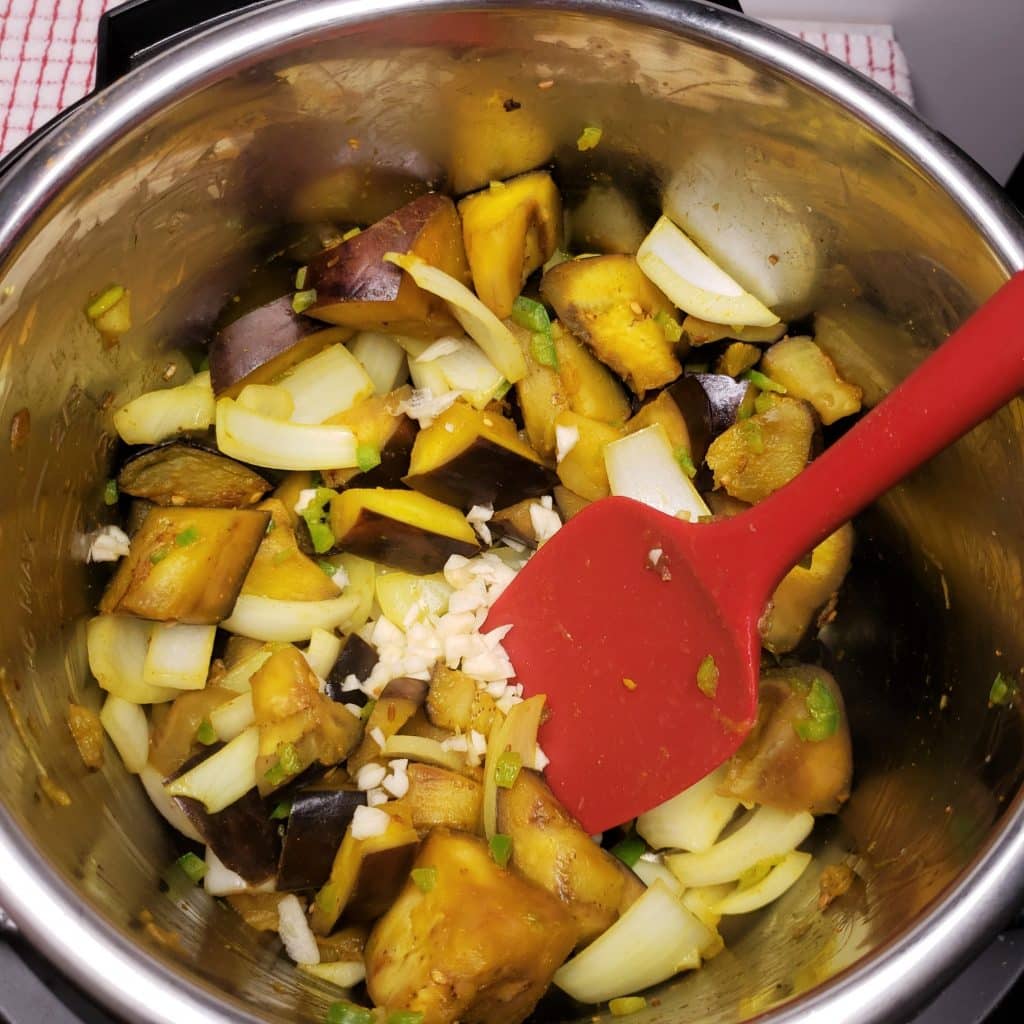 Ginger-Garlic Paste for a Brief Sauté

I’ve had Baingan Bharta with and without ginger.

While I love ginger, I think I prefer my Pressure Cooker Baingan Bharta without ginger. 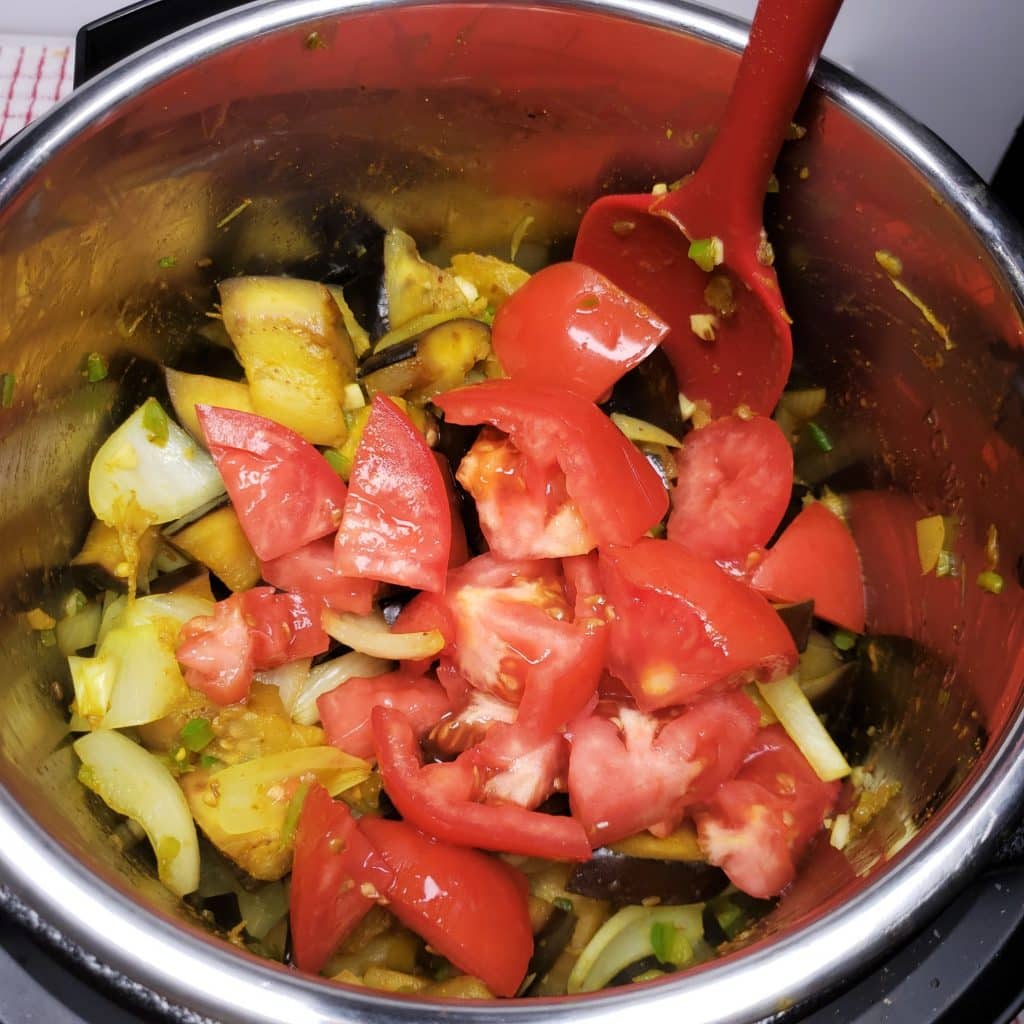 You will notice that there is no liquid in my recipe.

As the tomatoes begin to break down, they will release water, which will help to deglaze the cooking pot.

It also eliminates excessive liquid and prevents a long simmering down of the liquid after pressure is released!

The stove top method will easily cook down the liquid, but Instant Pot, Mealthy MultiPot or Pressure Cookers need some liquid in order to come to pressure.

Since we are not adding plain water the dish won’t be dilute at all and the Instant Pot, Mealthy MultiPot or Pressure Cooker will work its magic. 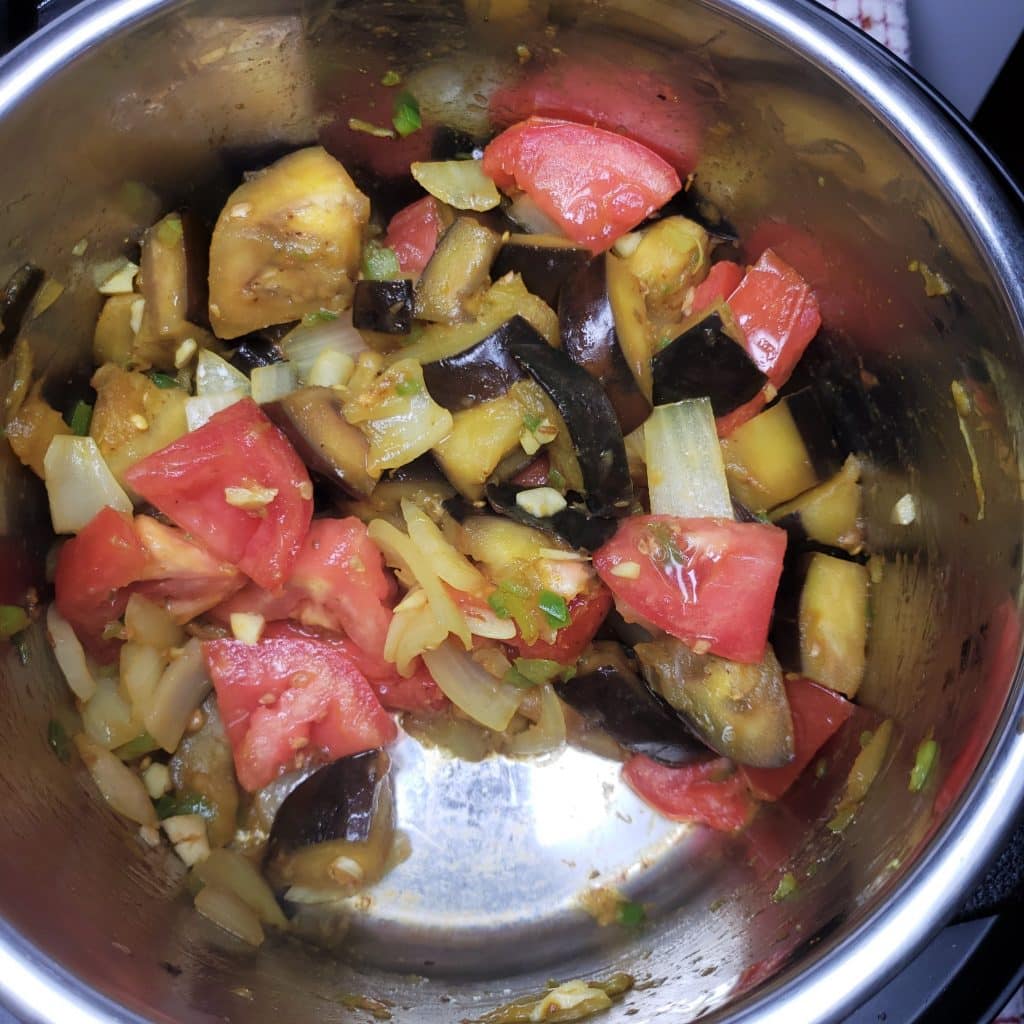 You wouldn’t have believed that just the tomatoes would remove all the stuck on bits on the bottom of the pot.

A good, high heat resistant spatula works to scrape the bottom of the cooking pot

More liquid will release as this Pressure Cooker Baingan Bharta cooks under pressure. 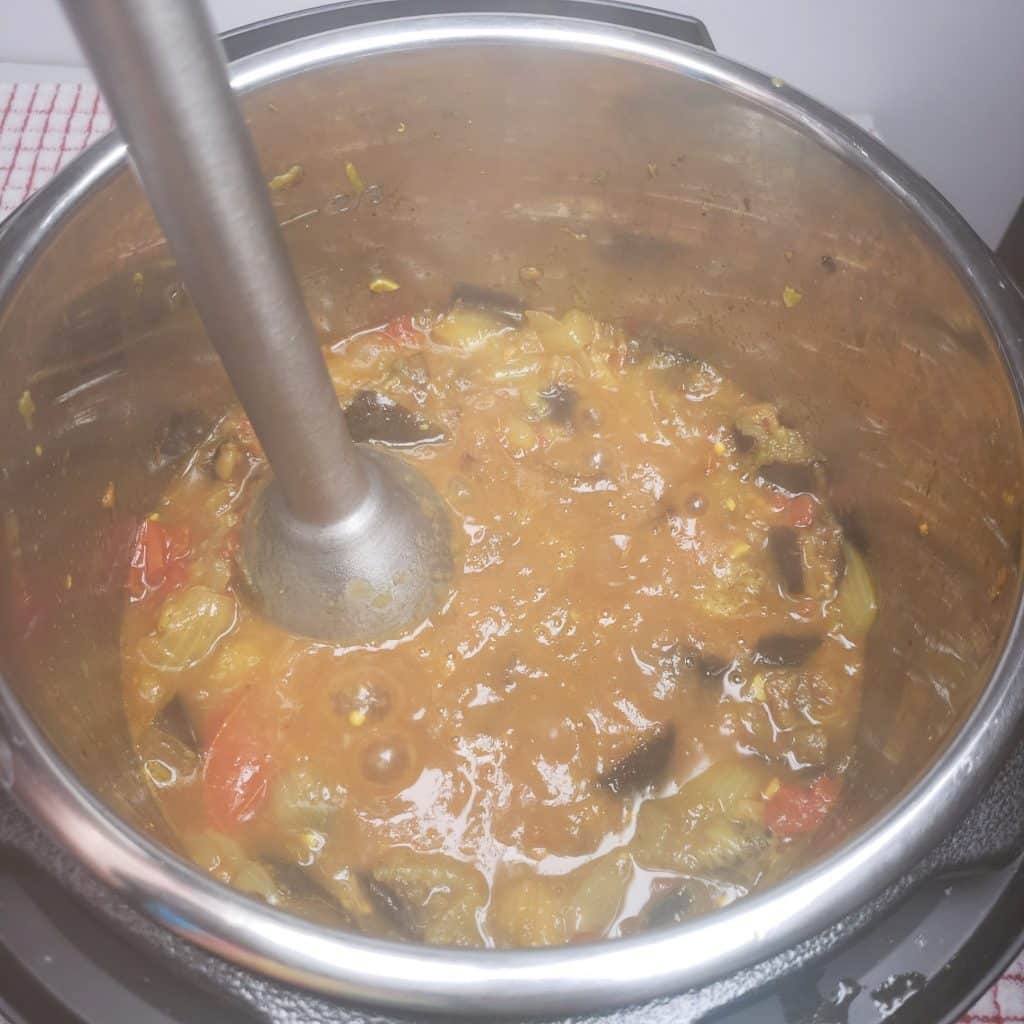 Use an Immersion Blender, but Leave Texture

You can smash the vegetables with a potato masher, if you like.

Or, use an Immersion Blender for a smoother consistency.

I like it very smashed, but with some texture. 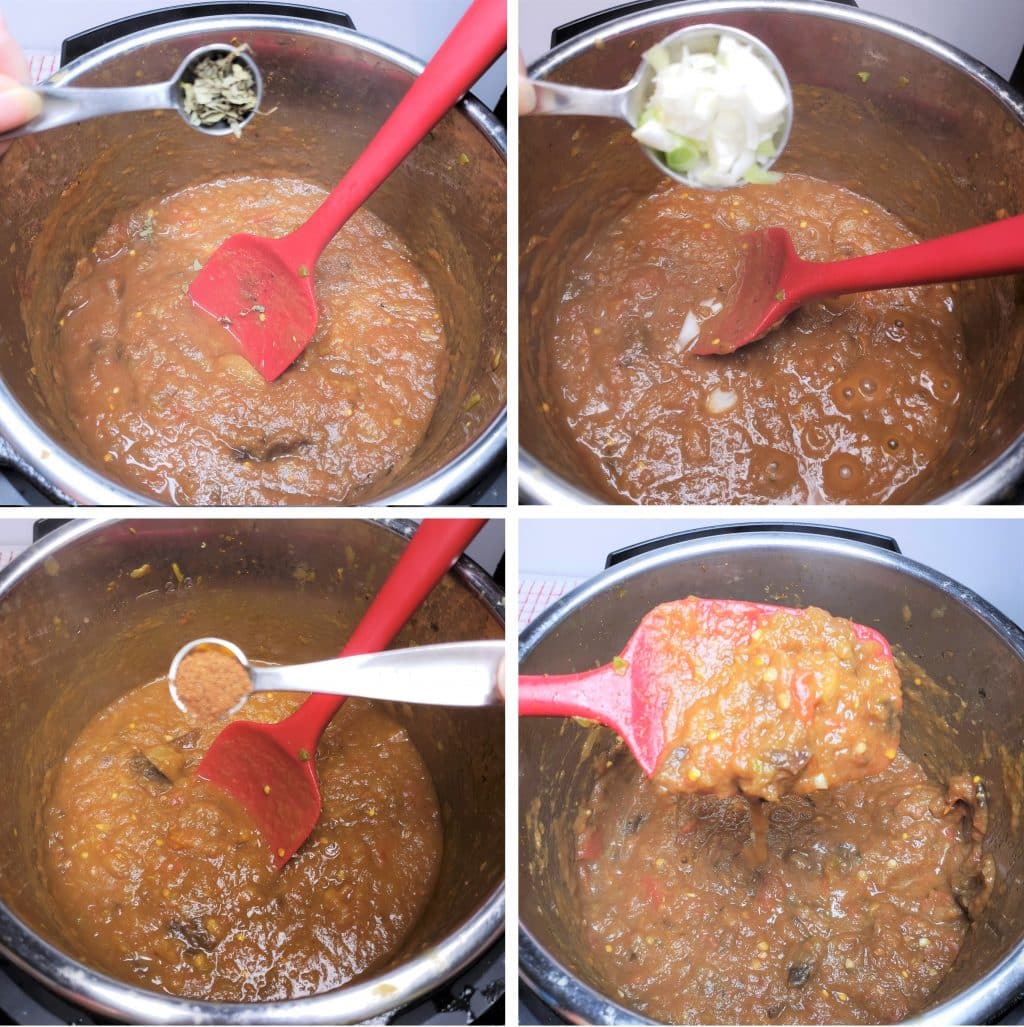 An optional ingredient is Kasuri Methi, which is Fenugreek.

I’ve always used it in Indian recipes, like in my Pressure Cooker Murgh Makhani, but if you don’t have it, don’t worry about it.

When cooking Indian dishes that calls for Garam Masala, you always want to save some to add it in right before serving.

Check your blend. If yours has all the spices, you don’t need to add additional Coriander or Bay Leaves to this recipe.

The bottom, white part of a scallion can be added in here if you like.

Sometimes onions are sweeter than other times and this batch of Baingan Bharta was a bit sweet for my taste, so I added some in at the end.

What goes with Baignan Bharta?

Give me a shout out on my instagram at #thisoldgalcooks, if you make this, as I love to see your photos.

Tried this recipe?Mention @ThisOldGalCooks or tag #thisoldgalcooks!
© ThisOldGal.com - Sharing the recipe link to this post is both encouraged and appreciated. Unauthorized use of this material, including, screen shots, copy/paste of full recipes to any social media site, website, copying into the copymethat app, cookbook, without written permission from Jill Selkowitz is strictly prohibited and in violation of our copyright protection. You may share a photo with a link back instead. 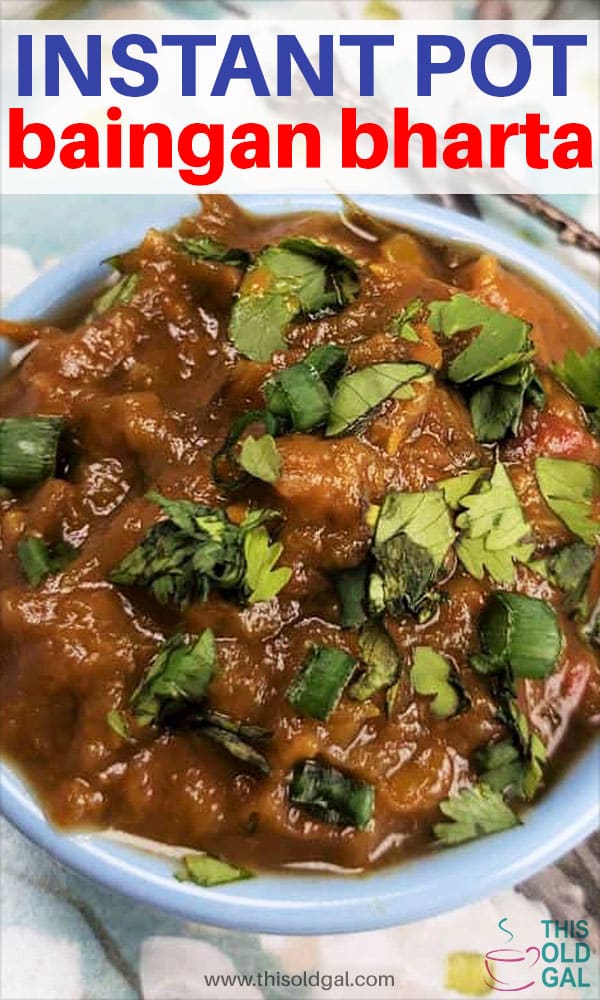 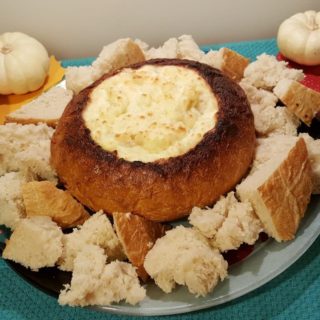