Pressure Cooker Gefilte Fish in Jelled Broth is made from Whitefish and Pike and simmered in a flavorful Homemade Fish Stock. 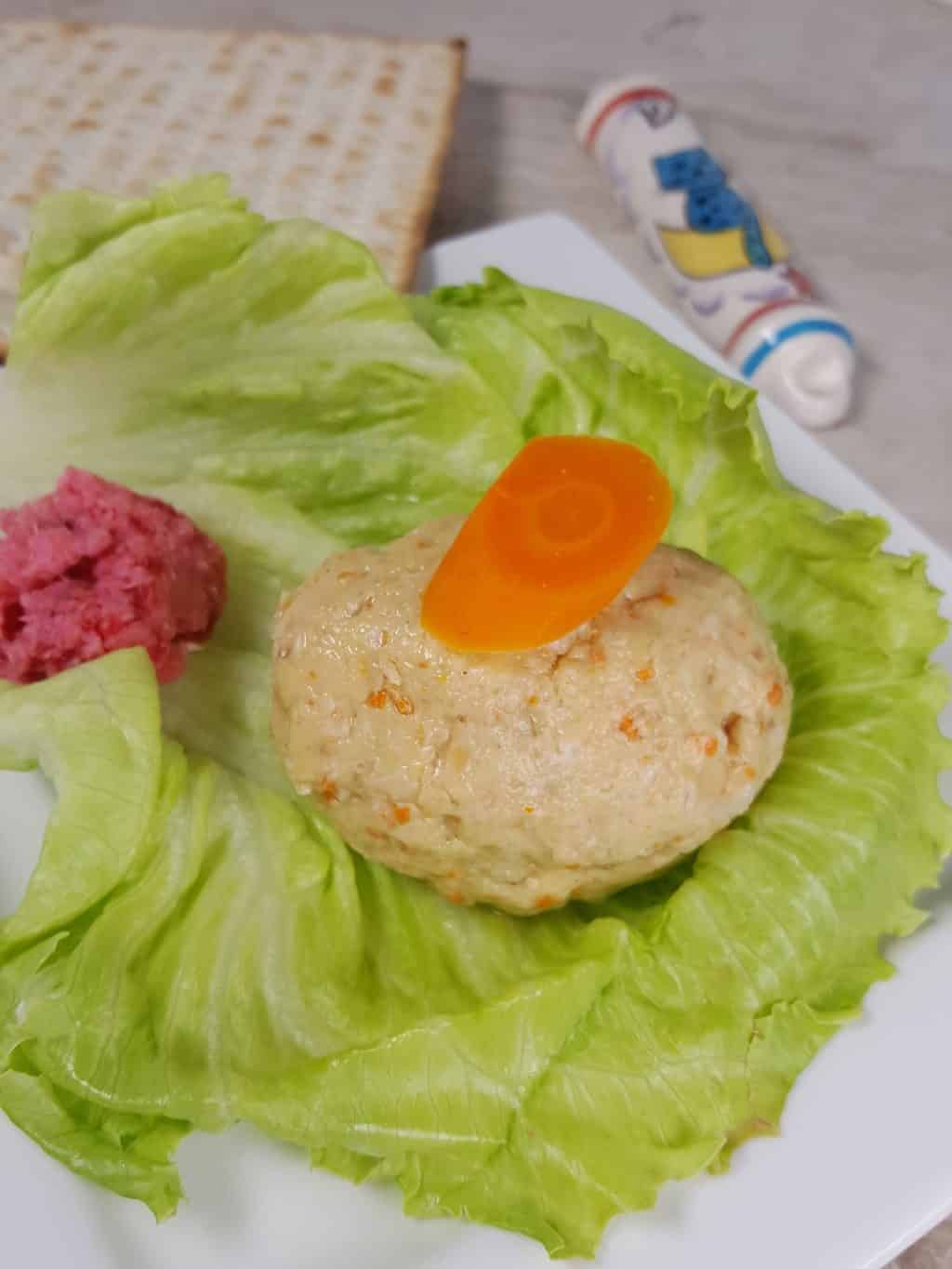 Every Passover, every Seder, the meal starts with an appetizer of Gefilte Fish.

Just one piece of fish on a lettuce leaf. One carrot on top. And a dollop of Beet Horseradish, or plain Horseradish.

I have converted my Grandmother’s Homemade Gefilte Fish recipe for the Instant Pot, Ninja Foodi or Pressure Cooker. My hope is that you will love this recipe and keep my Grandma’s recipe alive, for years to come.

One word of advice – make sure you get an extra Silicone Sealing Ring to use for this recipe!

What is Gefilte Fish? 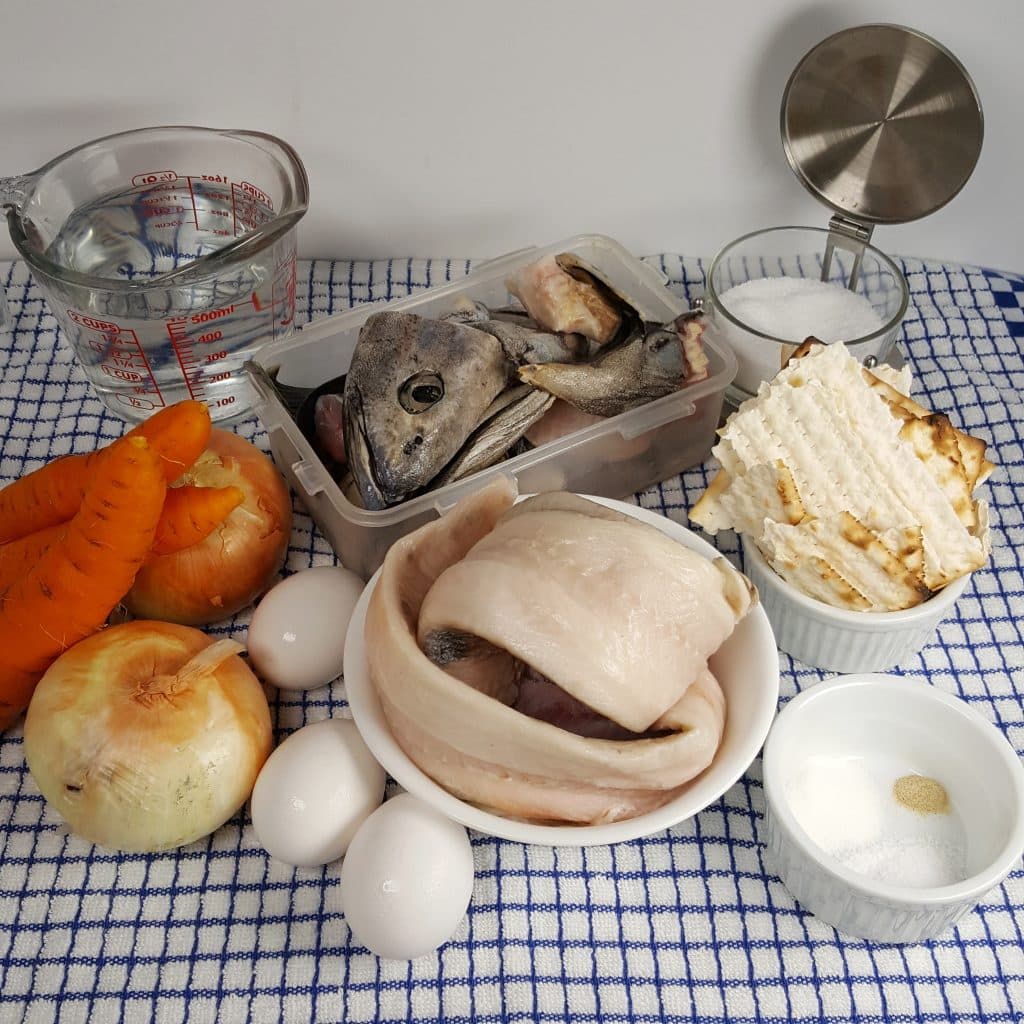 You may have to order your Whitefish and Pike in advance, as many fishmongers don’t keep this type of fish in stock.

You can also use Carp, Cod, Bass, Salmon, if you prefer a fishier taste.

If you are going to use Whitefish, make sure your Whitefish is Atlantic Whitefish from freshwater lakes in Nova Scotia, Canada.
There is another fish called Whitefish that comes from the ocean off of Mexico, which is an oily fish, so don’t confuse the two.

Jarred Gefilte Fish is pretty good really, but, you can totally customize your recipe, if you make it yourself. This Pressure Cooker Gefilte Fish is my very basic recipe and my preference is freshwater fish, Whitefish and Pike. 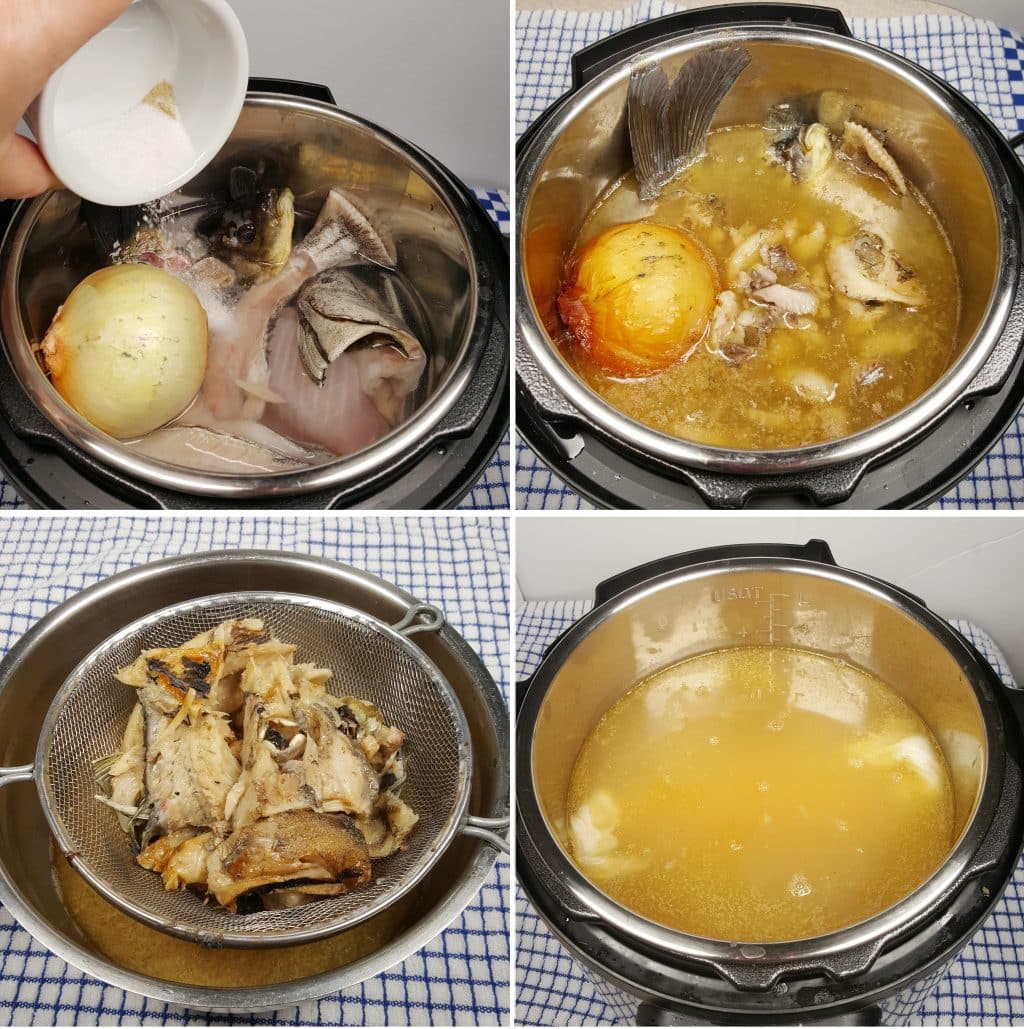 If your butcher did not clean your fish, you will need to do it yourself.

Be careful to make sure that all the bones are removed from the fillets.

All the trimmings, head, tail, bones, skin, will be used for the Fish Stock.

How do you make Fish Stock?

How do you strain Fish Stock? 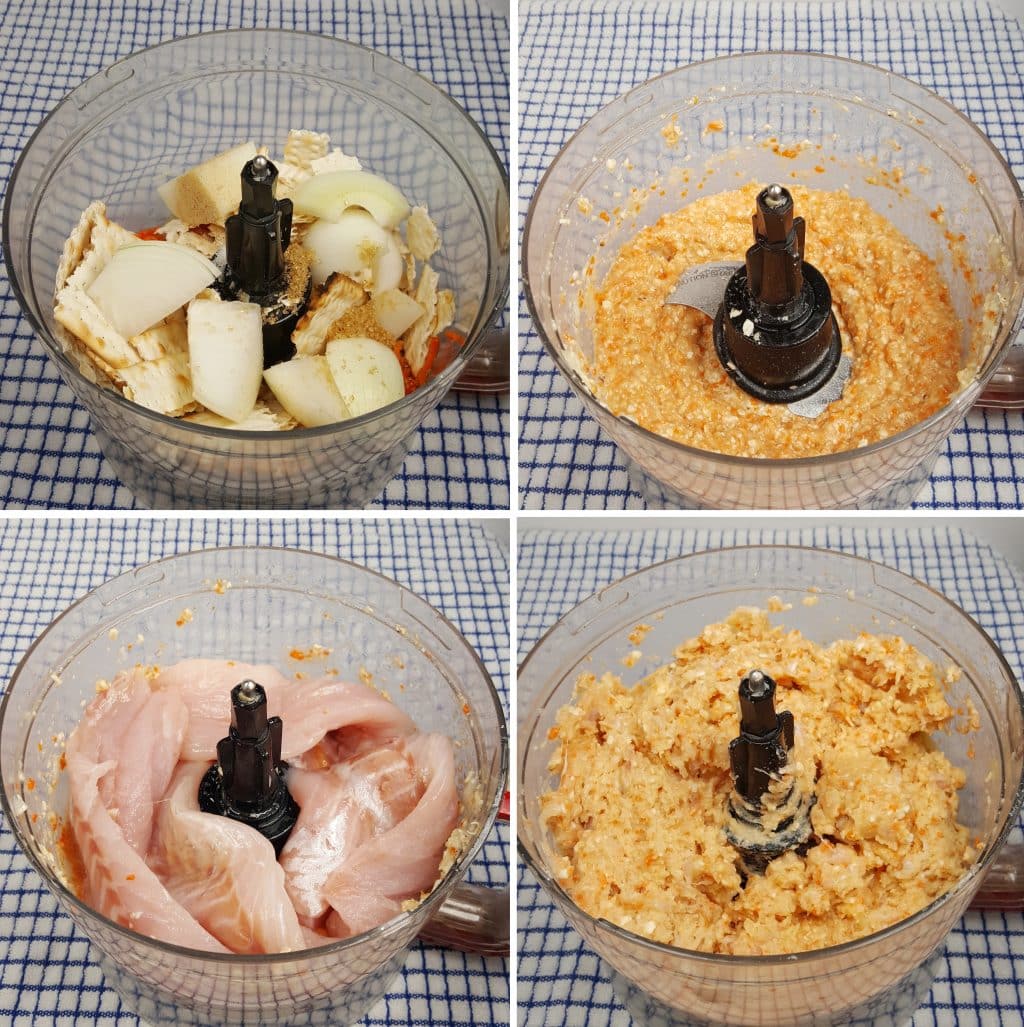 The easiest and quickest way to make your Pressure Cooker Gefilte Fish is to use a good Food Processor.

What ingredients are in Gefilte Fish?

Can Gefilte Be Made Gluten Free?

Make sure to first process all the ingredients, except for the fish, in the Food Processor.

Once the ingredients are well processed, add in the fish and process until just combined. Make sure not to over process the fish, as it will turn to mush.

You can change up the ingredients and fish, if you like, so if you like it sweeter, add more sugar.

If you like it less sweet, omit the sugar. 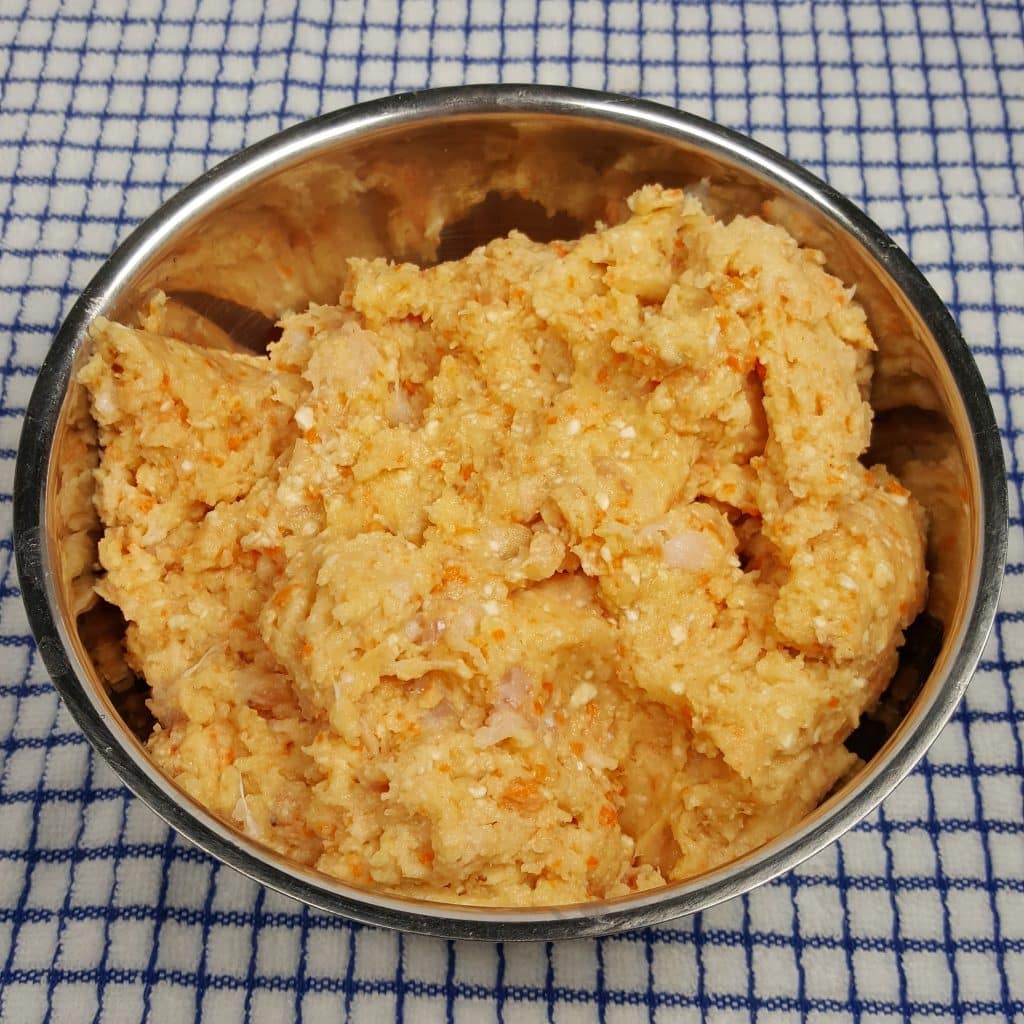 While the Fish Broth is cooking, place the Mixing Bowl with the Gefilte Fix Mixture into the refrigerator.

It is easier to shape when it is very cold.

That little Mixing Bowl above, is what I use for Pot in Pot to reheat leftovers like Macaroni and Cheese, Japanese Beef Stew, Seafood Chowder and more. 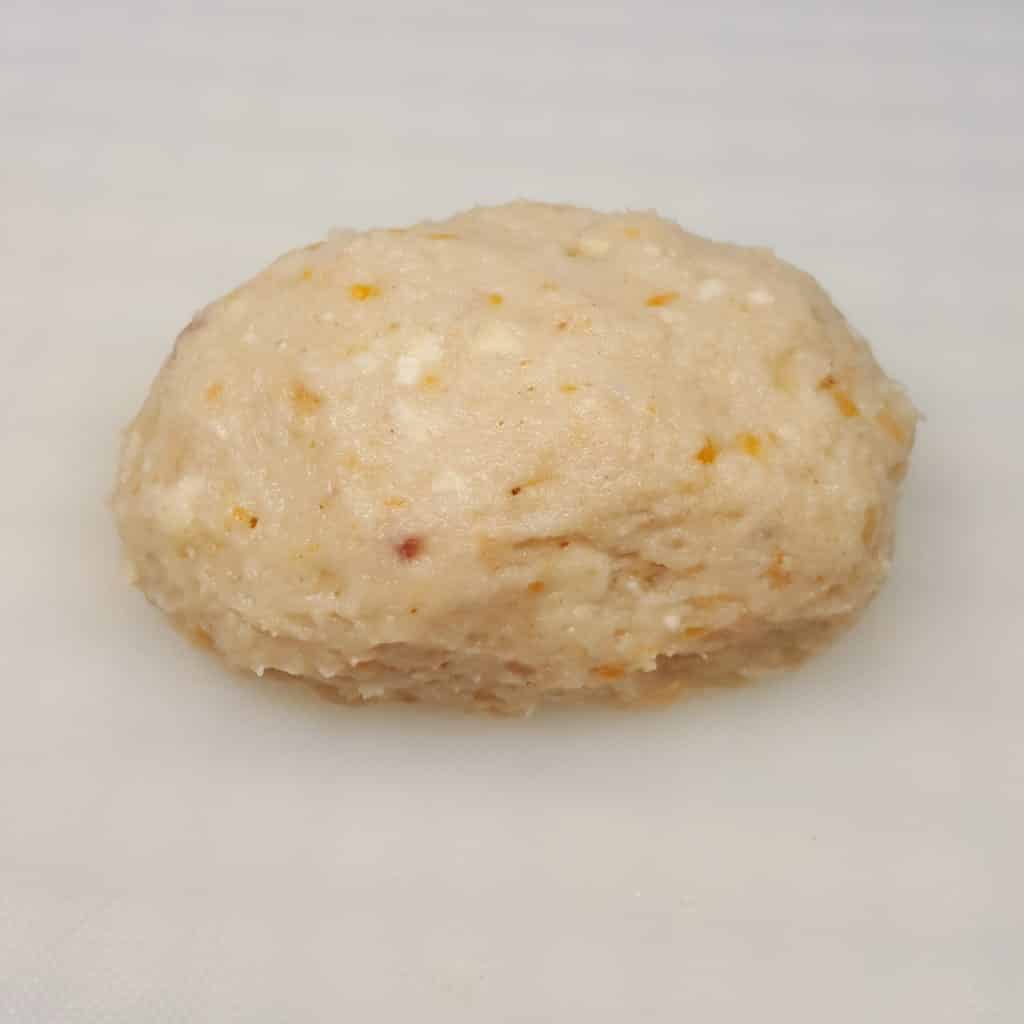 Form Mixture into an Oval Shape

After the Fish Broth has been strained, rinse out the cooking pot and pour the broth back into the pot.

Right away, Set the Pressure and Time on the Instant Pot, Ninja Foodi or Pressure Cooker.

Remove the Fish from the refrigerator and start shaping the Gefilte Fish Mixture into Balls. 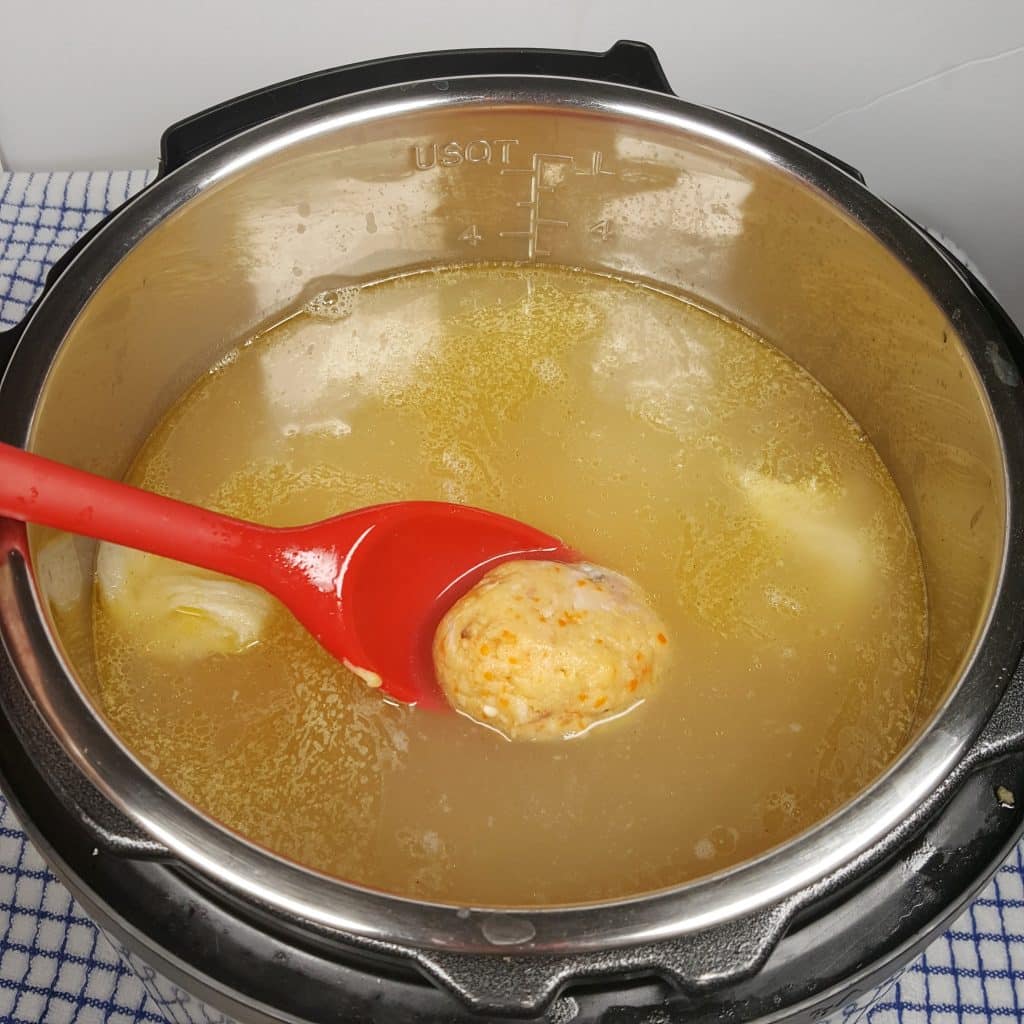 Don’t be scared about the Pressure Building up in the Pot. It won’t.

The Broth will just start to slightly simmer, or not, depending on how fast you shape the Gefilte Fish.

Use a Spoon or Spatula and slowly lower each piece of Gefilte Fish into the Hot Broth. 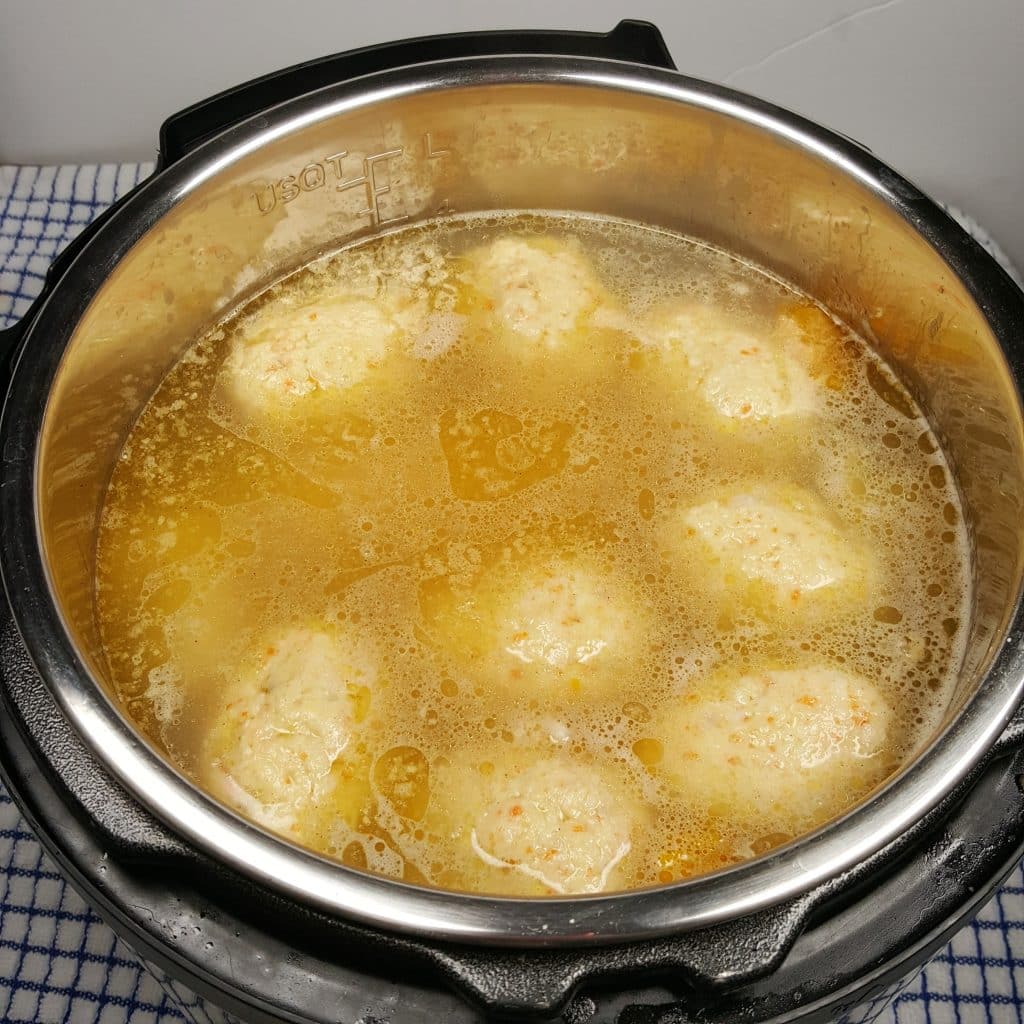 The Gefilte Fish will Float

The Pressure Cooker Gefilte Fish will begin to float. Continue to add the Fish Balls, until all of them are in the pot.

Throw the Sliced Carrots in at the last second.

I made Balls and a Log with this batch, so I could show you what’s what. 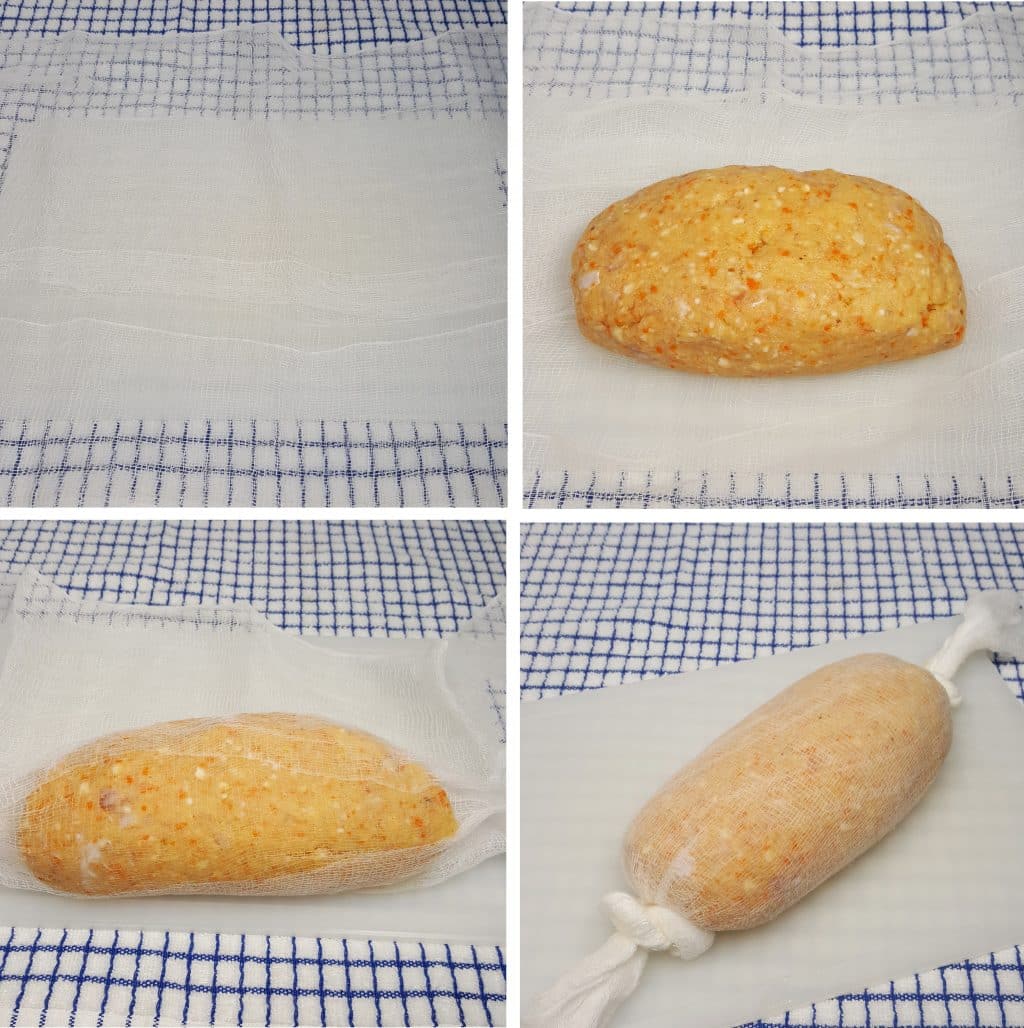 Here is how you can make your own Gefilte Fish Log and then freeze it for later.

How do you cook a Frozen Gefilte Fish Log?

You can also find Frozen Gefilte Fish Logs in the grocery store and cook them in the Pressure Cooker. 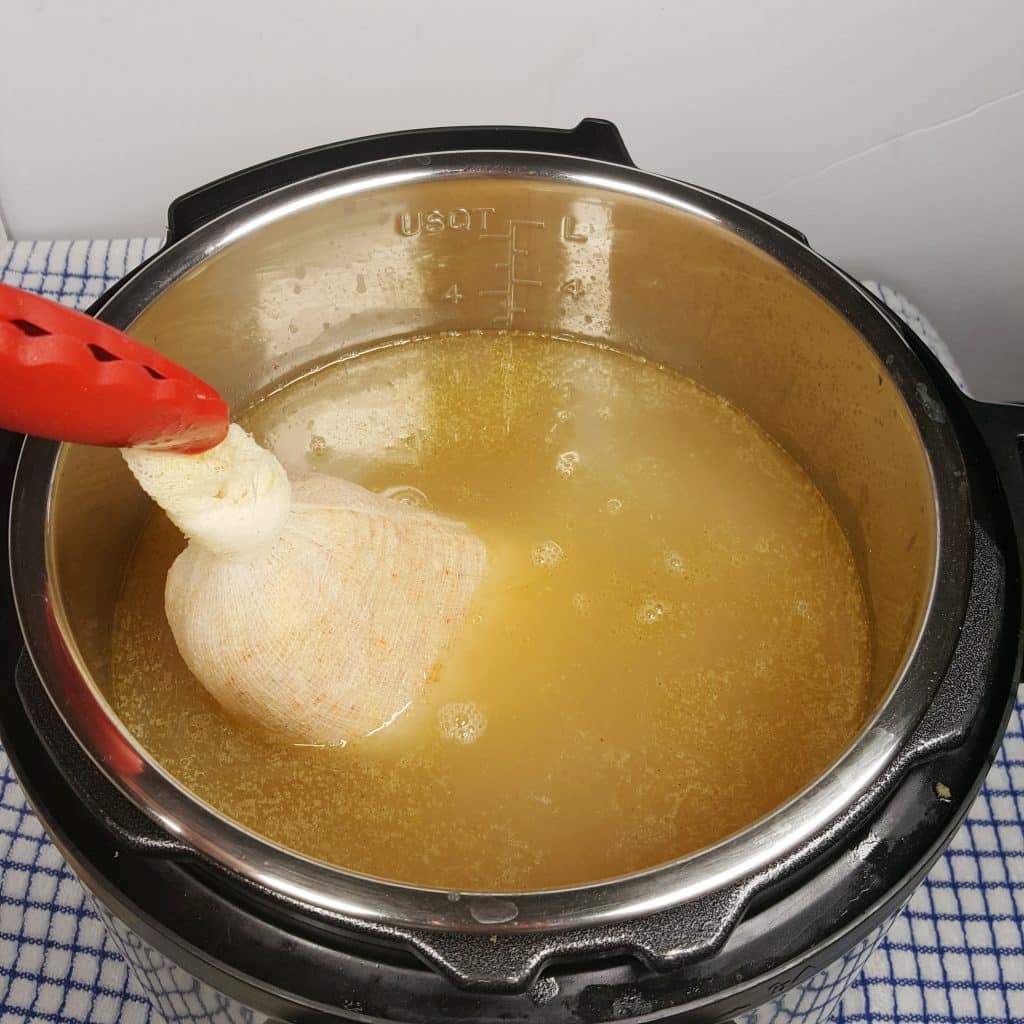 Grab a set of Tongs and gently lower the Fresh or Frozen Gefilte Log into the Hot Broth.

Be careful not to burn yourself….remember, the Pot is heating up since it was already set to cook. 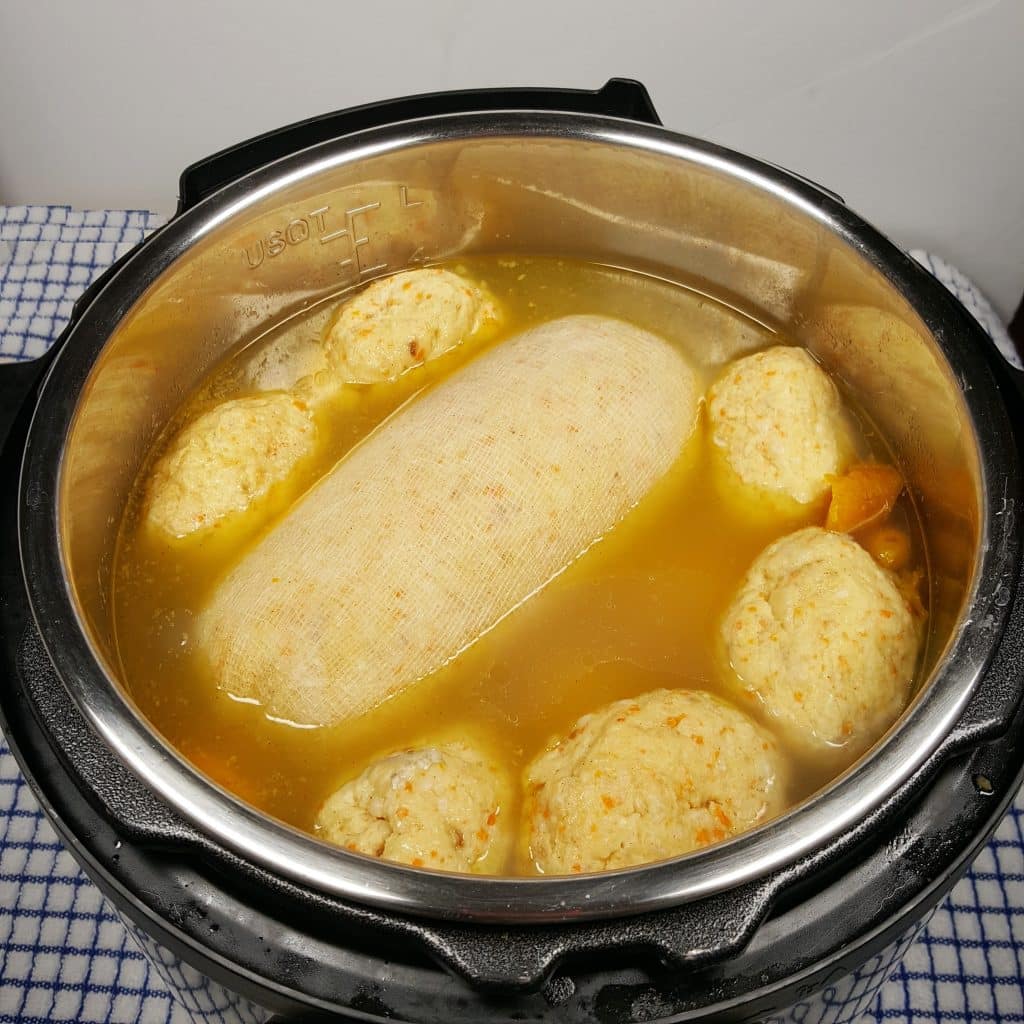 The Gefilte Fish will expand as they cook and then float to the top. 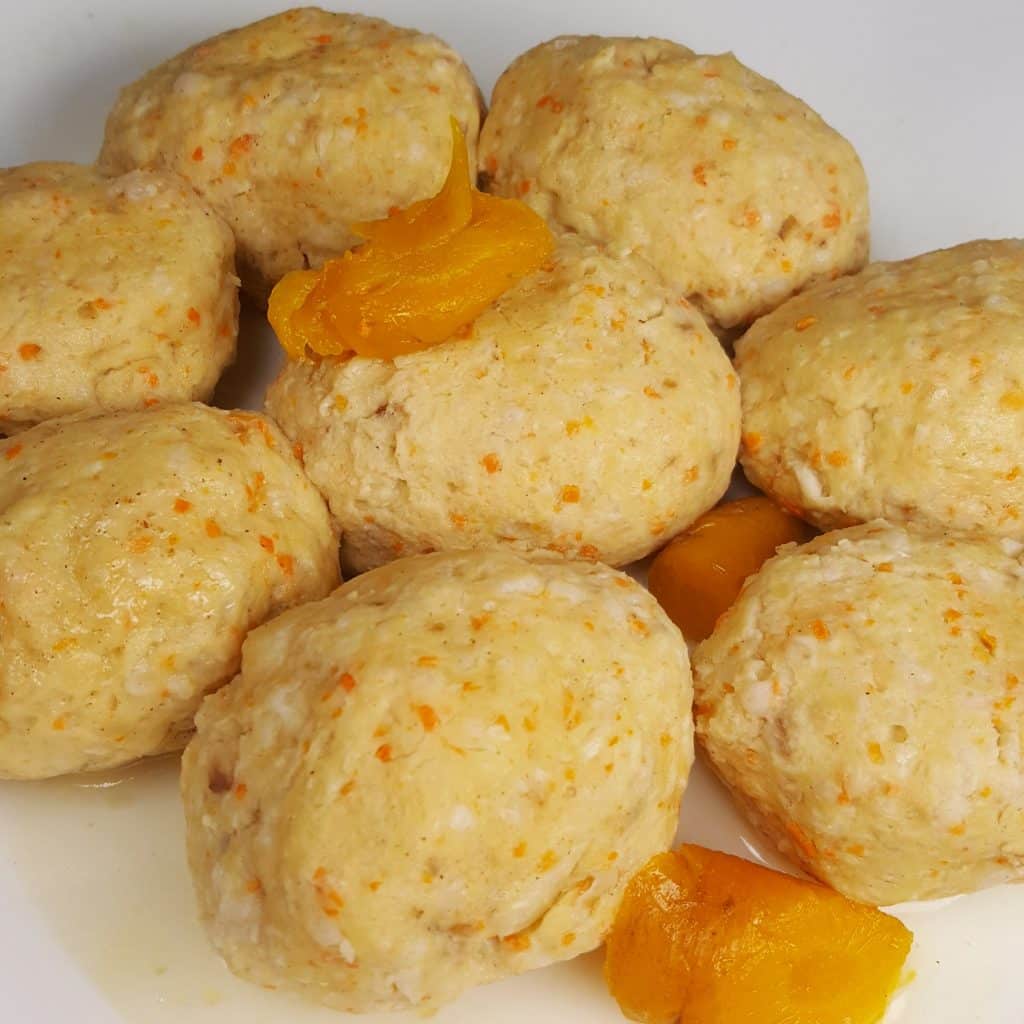 Remove the Fish from the Stock and place into containers to cool.

Cover with the Fish Stock and refrigerate.

The Broth will firm up and become jelled.

Serve your Pressure Cooker Gefilte Fish with a slice of carrot and a dollop of Beet Horseradish or Hot Horseradish.

Most people add some of the jelled Stock to the plate. I don’t like it, so I don’t put it on my plate.

Whitefish and Pike come from freshwater lakes in Nova Scotia, Canada and usually need to be ordered. Ask your fishmonger to clean the fish and separate the trimmings from the fillets. A good fishmonger will clean the fish thoroughly, but to be on the safe side, check to make sure no bones are left in the fillets.

Make it Low Carb and Gluten Free - use Potato Starch instead of Matzo Meal and omit the Sugar
Tried this recipe?Mention @ThisOldGalCooks or tag #thisoldgalcooks!
© ThisOldGal.com - Sharing the recipe link to any of my recipes posts are both encouraged and appreciated. Unauthorized and improperly attributed or non-attributed use of this material, including screen shots, copy/paste of full recipes to any social media site, website, mobile application or service (e.g., copymethat, recipe keeper, pepper) or cookbook, without the requisite attribution or otherwise with express written permission from Jill Selkowitz is strictly prohibited. You may share a photo with a link back instead.