Think of Instant Pot Noodle Kugel like a sweet baked egg and noodle pudding. Lots of noodles, cheese, sour cream, raisins and love and you’ve got the best Jewish Noodle Kugel you’ve ever made. 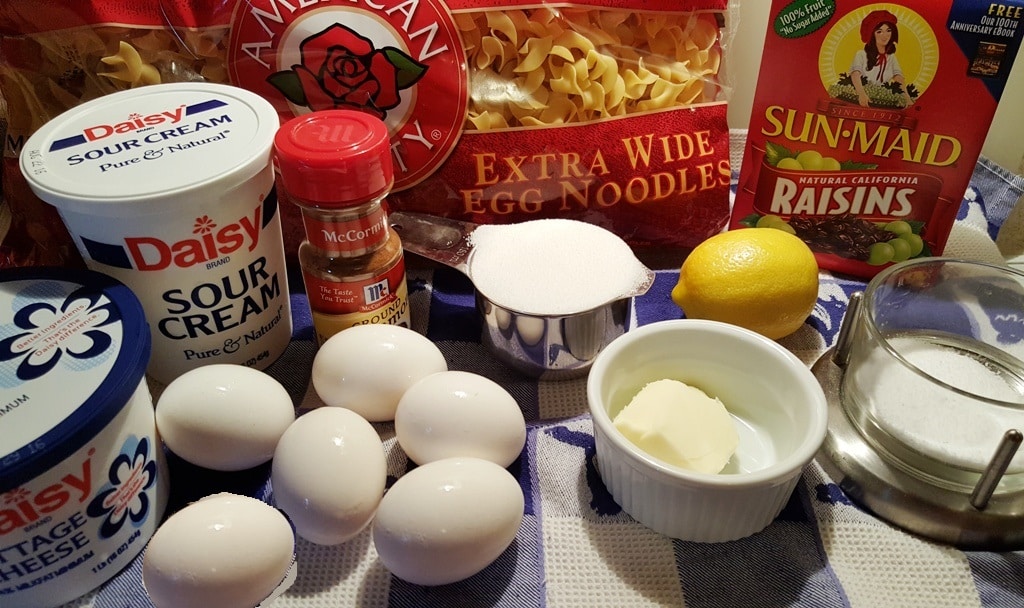 With my Grandma Rose’s Jewish Noodle Kugel being the greatest kugel on earth, I had to convert it to the Instant Pot, Ninja Foodi or Pressure Cooker and OMG, still this Sweet Baked Egg Pudding casserole is so delicious and still the GREATEST KUGEL ON EARTH! Lots of eggs, noodles, sweet cheese and raisins make Noodle Kugel a perfect side dish, snack and dessert. Perfect for pot lucks. Everyone always loves KUGEL.

What I love about the Pressure Cooker Jewish Noodle Kugel is that you can easily brown the top without ever turning on the oven just by using a Crisping Lid. Of course, if you prefer, go a head and pot the cooked kugel in the oven or in the air fryer and brown the top. 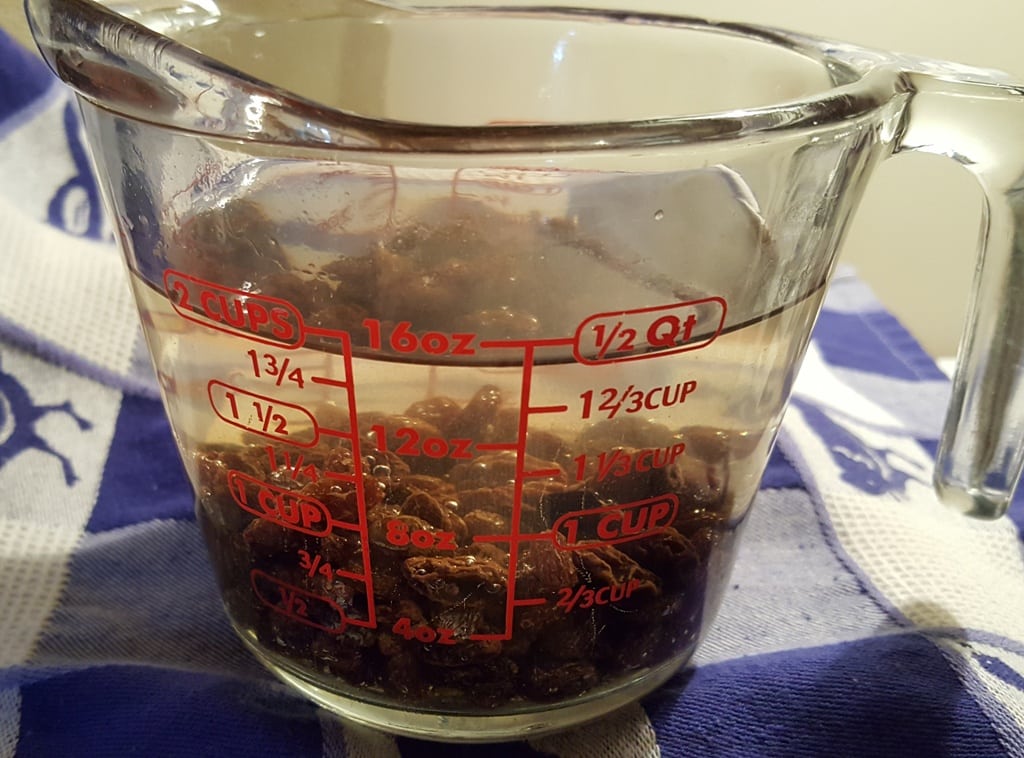 Soak Raisins in Water to Plump

If you do not want to soak the raisins, you do not have too. This is just a personal preference.

Both Black Raisins or Golden Raisins can be used at the same time. Other types of dried fruit can be used too!

Pro Tip: For an interesting twist, soak the raisins (or whichever dry fruit you are using) in some brandy instead of water.

Various Dried Fruit To Use

Whichever dried fruit you choose to use, the first thing is to soak the fruit/raisins in fresh water. The raisins will plump and be nice in the kugel as opposed to chewy and hard from baking.

Pro Tip: Don’t use candied fruit (you know, the kind you would use for a Christmas Holiday Fruitcake) when making kugel. It will be way too sweet. 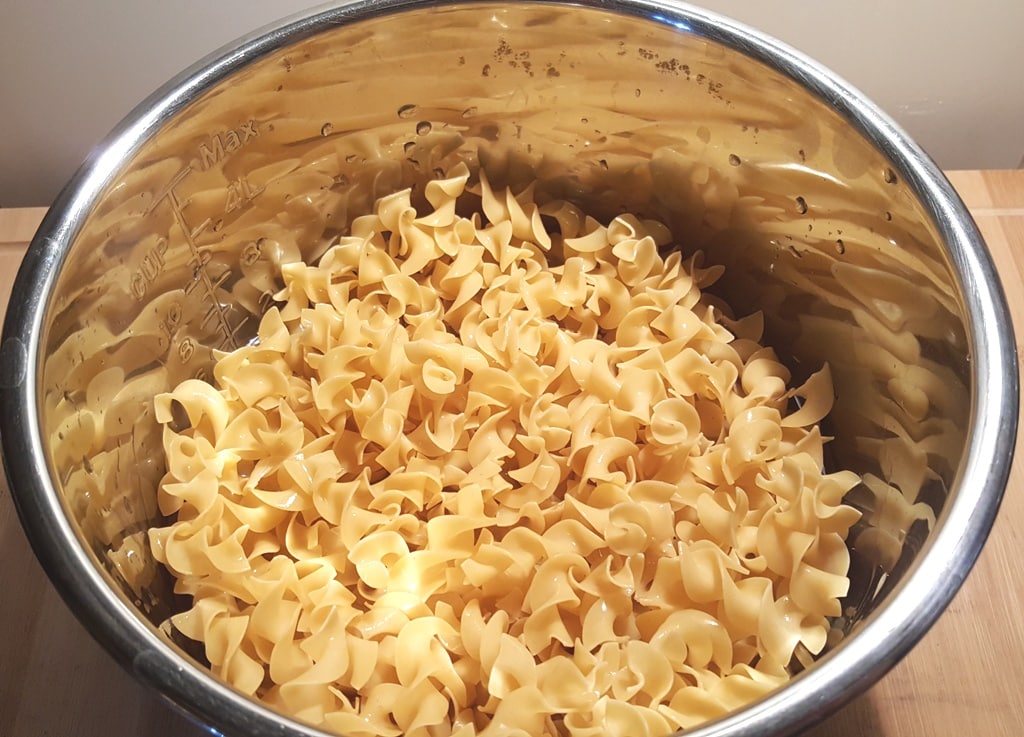 Add the pasta to the Instant Pot or Pressure Cooker

The egg noodles will cook super fast, so don’t leave the kitchen.

To avoid the sputtering that sometimes happens when doing a quick release, use short, intermittent movements to release a little steam at a time.

Pro Tip: Running the cooked noodles under cold water will stop the cooking process. They need to be al dente since they are going back into the pressure cooker.

Diabetics and those watching their carbohydrate and sugar intake, you could make a more diabetic friendly option.

Pro Tip: Cottage cheese still has some carbs, so please check the nutrition and eat according to your personal requirements.

I use a Cuisinart Electric Hand Mixer as it is so easy to just mix all the ingredients together and get them blended really well.

For all you who love to beat your eggs hard in my Pressure Cooker New York Cheesecake recipe, which you shouldn’t, here is your chance!! Hahahahaha. 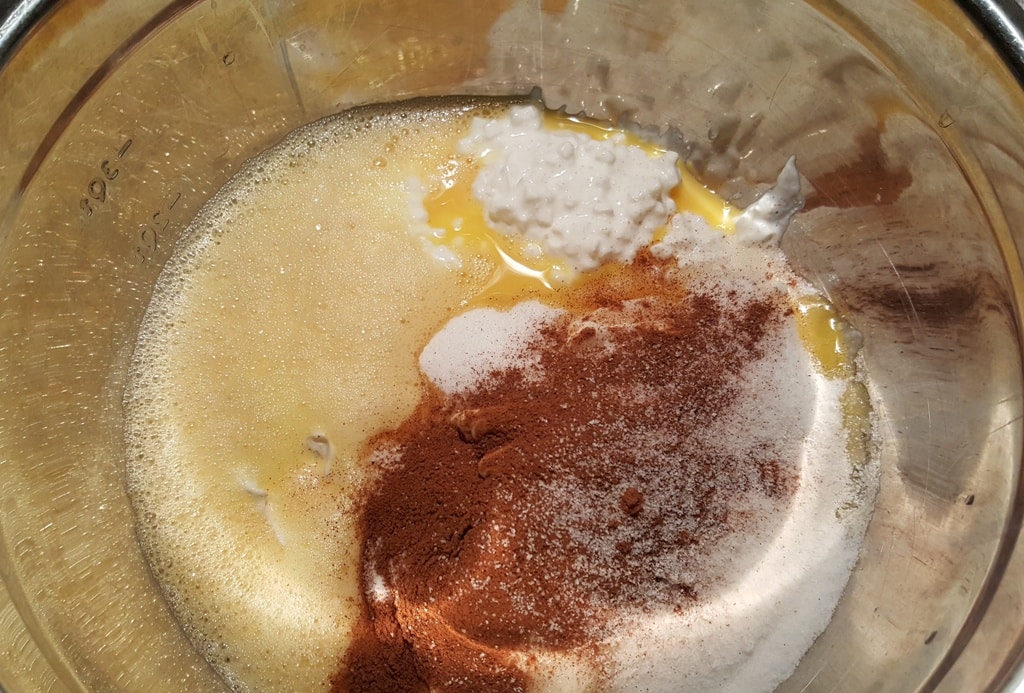 Add in the cottage cheese, sour cream, cinnamon, sugar, lemon juice and the rest of the ingredients to the Large Mixing Bowl and beat it really well so that there are no chunks of cottage cheese. 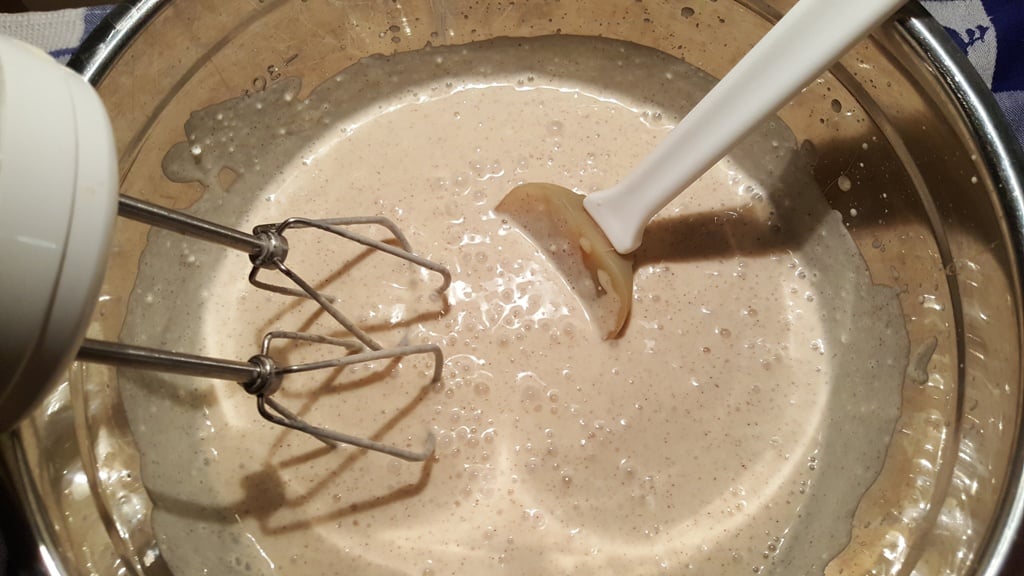 Beat the filing until smooth!

You will want a nice and smooth consistency. 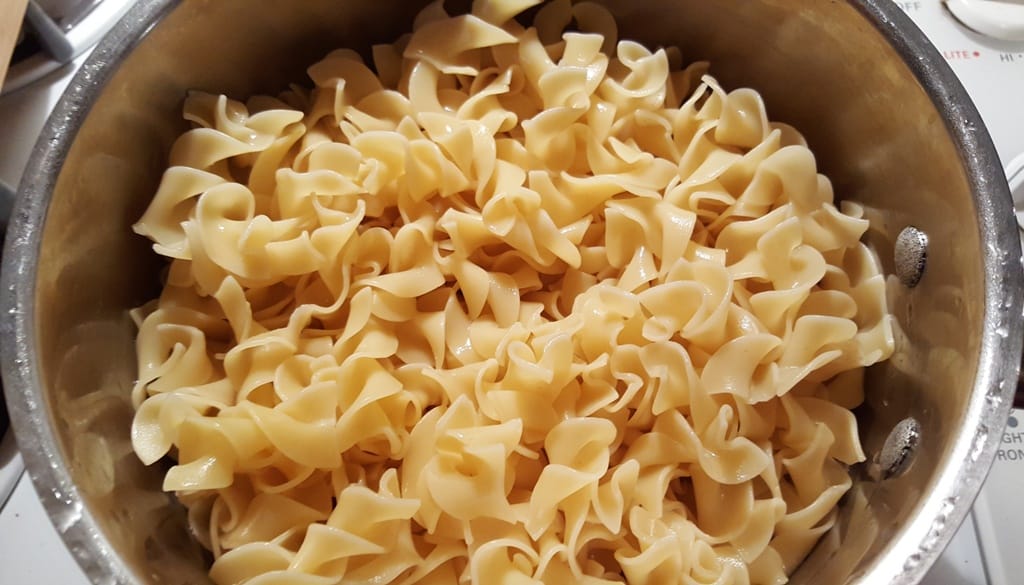 By this time the noodles should be finished cooking. Drain the water and run the noodles under cold water. 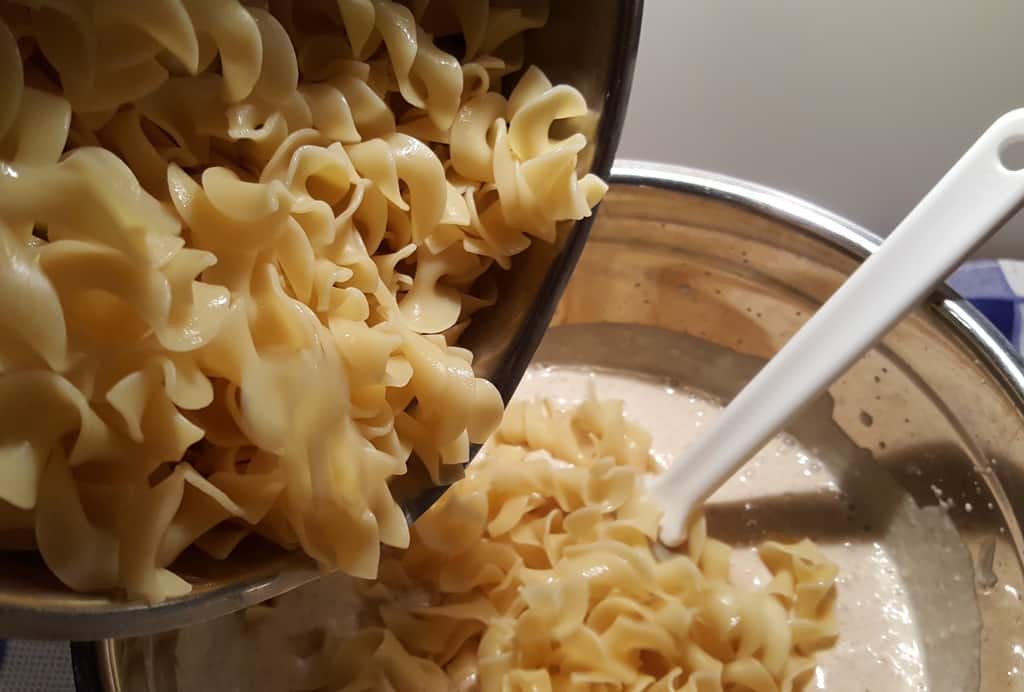 Dump in the Egg Noodles into Filling Mixture

Gently fold the noodles into the Large Mixing Bowl with the cottage cheese mixture and combine well. 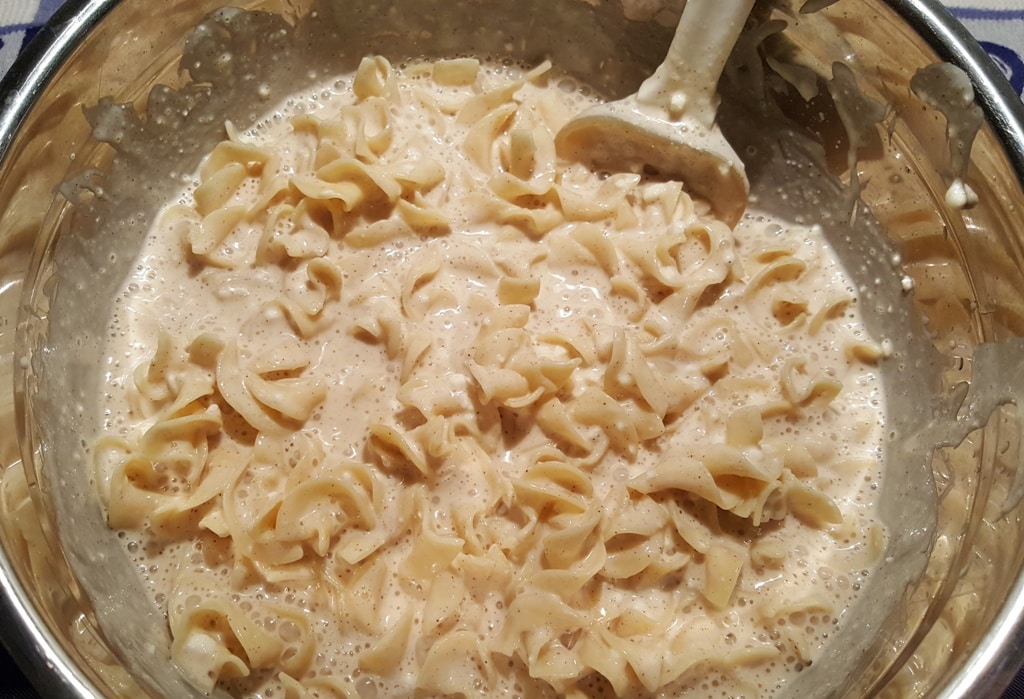 Gently make sure all noodles are coated with the luscious filling

Can Other Noodles Be Used?

Another wonderful recipe to bring to a potluck is my Chocolate Chip Coffee Cake, which is to die for…..really! 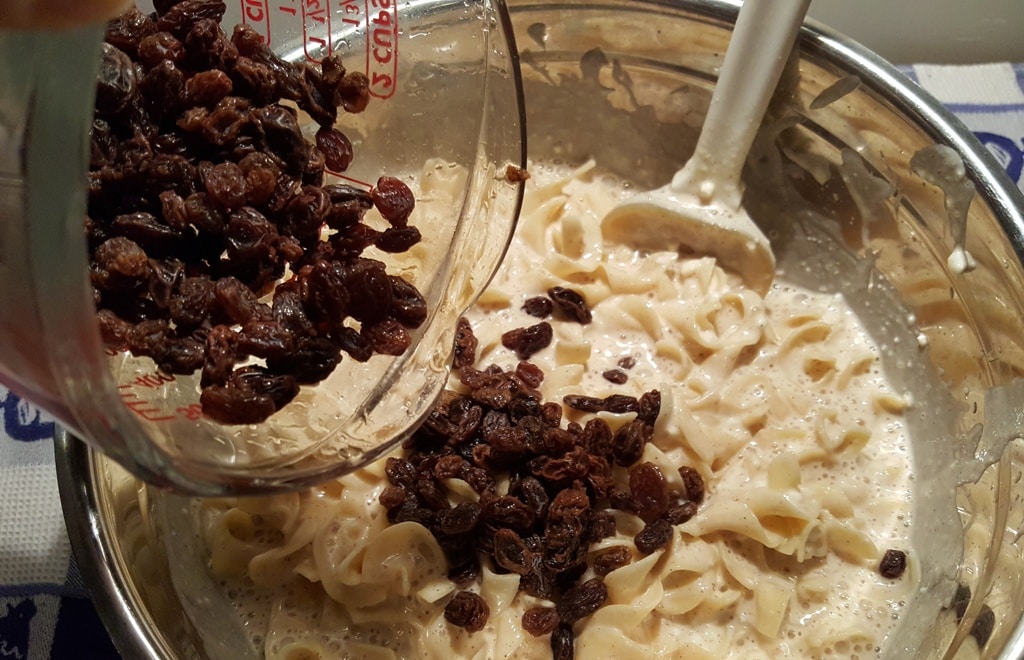 There are other fruit variations too. Using canned and fresh fruit gives the Instant Pot Jewish Noodle Kugel a different texture. Dried fruit has a chew to it, but fresh and canned fruit will generally blend in with the cheese mixture. It kinds of reminds me a fruit blintz.

Pro Tip: Fresh and canned fruit may not be as sweet and the sweetness (sugar) may need to be adjusted. 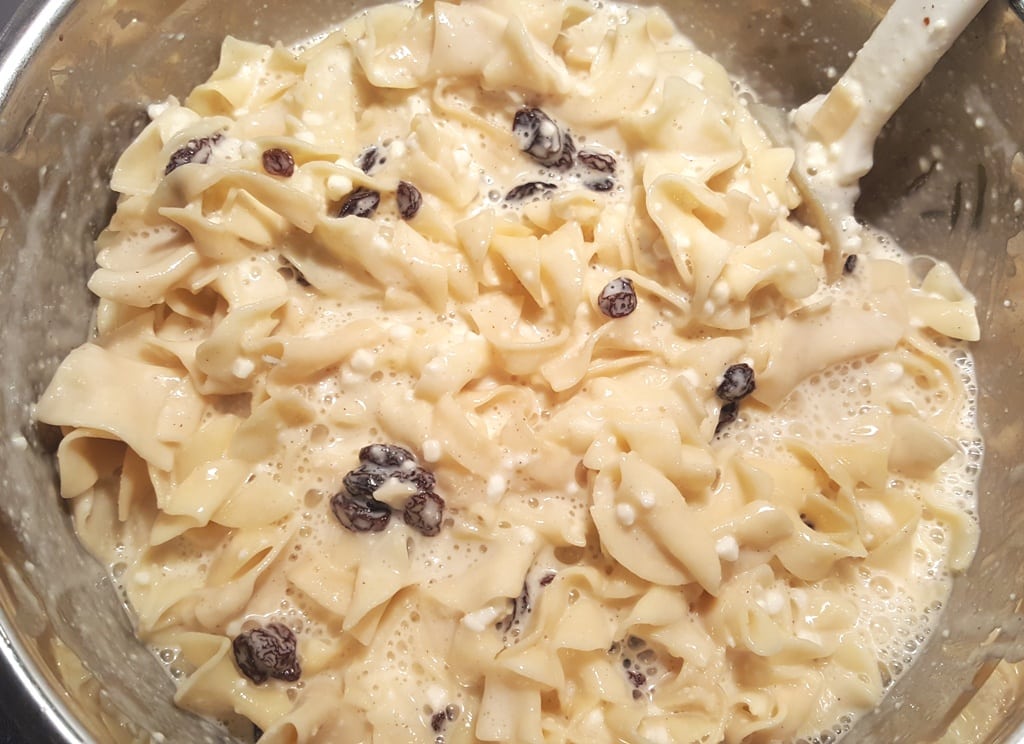 Gently fold in the raisins

Kugel is a Jewish dish, but so many of my friends who are not Jewish, use this dish for Christmas dinner. I have seen them use Santa shaped pasta and cranberries!

Pour half the mixture into the Push Pan

Generously, butter your Push Pan so that the kugel will easily release.

Since the posting of this recipe, I have switched to using this cake push pan with handles. It makes is to easy to get the pan in and out of the pressure cooker.

Pro Tip: DO NOT USE PARCHMENT ROUNDS for the Kugel. While Parchment Rounds are great when making cheesecake, it is not for making Kugel, as it will adhere and become one with the Kugel. Trust me on this! Don’t do it.

This is how the noodle kugel looks right out of the pressure cooker. Because I love the crispy top, here is what you do to make it nice and brown and crispy as if baked in the oven. 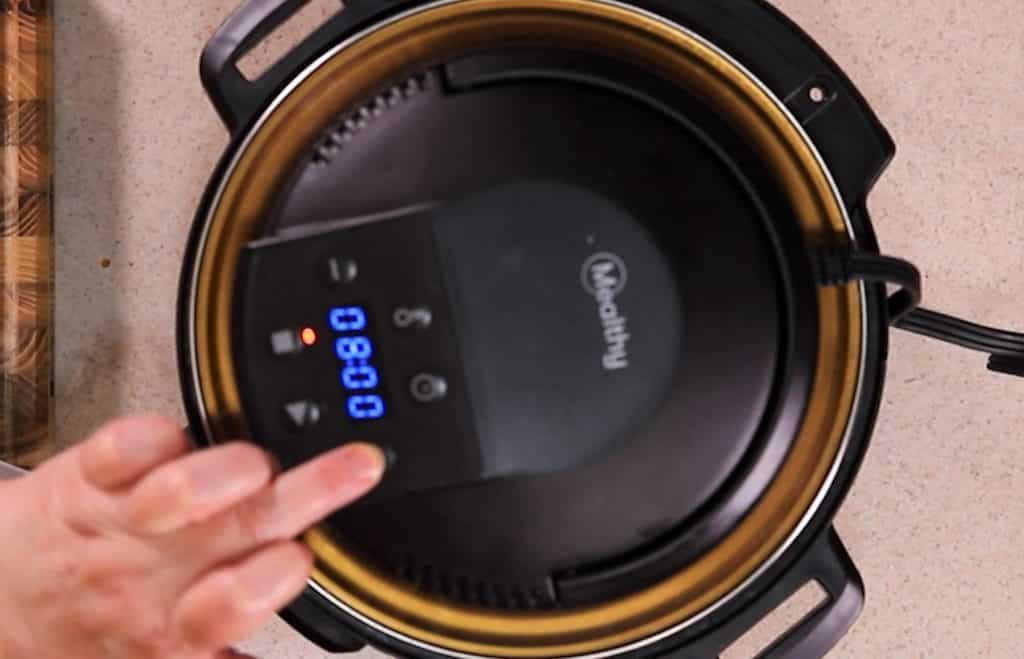 Place the CrispLid on top of the Instant Pot 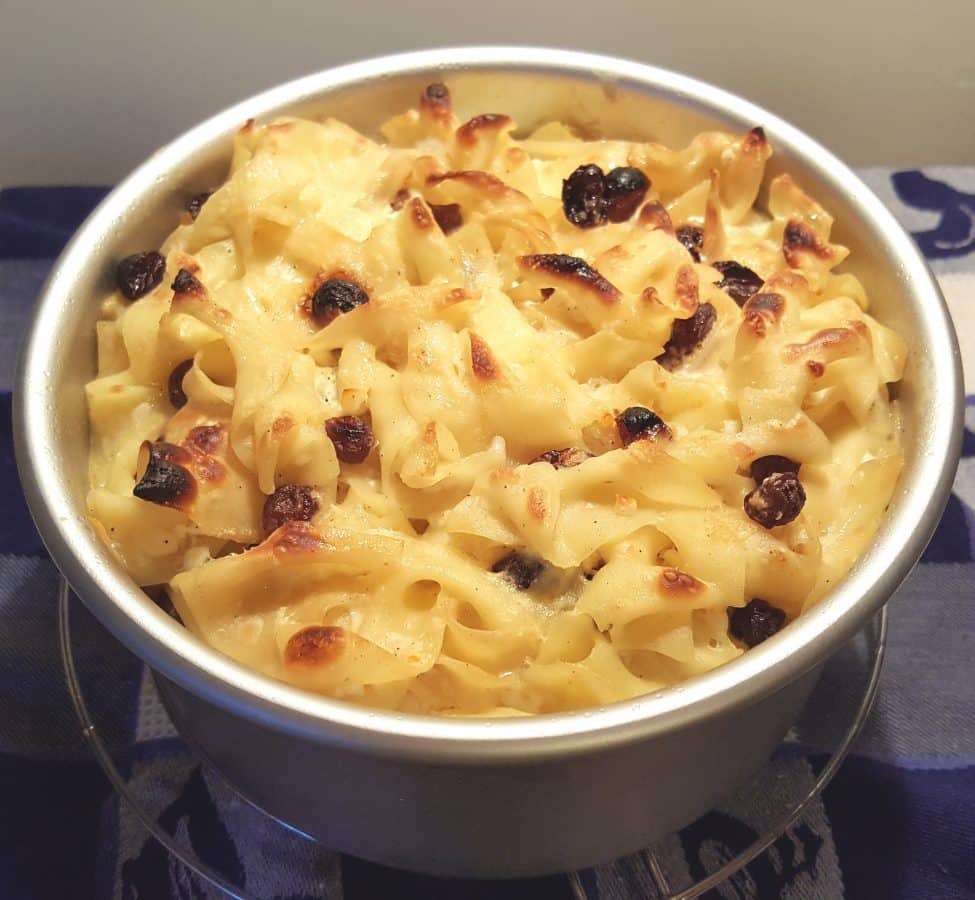 Alternatively, you can put the Instant Pot Noodle Kugel under the broiler or use an air fryer to broth the top.

My preference is not adding the cornflake topping, but most people LOVE the topping, so try it both ways and see which you prefer. 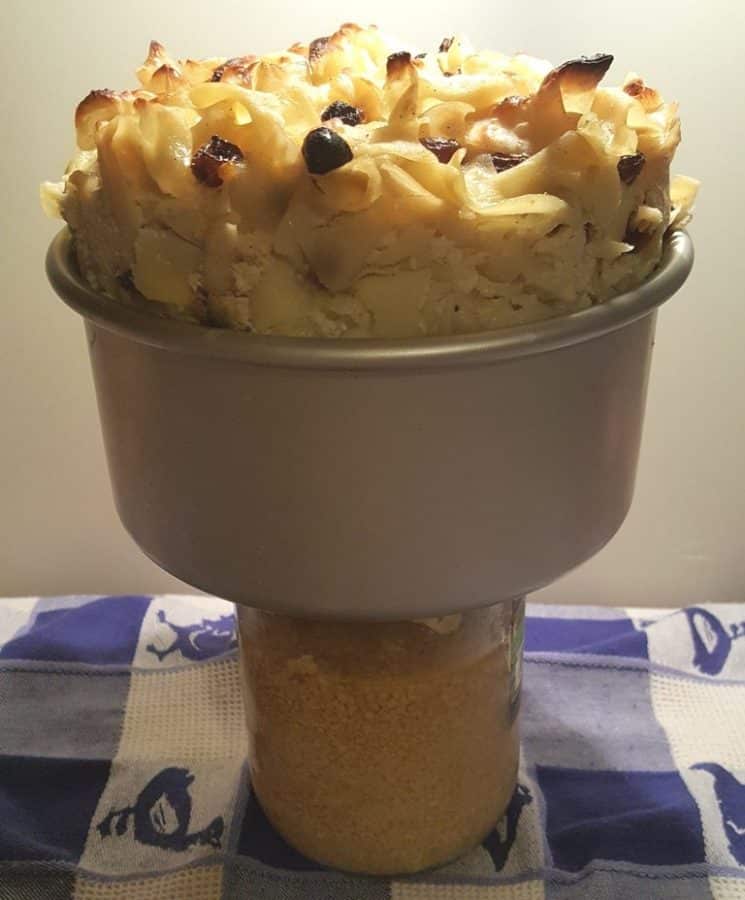 How to Eat Jewish Noodle Kugel

Pro Tip: You can also make Kugel the day before and refrigerate it to serve with your meal.

How to Remove Kugel from Pan

Bring Instant Pot Noodle Kugel to a buffets or to a BBQ. It is also great as desert or just for a snack. It is a great “make a head” dish!

Various Dried Fruit Can Be Used

Running cold water over the cooked noodles will stop the cooking process, so that the noodles do not become over cooked during pressure cooking of the kugel. After the Instant Pot Noodle Kugel is "baked" you will want to give the top a nice browning so that some of the noodles turn brown. The crispy part on top is the best! If you want the cornflake topping, add it now and then brown the top. If not using the cornflake topping, still, brown the top!

Any type of pasta or semolina noodle is fine to use in this recipe. If using a different shape of pasta or noodle, your cook time will be different.  I particularly like to use spaghetti noodles and use a 9 Inch Springform Pan! It is really pretty when you cut into the kugel.

This recipe uses a bit of a natural release and the total time is figured into that, so only the cook time needs to be adjusted. The natural release time allows for a little pressure to release, so that the starchy water can settle and not spit out through the pressure valve when the pressure is released. 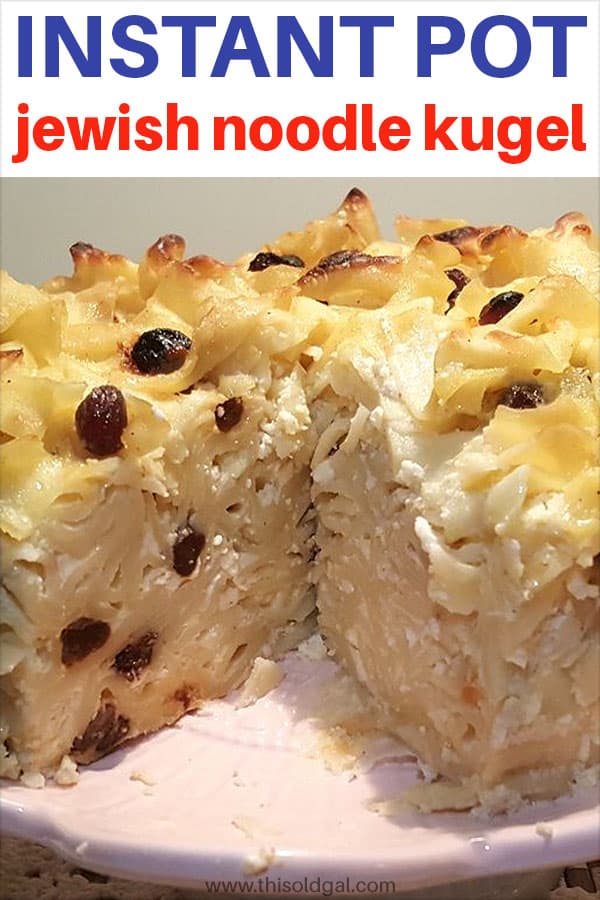