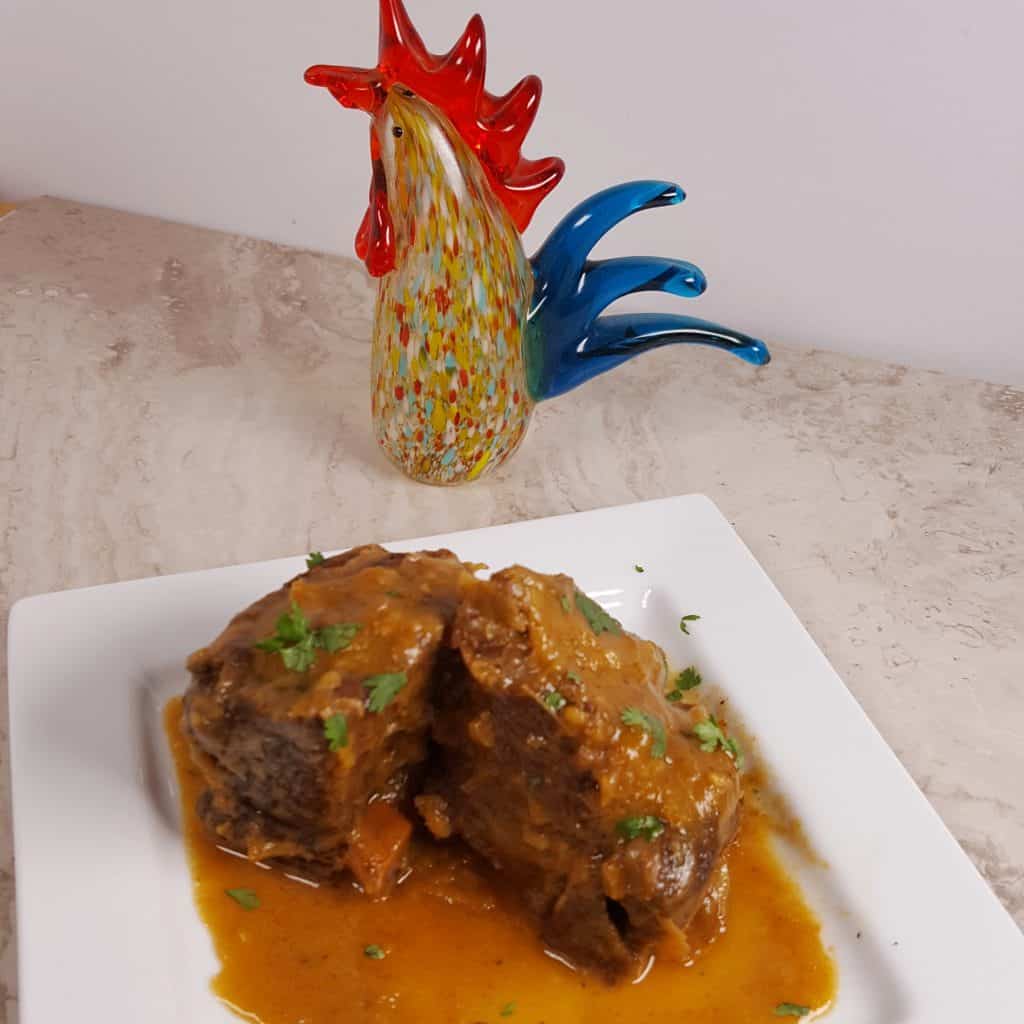 As you can tell from my recipes, I am a huge fan of food from the Orient.

Growing up in Miami, afforded me, many wonderful flavors at an early age.

It was always such a treat to go out to dinner.

Miami had lots and lots of Chinese, Japanese and Thai food restaurants already in place, when I was a kid.

Cuban restaurants started popping up in the early 70’s. My Yuca Fries with Creamy Curry Mustard Sauce are very Miami!

It’s a very diverse place and one I love. 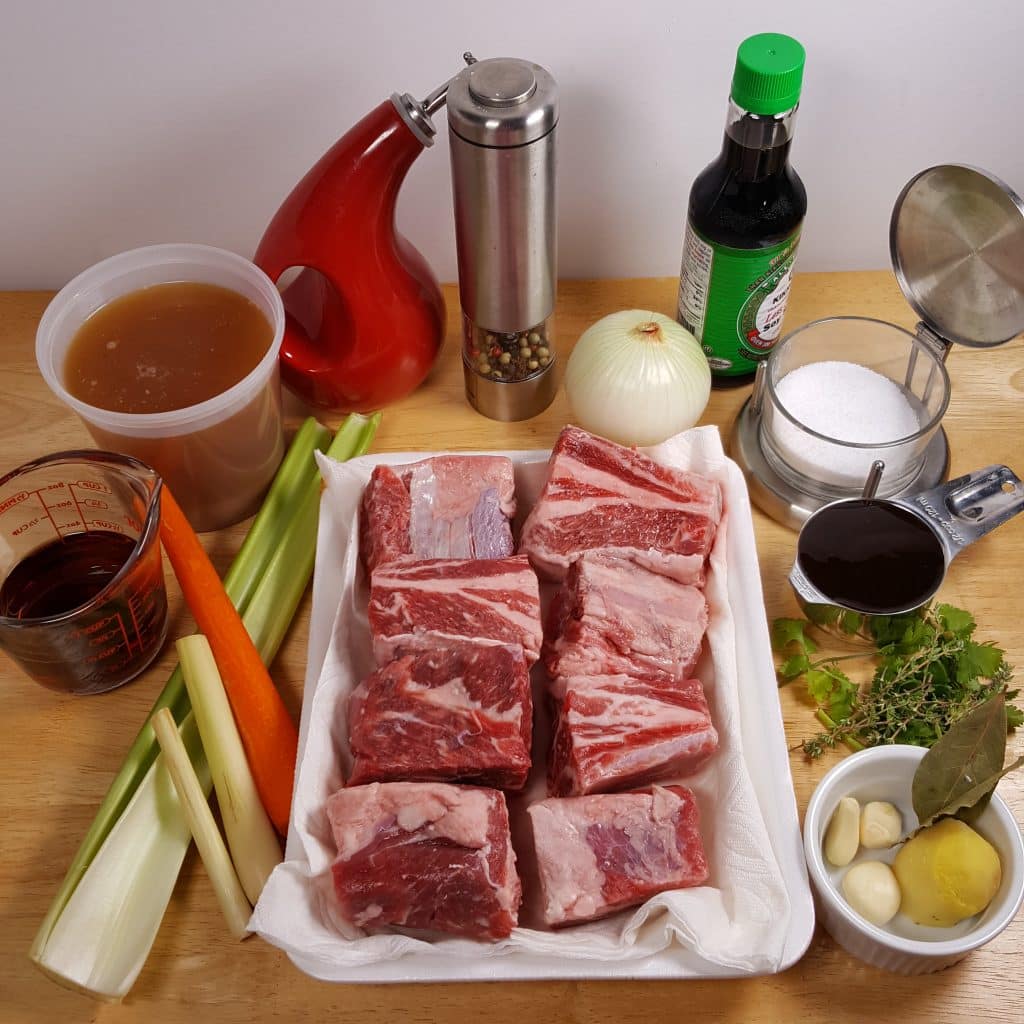 In 2011, Marcus Samuelsson, owner of the Red Rooster Harlem Restaurant, hosted a campaign fund raiser dinner for President Barak Obama for the 2012 election.

He chose Short Ribs, with an Asian flare for the main course. What an awesome choice, but not surprising as he is a man of good taste.

Being a HUGE fan of Asian cuisine, I had to convert his recipe for the Instant Pot, Ninja Foodi or Pressure Cooker. 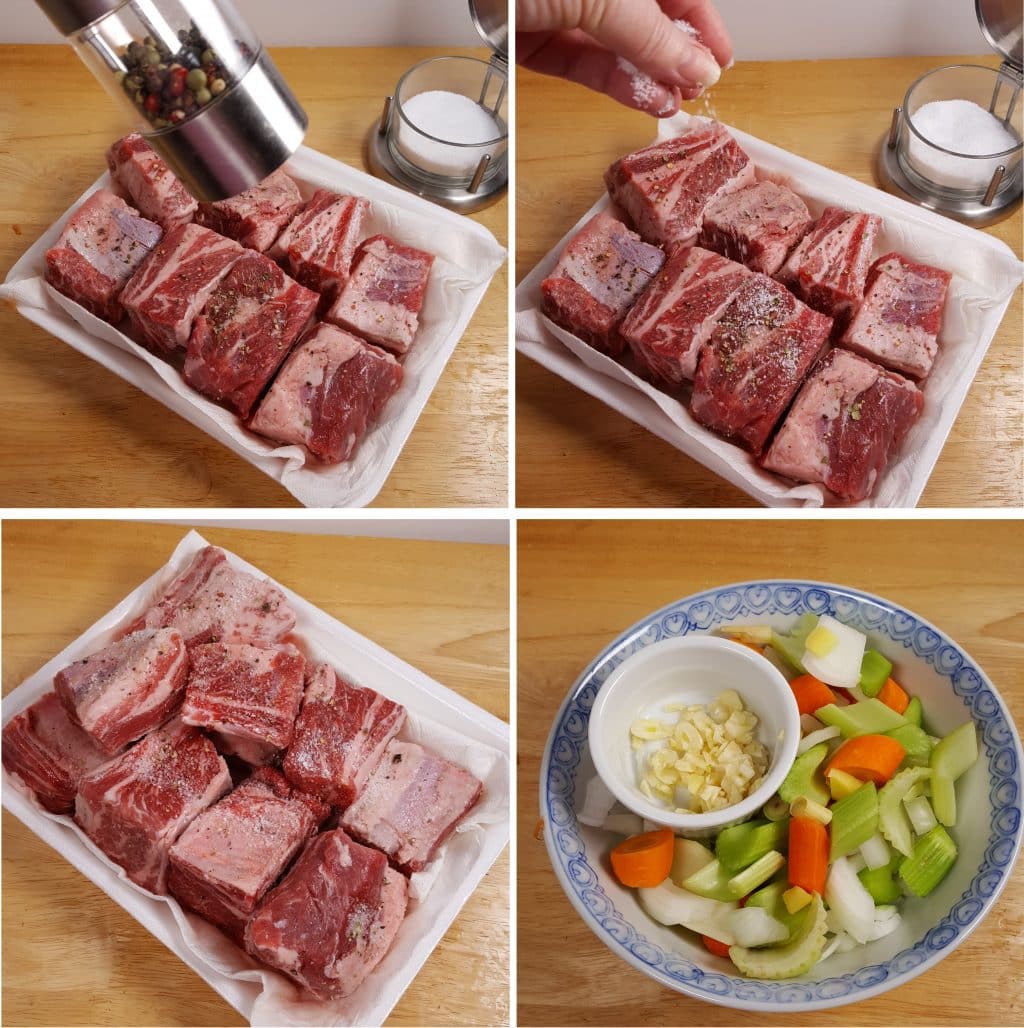 Season the Ribs, Chop the Veggies

Short Ribs are a tough cut of meat, which are perfect for cooking in the under pressure.

Short Ribs are great to cook in advance, as they taste better the longer they sit and fuse with the braising liquid.

Plus, you can easily remove the layer of fat!

If you love Short Ribs, try my Pressure Cooker Red Wine Braised Short Ribs, which are equally as delicious. 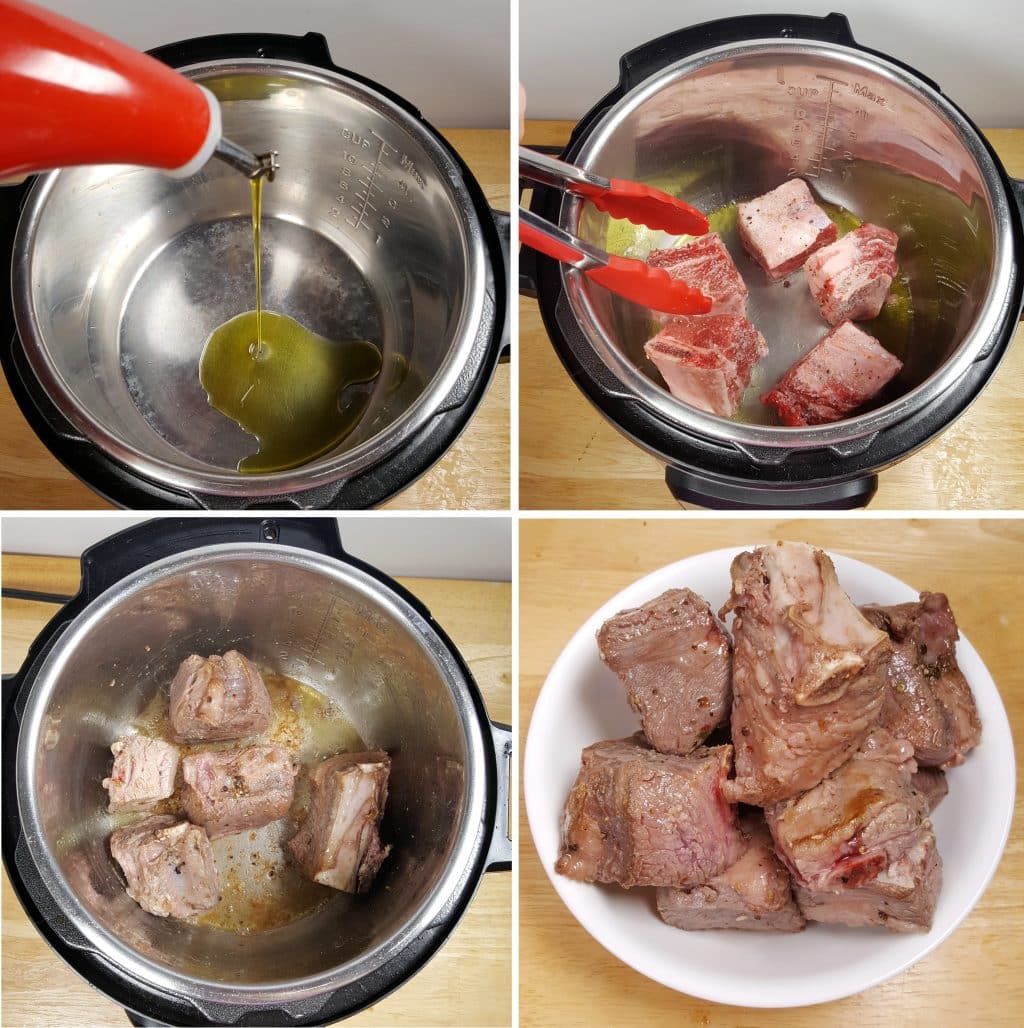 Sear the Ribs and Remove to a Plate

Heat up the Pressure Cooker.

The Short Ribs get a nice sear in some avocado oil or Grapeseed Oil. If there is another oil which you prefer, go a head and use your favorite.

Use Tongs and Sear on all sides.

Then they are removed to a Plate. 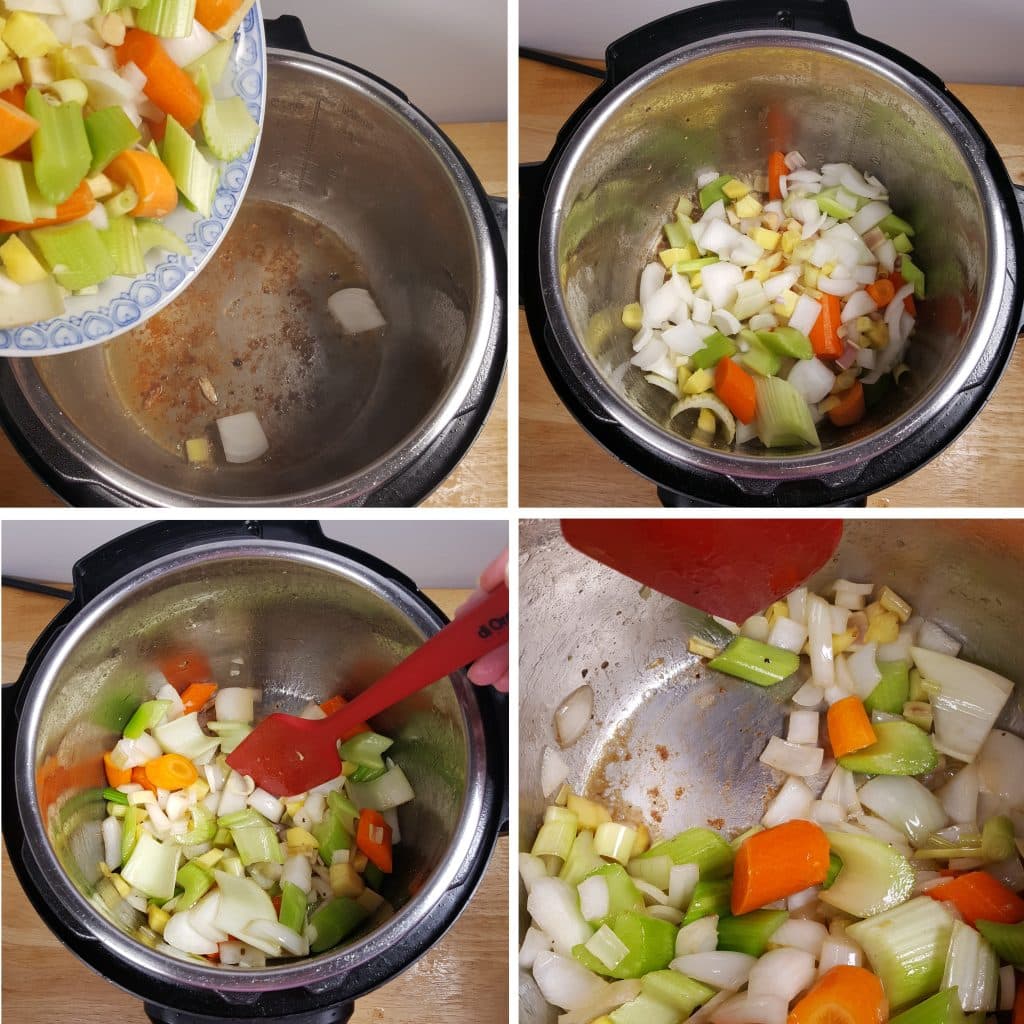 Lemongrass, Plum Sauce, fresh ginger, oh my! Did I mention that I am a HUGE, HUGE fan?

The Brown Bits in the bottom of the Pressure Cooker have tons of flavor.

As the veggie cook, some of the Brown Bits will loosen and add flavor to the vegetables.

My di Oro Living Silicone Spatulas Set holds up really well with a higher heat and are perfect for scraping up the Fond (brown bits). 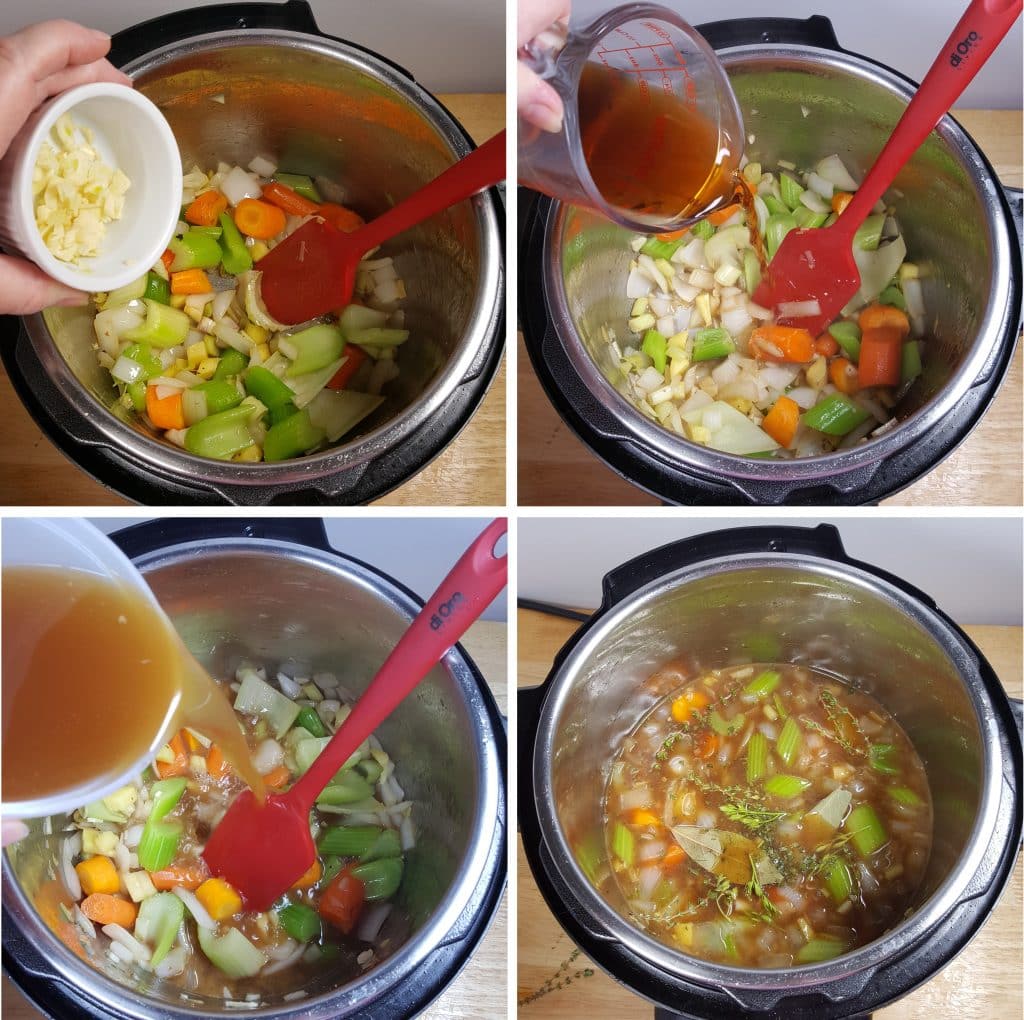 Garlic burns easily, so make sure to add the Minced Garlic after the Veggies are soft.

Pour in your homemade Beef Bone Broth. Or use Beef Base w/ Water.

Add the aromatics and let the braising liquid come to a boil. 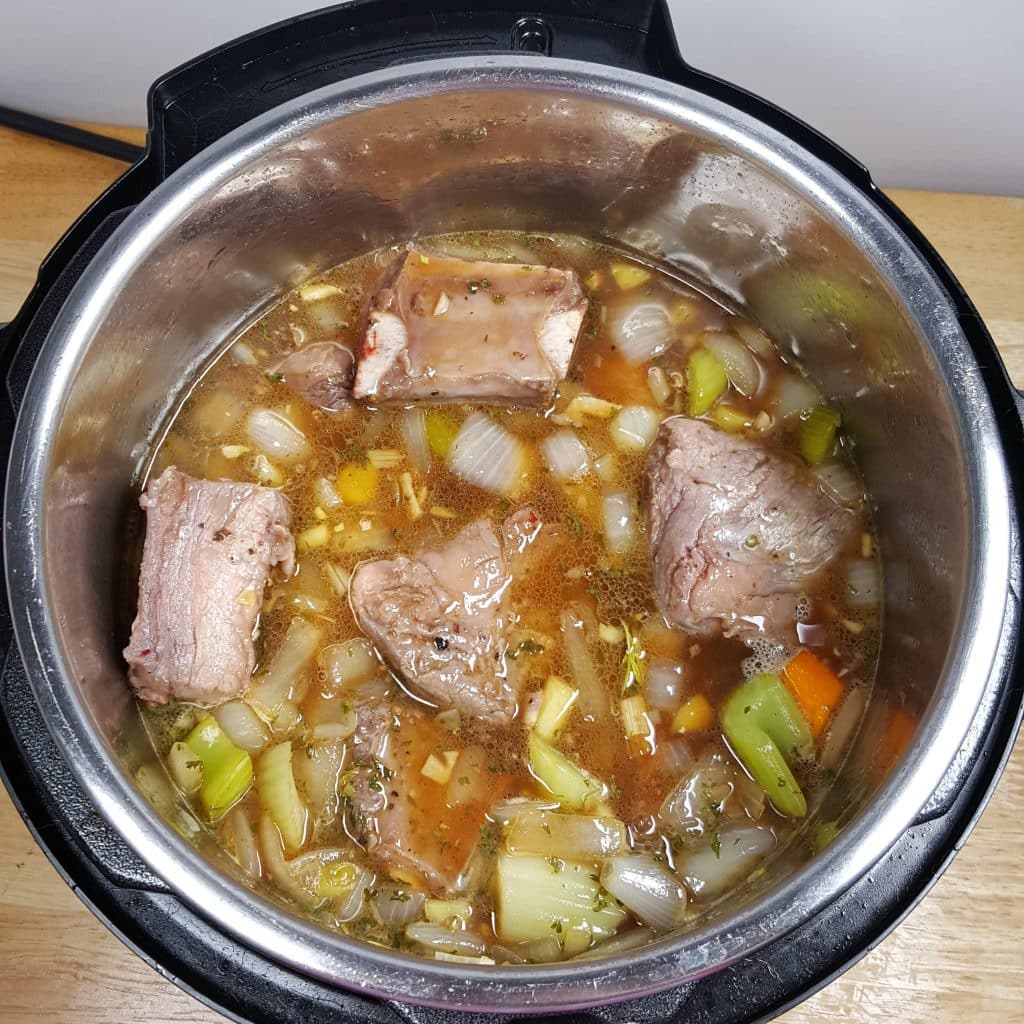 Sink the Short Ribs into the delicious veggie sauce and aromatics.

Don’t the Short Ribs look happy in their Steam Bath? 🙂

The luscious liquid and veggies will make a delicious rich Sauce. 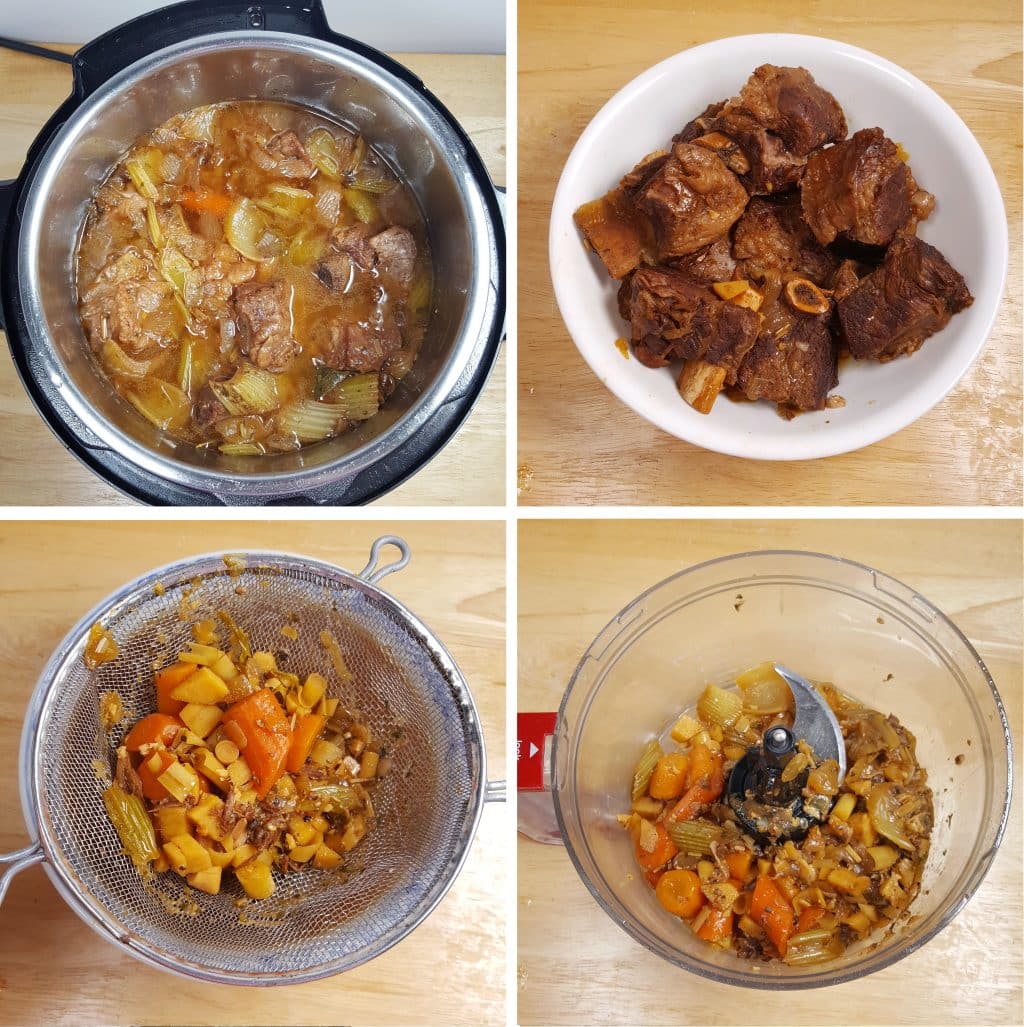 Remove the Short Ribs and Strain out the Veggies

The Vegetables and the Braising Liquid will become the Sauce for the Pressure Cooker President Obama’s Short Ribs.

Remove the Short Ribs to a plate and prepare the Sauce.

If making this in advance, place the liquid in the refrigerator and the Fat will rise and make it easy to remove.

Use a Food Processor to Puree all the Vegetables. 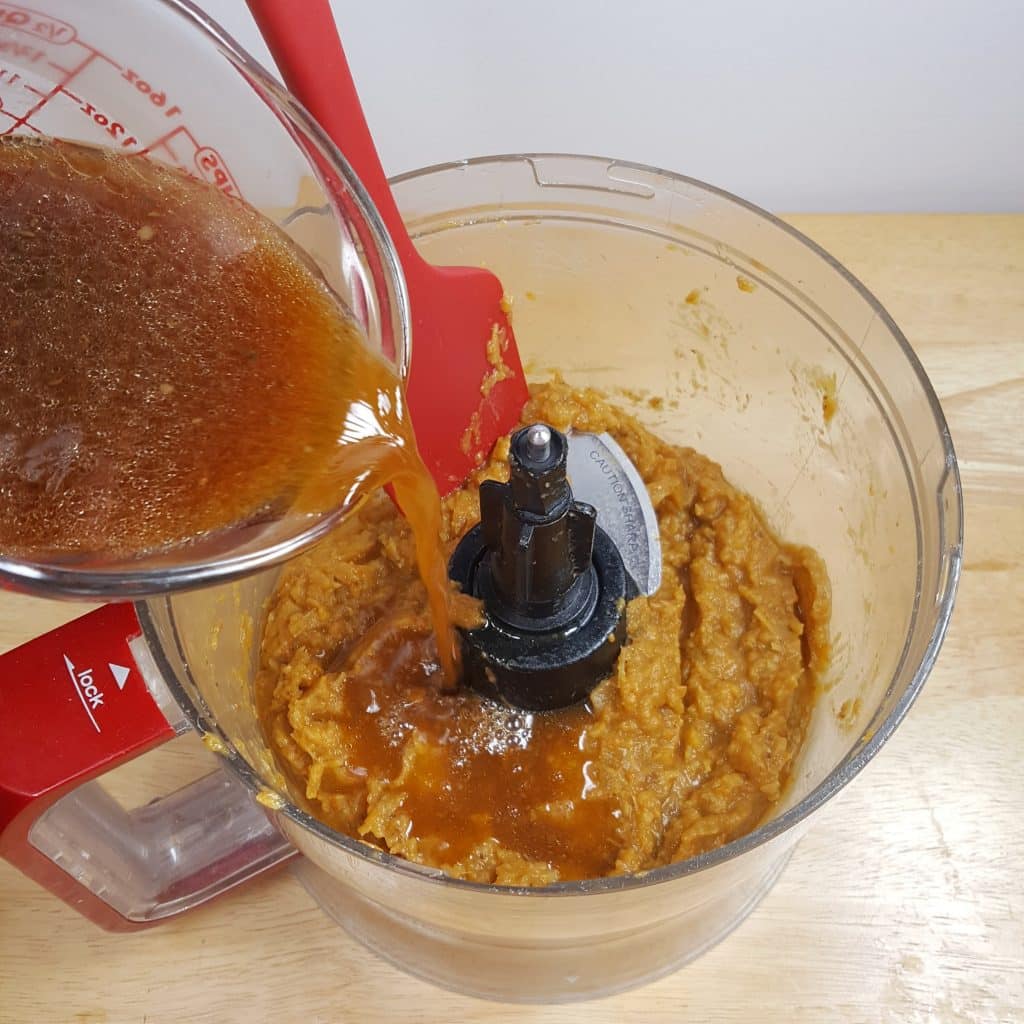 Combine some of the Braising Liquid with the Vegetable Puree 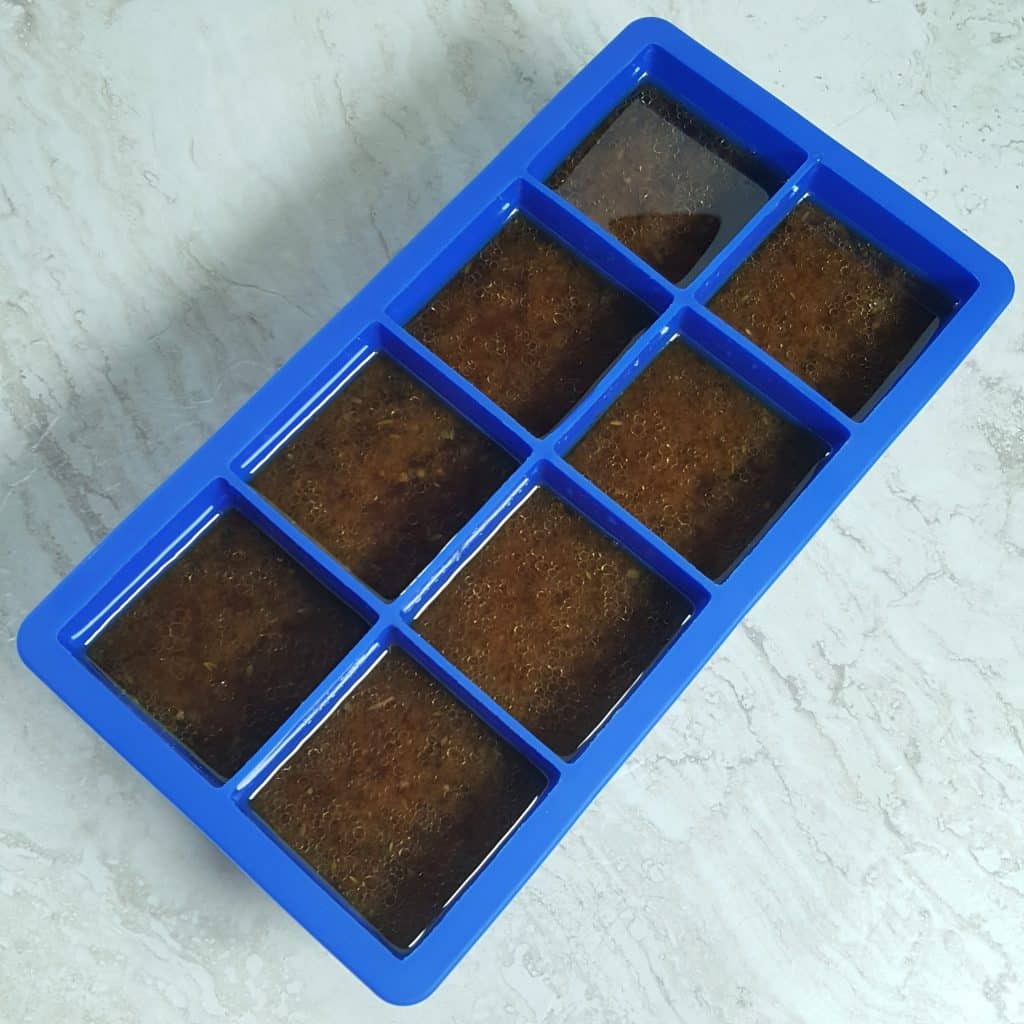 The Braising Liquid is so delicious. Save some in Ice Cube Trays. 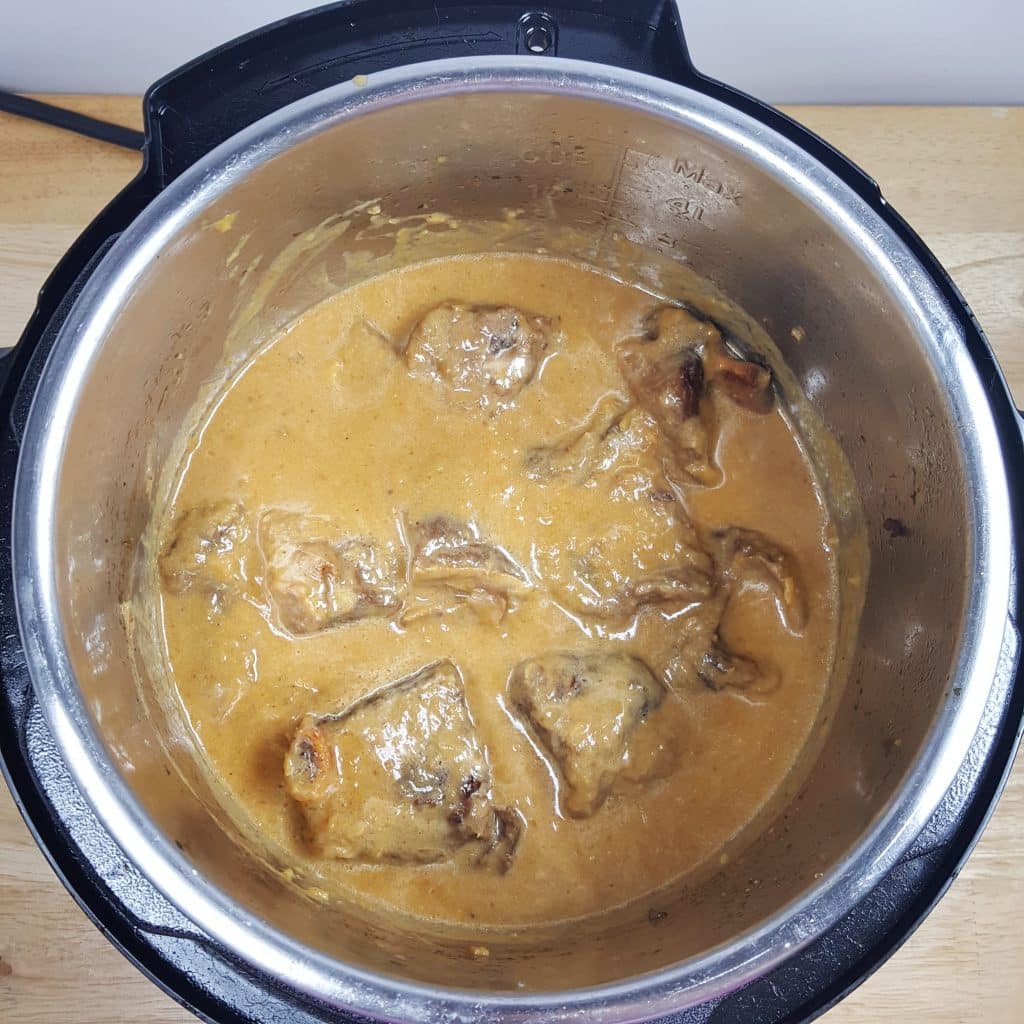 Warm the Short Ribs and Sauce

If eating the same day, after removing the Fat from the Braising Liquid and making the Sauce, place Ribs back into Pressure Cooker with Sauce and keep warm, until ready to serve.

The Short Ribs taste better if allowed to sit in the Braising Liquid overnight. If preparing the day before, place in refrigerator, so that fat will rise to the top.  Remove fat. Bring to a simmer on Stove or in Pressure Cooker. 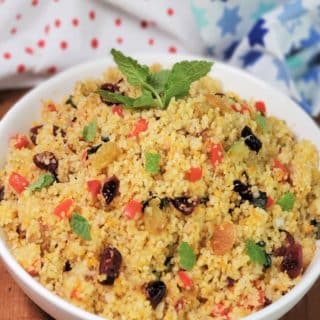