Pressure Cooker Maple Bacon Cheesecake is sweet and a bit salty and made with fresh Candied Maple Bacon and Pure Maple Syrup. 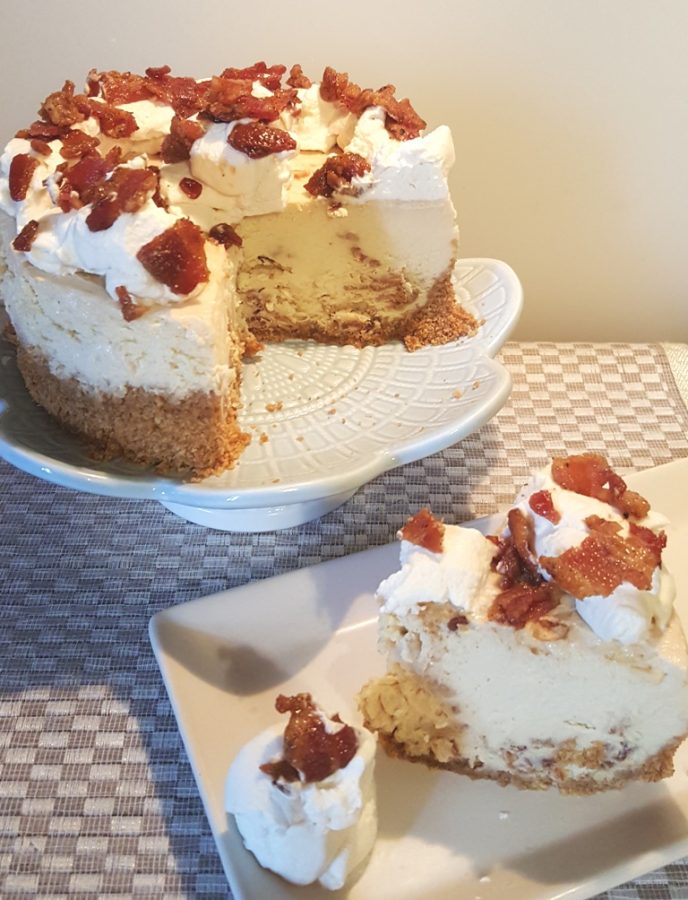 I know this is crazy. Bacon in a cheesecake? Well, Maple Bacon Doughnuts are all the rage, so why not?

I mean, it’s not fried like a doughnut, so it’s not as fattening, right?

Ahhhh, I wish. Before you go all, oh my G-d, this is so bad for you, how could she do this, remember, this is a specialty cheesecake and one you won’t want to eat every day. It’s okay to indulge every once in a while.

This recipe uses Grade A Pure Maple Syrup, so that’s something, right?

Cooking cheesecake in a Instant Pot, Mealty MultiPot or Pressure Cooker is so much easier than cooking it in the oven with a water bath. 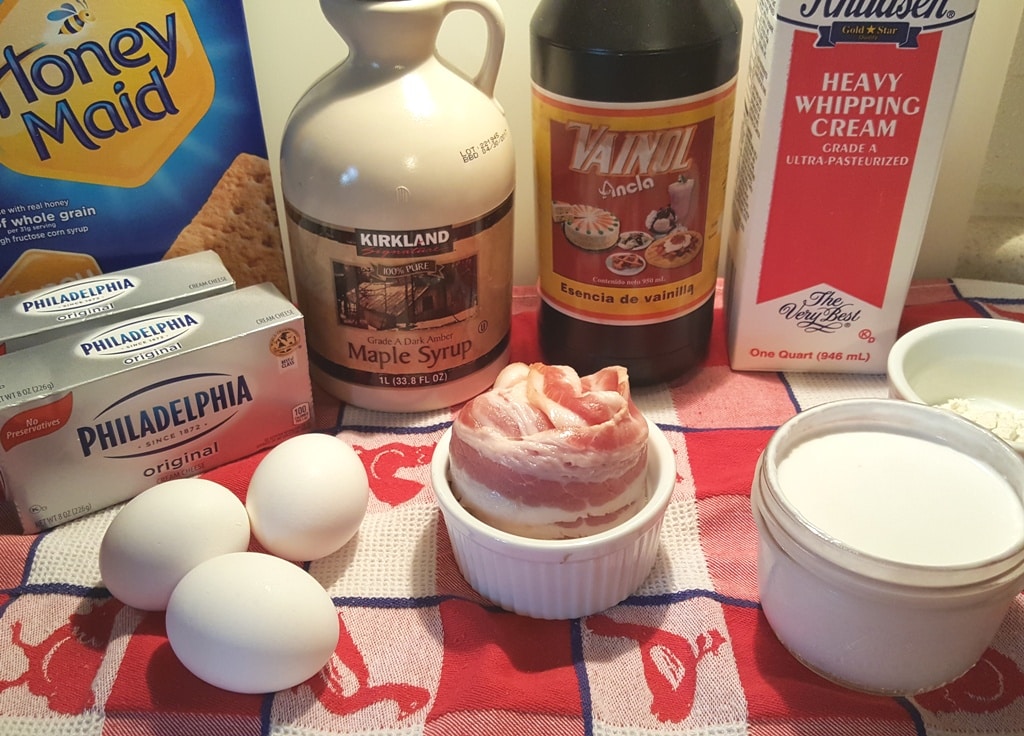 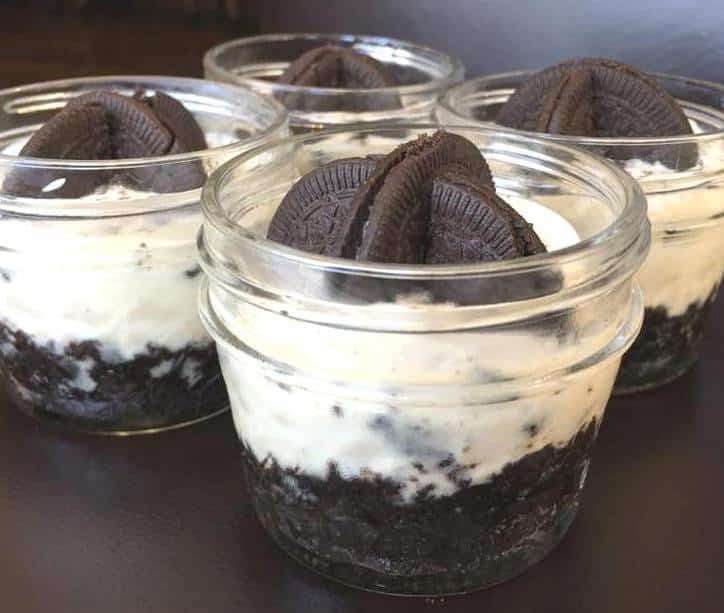 Some people like to make individual size cheesecakes using Mason Jars. If you would like to do that for this recipe, you will only need six Kerr Half Pint (8 oz) Mason Jars or 12 Ball 4 oz Mason Jars.

They can be made with or without crust. Just divide the crust (if using), filling and topping equally between each jar.

Other Yummy Cheesecakes to Try:

For a Lighter Cheesecake 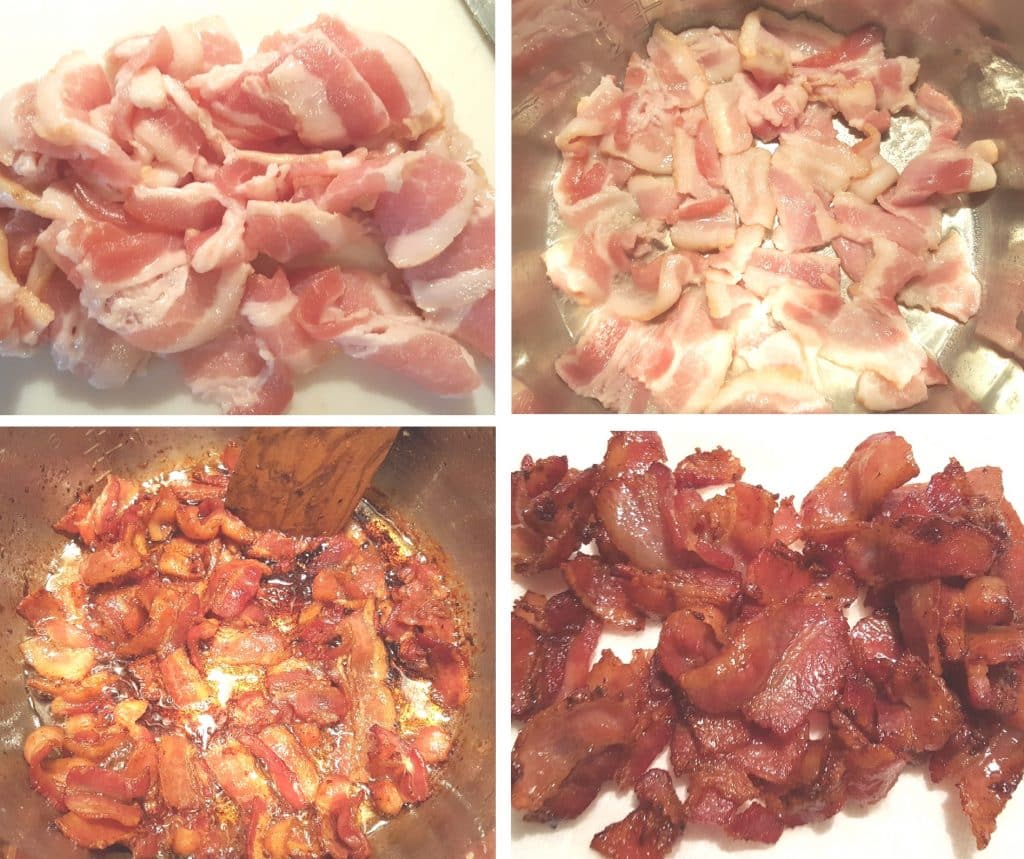 Select Sauté or Browning on your Pressure Cooker and allow to fully heat. Heat a stainless steel pot before adding the fat, will help to make the pot non-stick.

Chop the bacon into pieces and add it to your Instant Pot or Pressure Cooker cooking pot. Add a bit of water. Don’t worry, you won’t get splattered with grease. Adding water and allowing the bacon to cook for a bit will give you straighter pieces of bacon, as the fat will render better.

Allow the bacon to cook for a bit and then mix  it around the cooking pot. When the water is almost evaporated, add some Pure Maple Syrup and mix in. Continue cooking until bacon is fully cooked. Make sure you use Grade A Maple Syrup, not pancake syrup, as that is flavored corn syrup and you want the deep Maple flavor.

Remove the bacon to a paper towel. 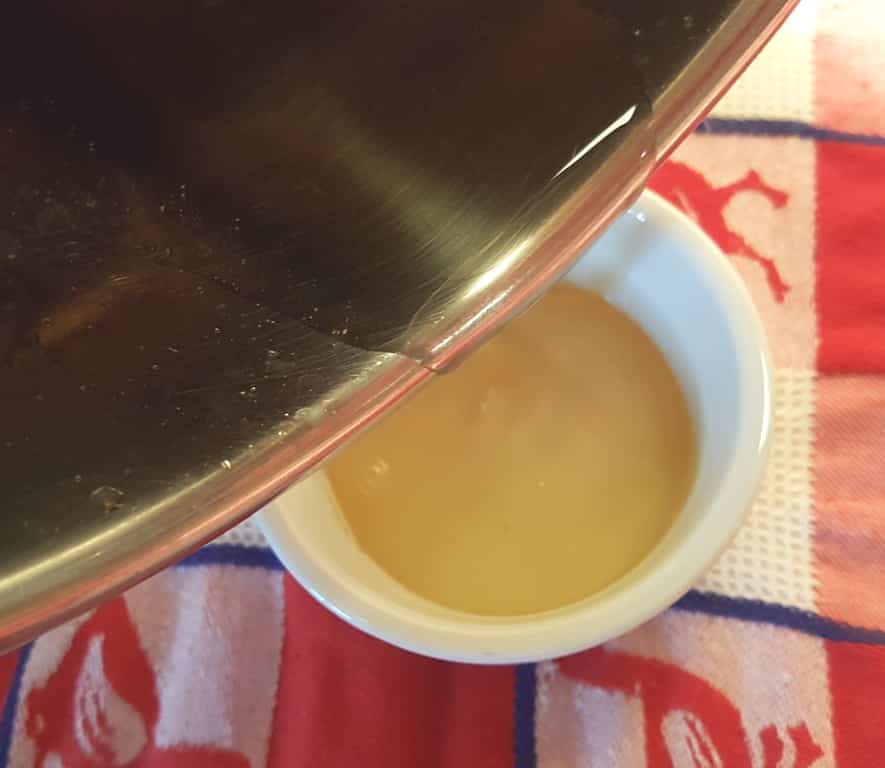 Save the Bacon Grease

Pour the Bacon Grease into a bowl and set aside. Instead of using butter to grease the pan for this recipe, we will use Bacon Grease. What? Come on….. Butter is animal fat and I don’t see you complaining about that! 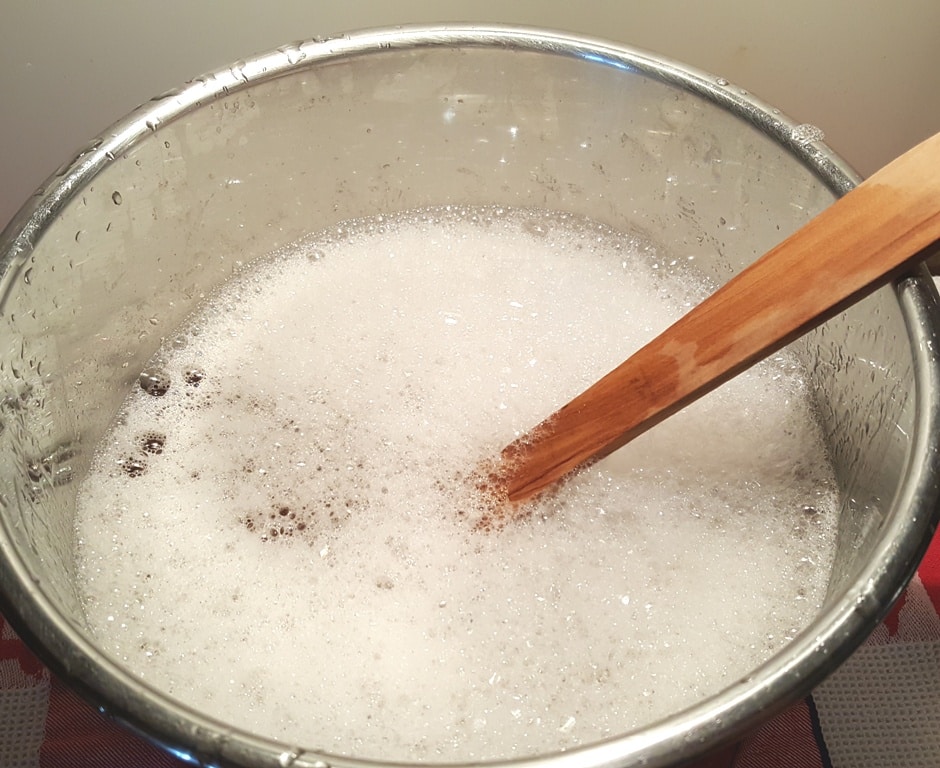 You are probably freaking out about now, wondering how you will ever got your pot clean. Well, don’t worry. Soak the pan now and prepare the crust and filling. Most of the gunk will loosen up and rinse right out.

Then to kill two birds with one stone, we cook the Pressure Cooker Maple Bacon Cheesecake in the same cooking pot and the hot water and steam will loosen the gunk and make clean up a breeze. And oh yeah, we’ll cook a cheesecake too! 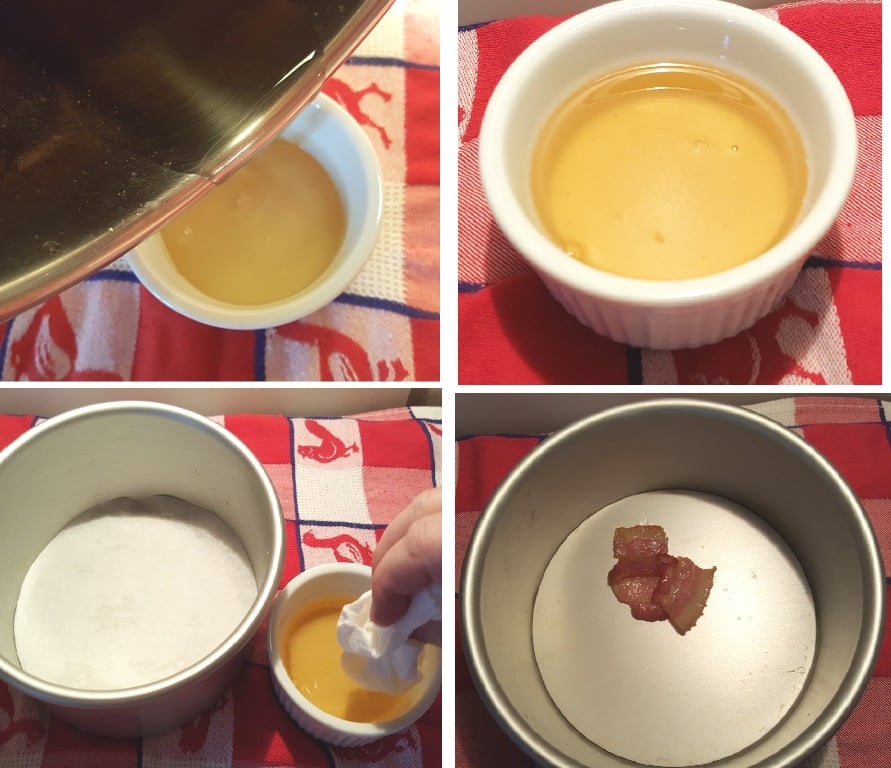 I prefer the 6″ Fat Daddio’s Push Pan, because clean up is so very easy, but some people prefer a Spring Form Pan.

I like a 6 inch Push Pan because I like the height of the cheesecake. However, if you have and/or prefer a 7 inch pan and want a taller cake, just make one and a half recipes and you will have a very tall cake. If using an 8 inch pan in an 8 Quart Pressure Cooker (or larger), double the recipe. 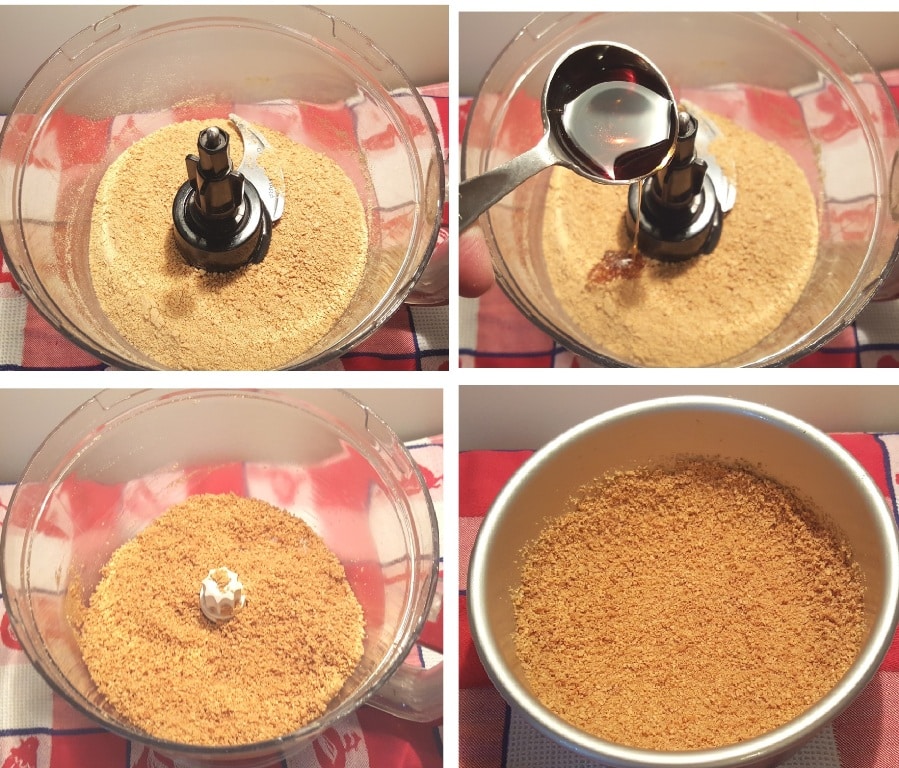 Add the graham crackers to the bowl of a Food Processor. I used cinnamon because that is what I had on hand. Any crispy cookie will work. Pulse until small crumbs form.

If you don’t have a Food Processor, take a large baggie and put the graham crackers inside. Seal it and take a rolling pin and crush the crackers.

Add a little butter and Pure Maple Syrup and process until incorporated. Press the crumb mixture into pan using a Fox Run Tart Tamper or your fingers, forming a neat border around the edge and slightly up the sides.

A tip for this Pressure Cooker Maple Bacon Cheesecake and all other cheesecakes, is that when pressing the crumbs into the cheesecake pan, don’t push them up too high on the sides. You don’t want moisture to get into the crust, causing a gummy crust.

Place the Cheesecake Pan with the crust into the freezer while you are preparing the filling. 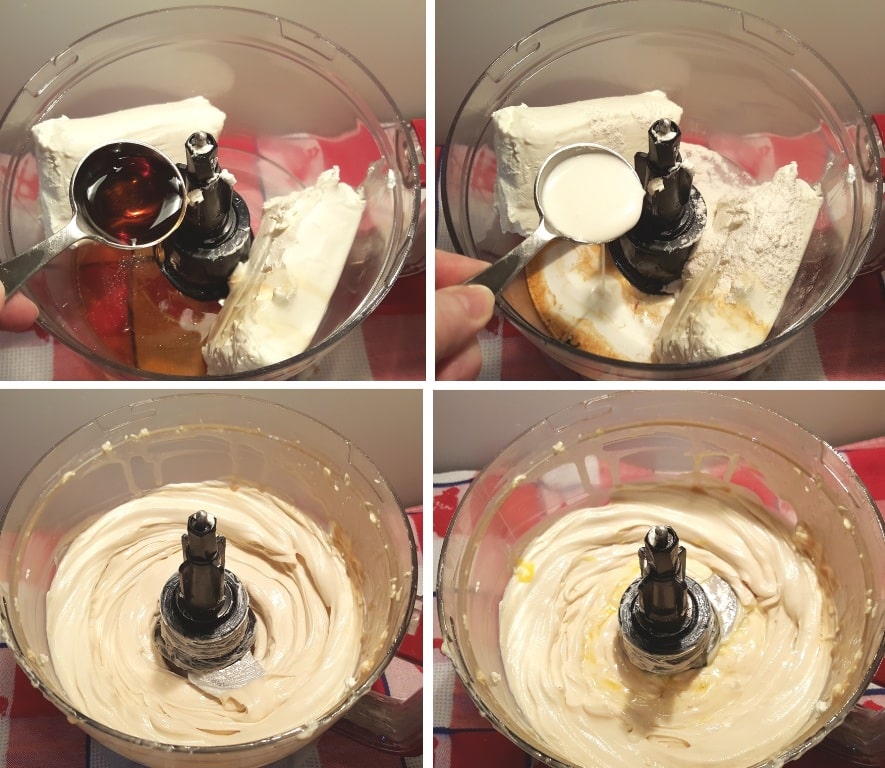 Wash out the Food Processor, so that you can make the filling.

Mix cream cheese, sugar, Pure Maple Syrup, vanilla and cream until smooth. If you don’t have heavy cream and you have some Homemade Greek Yogurt or Sour Cream, either will work well. Process until very smooth. Add one egg. 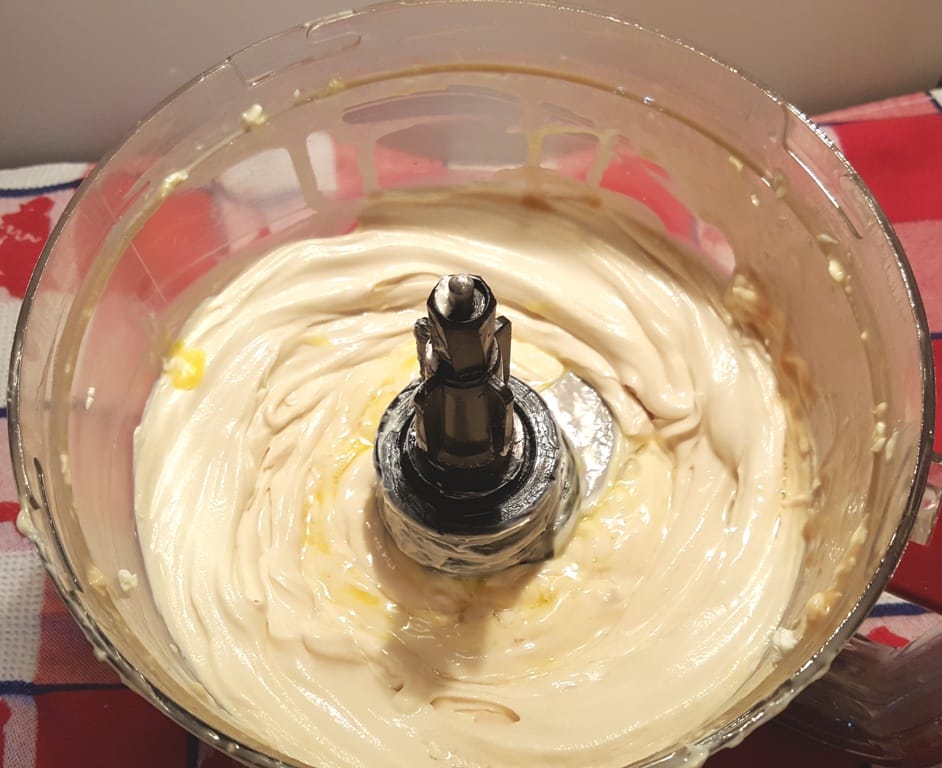 Add One Egg and Pulse One Second

Add just one egg at a time. Use the pulse button for one second after each egg added. It is okay if you see some of the yellow yolk. Look closely at this photo. See how much of the egg is showing and not incorporated? That is what you want!!!!!

Add Flour to the Diced Bacon

Please use Pure Maple Syrup, not the fake stuff. It makes a difference.

To the larger bowl of bacon, add a bit of flour. Using your fingers, incorporate the flour into the Maple Bacon, so that the pieces separate. This will help when mixing into the filling and will keep the Maple Bacon from falling to the bottom. 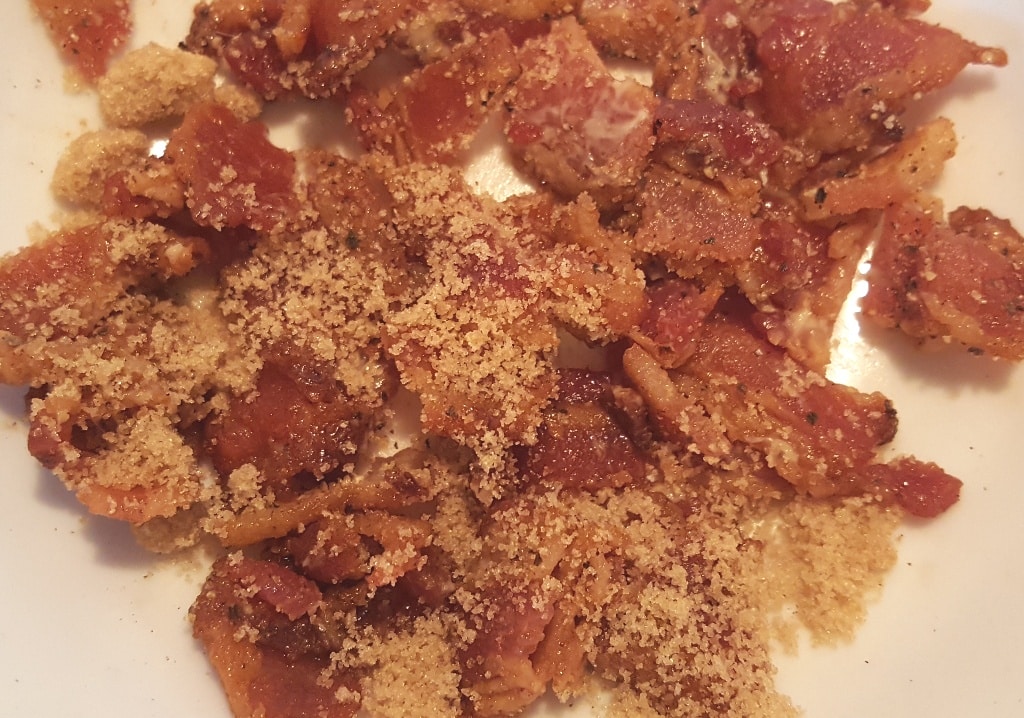 To the smaller bowl of bacon, sprinkle on Maple Sugar and a light dusting of Ground Pepper. Mix through and set aside for the Garnish. 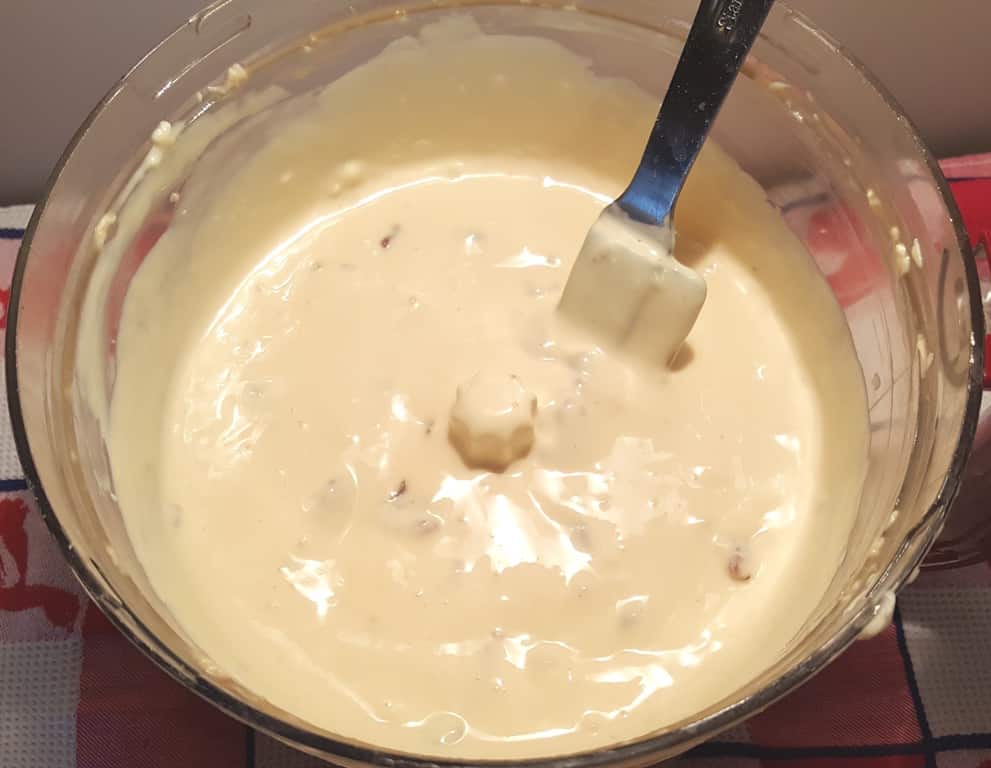 Fold in the Maple Bacon

Remove the blade from the Food Processor and fold in the Candied Maple Bacon, which you have just floured. It will easily incorporate into the filling. 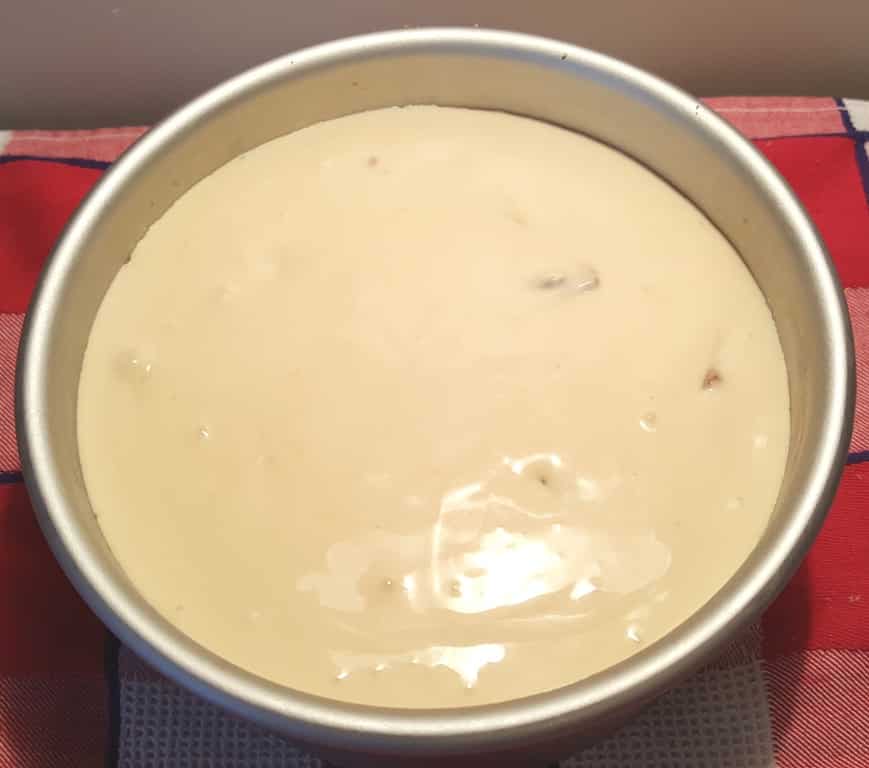 Pour the Cheesecake Filling into the Prepared Pan

Remove the cheesecake from the freezer and pour in the filling. Wiggle the pan, so that the filling is evenly distributed and flat. 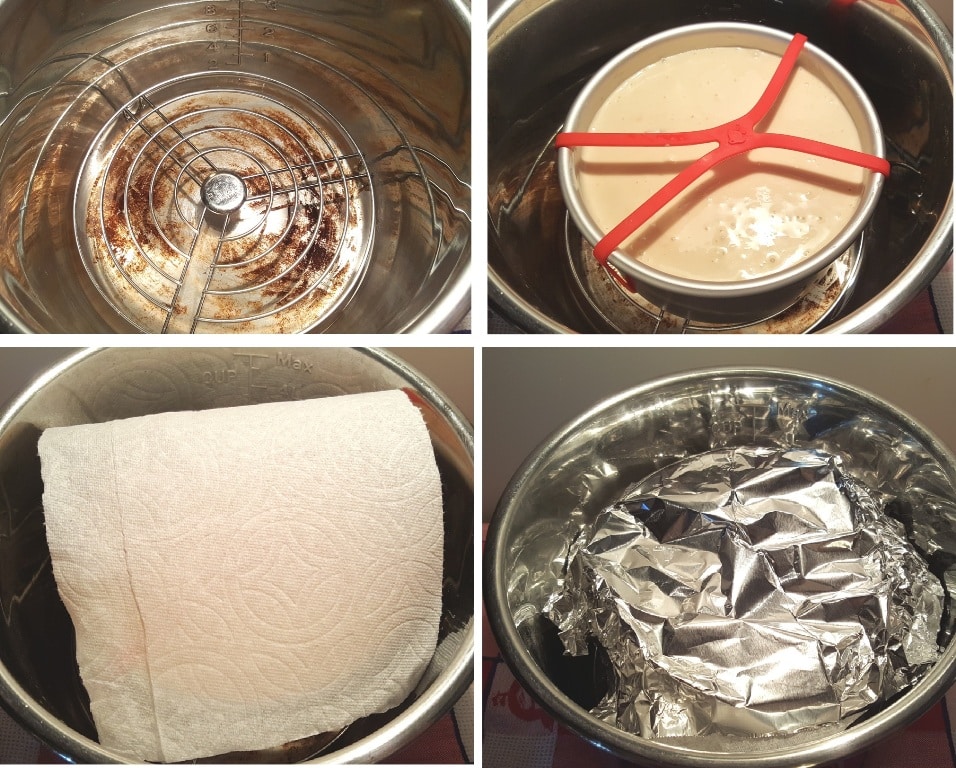 The foil should be loosely covering the pan. If it is secured all around, the cheesecake will not cook enough and then you will wonder why your cheesecake is runny in the middle.

If any moisture gets on the cake, just dab it off with a paper towel. 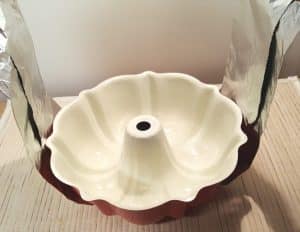 Please see my article on Making and Using a Foil Sling in the Pressure Cooker.

It is cheap to make and you will find yourself using it all your Pot in Pot cooking. If you don’t want to make this Homemade Sling, you might prefer this Silicone Sling/ Vegetable Steamer which is a nice product.

Some people like to use  Grafiti Bands Cross Style as they make it so easy to get pans and bowls in and out of the Pressure Cooker. The Grafiti Bands will hold the paper towel in place nicely, as well 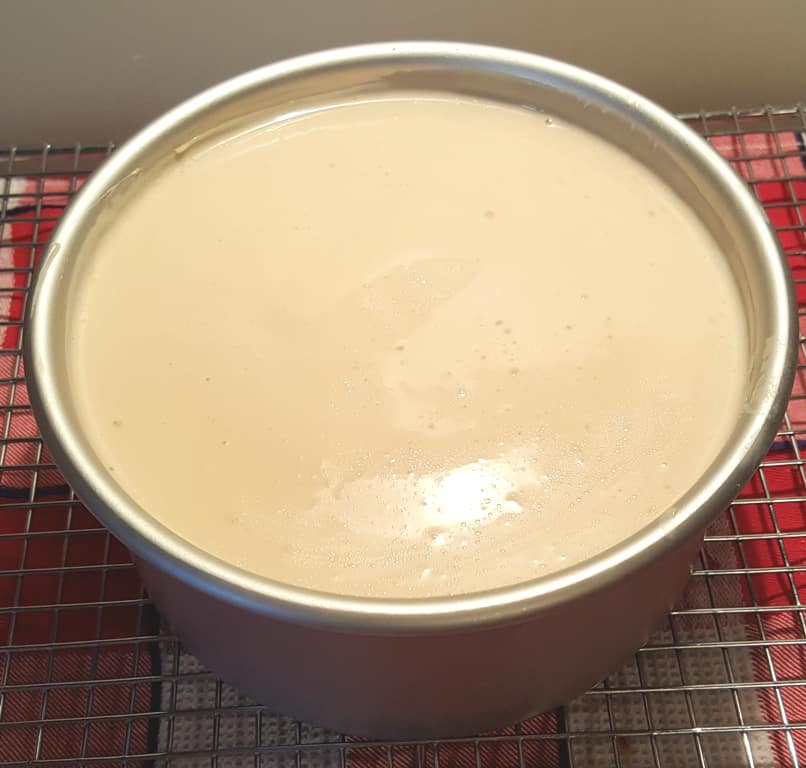 Jiggly in the center of the Cheesecake is good

A cheesecake is done before the center of it is set. It will be a bit jiggly in the center and the sides will be slightly higher.

Don’t feel the urge to cook longer or else the top will crack. The heat that is trapped inside will continue to cook the center while the cheesecake cools.

Look how nice and flat this Pressure Cooker Maple Bacon Cheesecake is….perfect outcome. Let the Cheesecake sit on the counter for about an hour and then move it to the refrigerator. 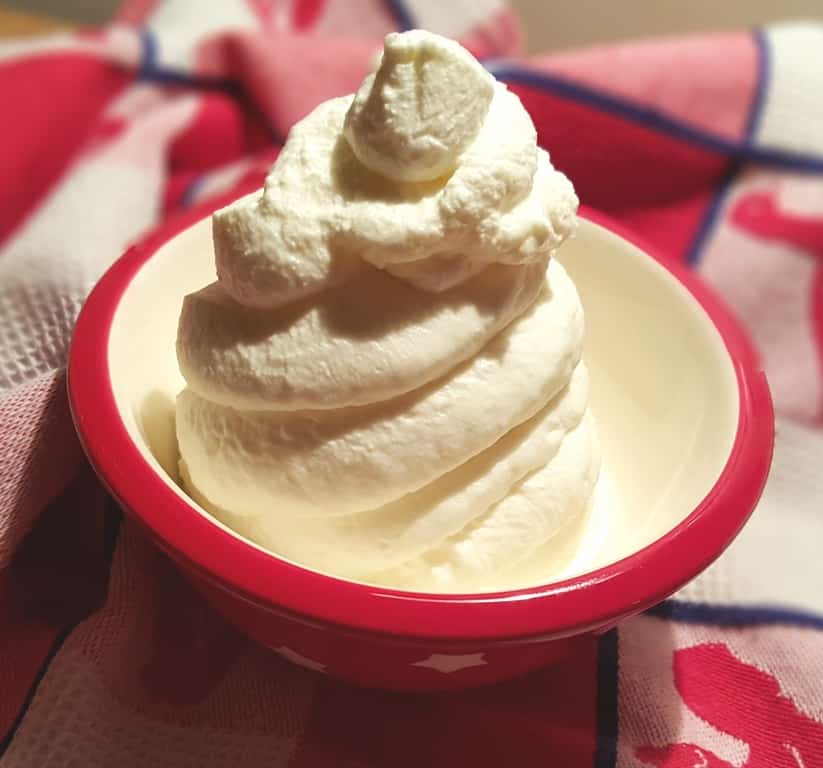 Place the Whipped Cream into a baggie to make it easier to Pipe onto the Cheesecake. Keep in the refrigerator, until ready to Garnish the Cheesecake. 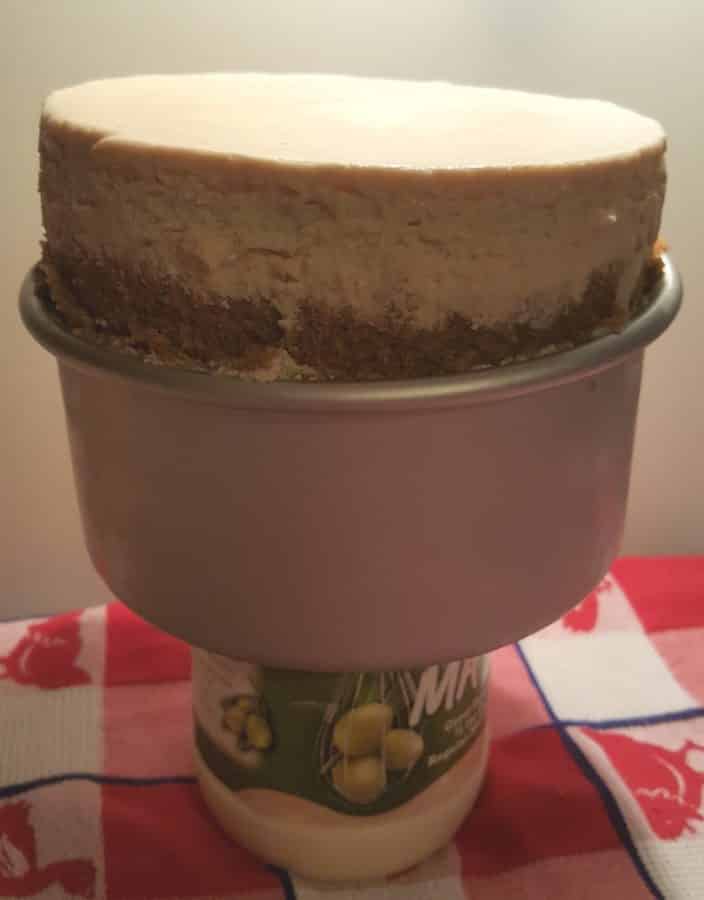 It’s safe to remove the sides from the Cheesecake after a couple of hours in the refrigerator.

Any jar that will fit into the opening of the Push Pan will work. I usually remove the sides of the Push Pan after a couple of hours in the refrigerator and then cover and chill until the next day.

It will taste much, much, much, better. Really, I am not joking. Your Pressure Cooker Maple Bacon Cheesecake will taste pretty good on the same day, I suppose, but will taste incredible the next day.

I use this LamsonSharp Chef’s Slotted Turner to remove the cheesecake to a plate. It’s super thin and fits easily between the Cheesecake and the base of the pan. It is not a good idea to cut the cheesecake on top of the Push Pan base, as it will scratch and sticking will become a problem.

Pipe on your Perfectly Homemade Whipped Cream over the Cheesecake.

Sprinkle the Peppered Maple Bacon over the Whipped Cream.

Grab a fork and enjoy. This Pressure Cooker Maple Bacon Cheesecake really doesn’t need another topping, but, if you want to make it even more sinful, try some Gooey Hot Fudge Sauce.  Now that is decedent.

Nutrition Facts
Pressure Cooker Maple Bacon Cheesecake
Amount Per Serving (0 g)
Calories 504 Calories from Fat 261
% Daily Value*
Fat 29g45%
Saturated Fat 10g63%
Cholesterol 146mg49%
Sodium 1035mg45%
Potassium 436mg12%
Carbohydrates 35g12%
Fiber 0g0%
Sugar 24g27%
Protein 23g46%
Vitamin A 270IU5%
Calcium 321mg32%
Iron 1.4mg8%
* Percent Daily Values are based on a 2000 calorie diet.
Tried this recipe?Mention @ThisOldGalCooks or tag #thisoldgalcooks!
© ThisOldGal.com - Sharing the recipe link to this post is both encouraged and appreciated. Unauthorized use of this material, including, screen shots, copy/paste of full recipes to any social media site, website, copying into the copymethat app, cookbook, without written permission from Jill Selkowitz is strictly prohibited and in violation of our copyright protection. You may share a photo with a link back instead. 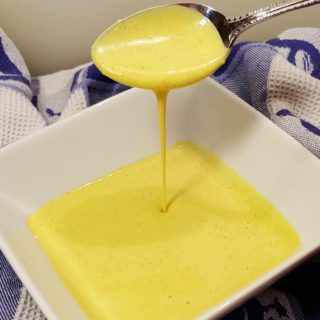 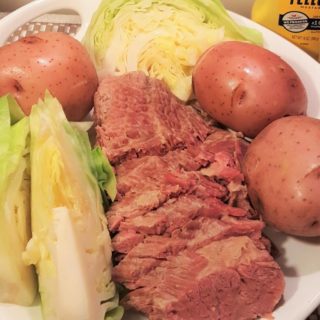 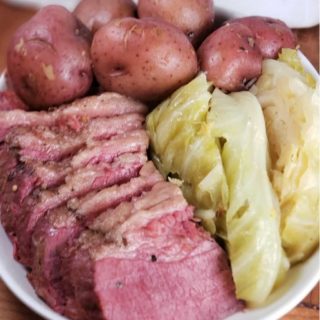 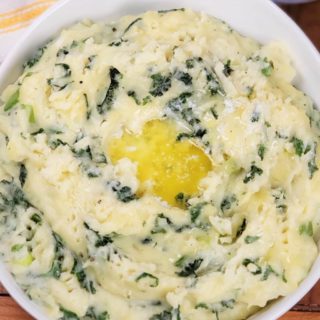